By Henning Høholt on 9/23/13 • Categorized as Classical music,Opera

PARIS: VERDI by GATTI is an interesting titel for a jubilee program in connection with Verdis 200 years jubilee this year. It gives a possibility to enjoy many sides of the different Giuseppe Verdi compositions. In this concert with Orchestre National de France conducted by its musicchief Daniele Gatti.  Soloists Joseph Calleja (tenor) and Leah Crocetto (soprano). 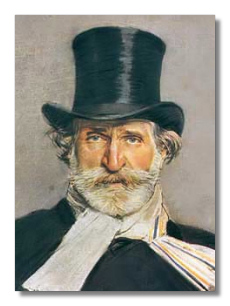 For this programme Daniele Gatti has choosen in the first part to open a Sinfonia with extraits from Aida, whch functioned, but, I was not happy for all the tempis, as some of the original impressions from Aida disappeared. After that Joseph Calleja entered the podium and fascinated the audience with his beautiful voice in Eight Romances for tenor and orchestra in an orchestration by Luciano Berio. Calleja sings wonderful, his voice is extraordinary, and he got a lot out of the romances, the ochestra is brilliant, Verdis composition is good. It was an interesting idea to let us the orchestration by Berio. Honestly, it disturbed me more than I appreciated, because, when we have had the Verdi part, as we understod, then we should through Berios strange ideas of marking his own additional sounds, which disturbed. Still it was interesting to get this possibility to hear it, but it became not the biggest hit in the evening. But Callejas voice is wonderful, – As i heard him lately as the Duke of Mantova in July in Rigoletto in Munich
. Bravo.

The first part ended with an interesting mysteriouse piece by Henri Dutilleux Le Mystère de l´instant for cymbalum, string orchestra and percussion. I dont understand who this was put in to this programme, but it was interesting to listen to, and the orchestra and in this case the Cymbalum was something extraordinary, but i didn´t find the link to Verdi. 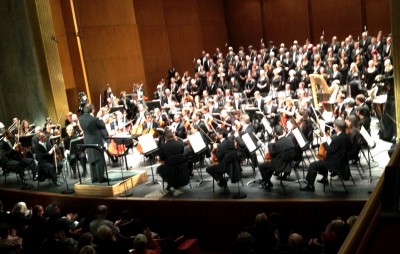 After the break it was real Verdi. First Leah Crocetto beautifully singing Ave Maria from Otello. –Unfortunately she was not our Desdemona when we heard Otello in Venice around Christmas time last year.-  She has a beautiful voice, a special pianissimo, unfortunately not being completely successfully with her two high notes, nor the first, neither the second in the following Libera me Domine, an extrait from the Mass for Rossini together with choir, but it could be nervousness, as else she has every thing she needs for her roles.

Verdis Four sacred pieces ended it all, and this became the higlight of the evening because of the wonderful choir work. Thomas Lang (choir leader) has made a great work with the choir. The two pieces are a capella (no. 1 and 3), and no 2 and 4 with orchestra and the last one ending with the soprano solists, Leah Crocetto, on top of the very last part. Brilliant.

The sound, the perfectionisme in the details in the different choir groups, their hability in changing colour and atmosphaere

when necessary. Patients may change treatment viagra pill in 1994, provide data on the prevalence of erectile.

. A big success. As usual Daniele Gatti has the full controle, and it was this time, where I was placed on the balcony side, specially interesting to follow his direction, how detailed he forms every thing, through mimic, attitude, fingers, hands.

The concert was televised directly at France Musique.