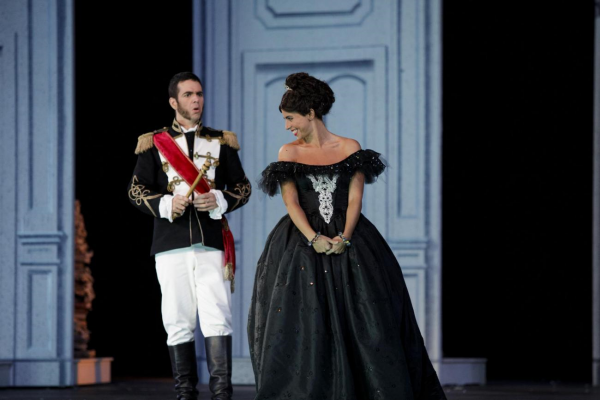 FIRENZE/ITALU: La Cenerentola by Gioachino Rossini is the first opera of the current Florentine summer season staged in the magical scenery of the Ammannati Courtyard at Palazzo Pitti in Florence. This location seems quite suitable for an opera of the beginning of the Nineteenth Century as this one (La Cenerentola was premiered in 1817), with a fairly small orchestra and a staging, being director Manu Lalli with the fun and moving scenes by Roberta Lazzeri costumes by Gianna Poli ad good light designer Vincenzo Apicella, that is characterized by a pleasant visual impact.

The audience, made more by tourists than by Florentines, was sufficiently large for a small space like the Courtyard, and overall enjoyed a performance that was over an average level of “summer performances” made for a not overtly demanding audience.

This opera was characterized above all by the theatrical and musical rhythm impressed by stage director Manu Lalli and conductor Alessandro D’Agostini. Ms. Lalli showed good ideas but seems to be suffering from a sort of horror vacui, in fact as the music ripples or becomes somewhat “dragging” she doesn’t resist to the temptation to overcrow the stage with mimes and ballet dancers incursions. That is disappointing in the long run, also because at some moments the director shows interesting ideas and good hand, beyond the perhaps too insisting reading of the plot of this opera as a “novel”, and large volumes of novels (including “Pamela” “Wuthering Heights” and “Jane Eyre “) are almost always on stage
. A really magical moment is the scene of the thunderstorm, aroused by Alidoro as a new Shakespearean Prospero, with the walls of Ammannati Courtyard and the Fontana del Carciofo (located at the top, just above the stage backdrop) illuminated with mastery under the full moon, this of course true. 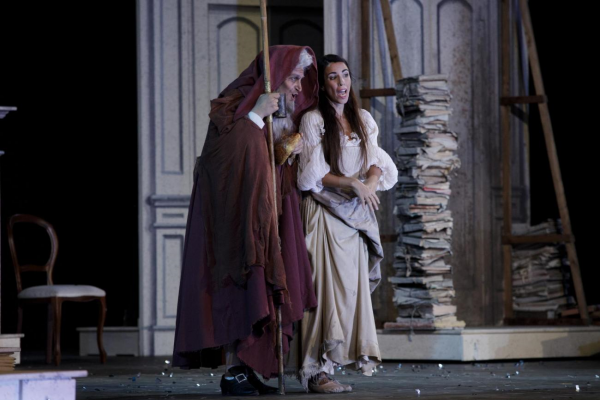 The singers’ acting was obviously influenced by this very “rhythmic” and a little too much over the top setting, but overall I haven’t to notice great censurable tasteful falls, being also on stage the real “added value” of two authentically experienced actors, two “stage animals” like Giorgio Caoduro as Dandini and Marco Filippo Romano as Don Magnifico (their duet of the 2nd act was irresistible both musically and scenically), in fact the more enthusiastic applause of the Florentine audience were for them
. The scene by Roberta Lazzeri was made of agile revolving elements, on which colorful costumes by Gianna Poli stood out.

Conductor Alessandro D’Agostini seems to know very well this opera, extolls the rhythm as well as the refinements, keeps together orchestra and stage with a certain grin and overall it is one of the two “motors” (the other is the stage direction) of this performance. The conductor is very well followed by the Orchestra del Maggio Musicale Fiorentino, collaborates also the Choir perfectly trained as usual by Lorenzo Fratini. 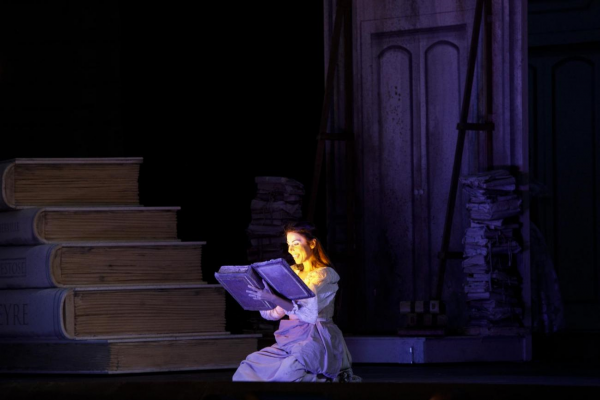 The level of the vocal cast was rather variable
. The main character in the role of Angelina was the Sicilian mezzo José Maria Lo Monaco, who sports a voice which has really little of the mezzo vocal register. In fact her “weak points” are the medium and low register, not a great business card for a mezzo. However the singer comes out at the distance, her phrasing is fairly accurate, and overall she draws a credible character even if far from the protagonistic role that would be desirable.

The young tenor Matteo Macchioni is a very famous person in Italy for his partecipation to a very popular television program, his partecipation was then followed by years of “serious” singing study. He tries to sing with a certain grace, we can admire expecially his good intentions, but the voice is small and often not well sustained, and certainly a demanding character as Don Ramiro is beyond his possibilities. 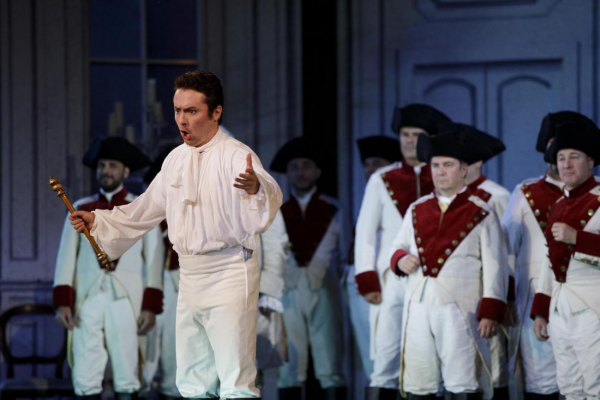 Dandini was Giorgio Caoduro, and we already mentioned his great scenic and vocal presence. At ease even in the more difficult moments, including the aria Come un’ape nei giorni d’aprile, he shows a wide beautiful baritone voice, well used to outline really with great mastery an all-round character. 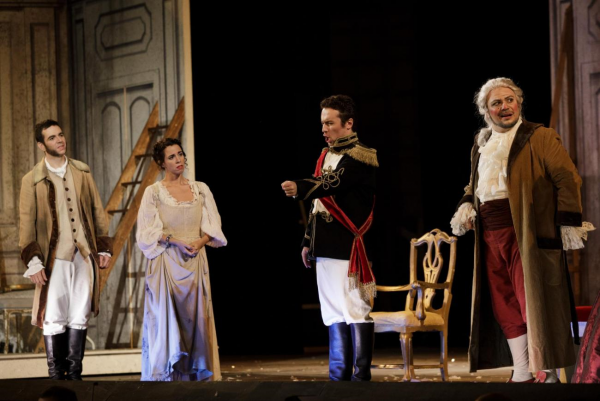 Don Magnifico was Marco Filippo Romano, one of the greatest heirs of the glorious Italian “basso buffo” tradition. His voice is wide but above all is used with an extreme intelligence never falling into gratuitous vulgarity. His mastery in the phrasing and the colors with which he extolls every word and every detail of the text is quite surprising, not to mention that he is a real histrionic presence on stage.

. Overall he appeared fairly blurred in all his role, while the aria Là del ciel nell’arcano profondo that Rossini wrote after the premiere but which is commonly performed today was better focused.

The two interpreters of the roles of the stepsisters, Francesca Longari and Ana Victoria Pitts, were normal.

Warm applause for everyone from the Florentine audience, but above all for Mr Caoduro and Mr Romano. 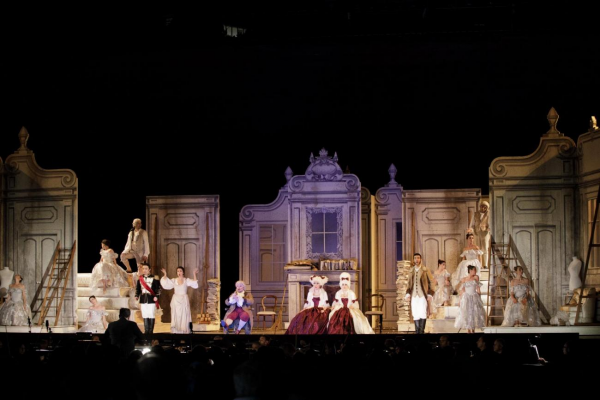 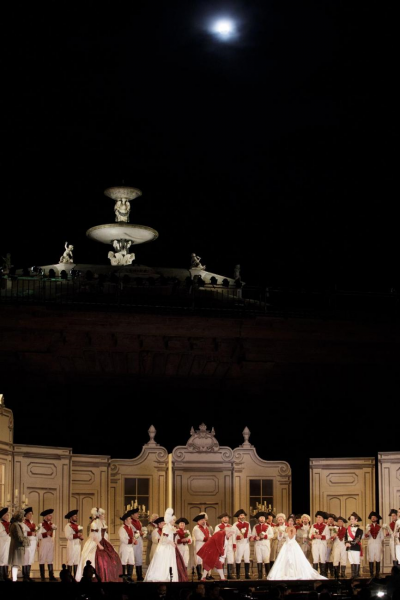 Cenerentola: Final scene (under the moon)