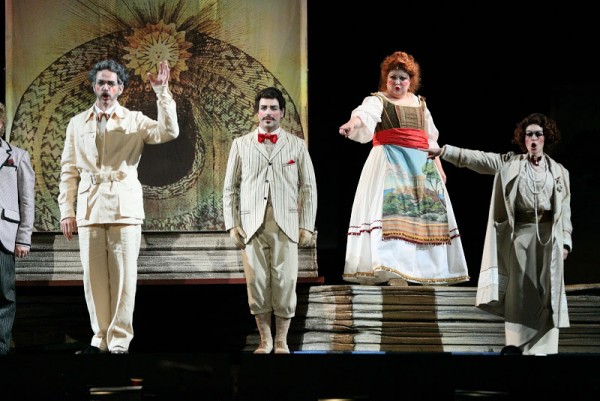 Commedia per musica by Giuseppe Palomba from G.B
. Casti

Review by Bruno Tredicine. All photos from the Festival. 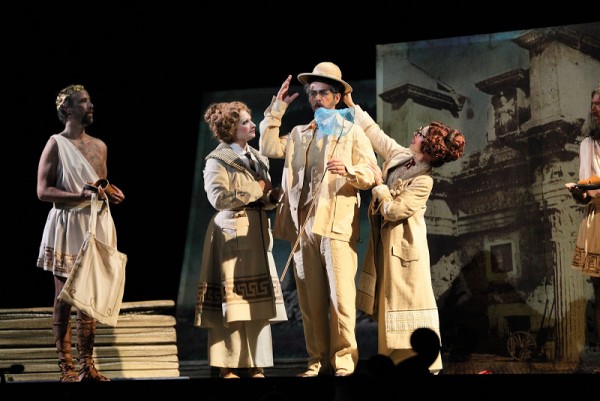 MARTINA FRANCA/ITALY: A Neapolitan at Csar’s Court, this could be a possible introduction to the figure of Giovanni Paisiello (1740-1816), one of the most important composers of the Neapolitan school in eighteenth century. 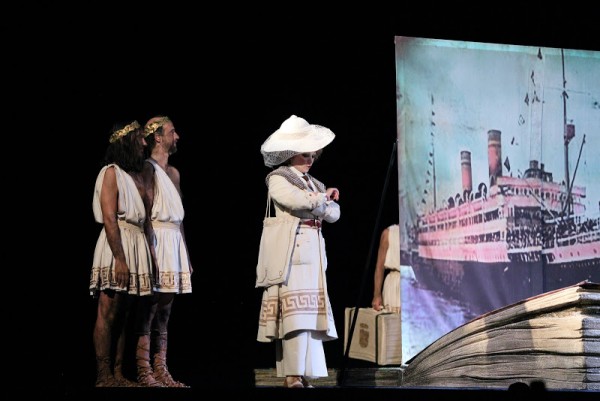 Born near Taranto (Puglia), he studied and was raised in Naples, in that time one of the most important musical centers in Europe, and his reputation was so high that in 1776 he was called to Russia by Empress Catherine II at her court. There he stayed for eight years until 1884 when partially disappointed he decided to come back to Naples.

His career went on, with more Musica seria than before, he was favourite of Napoleon Bonaparte who called him to Paris, then he came back definitely to Naples, where he died in 1816.
So, this 2016 is a celebrative year for him, marking 200 years since his death. 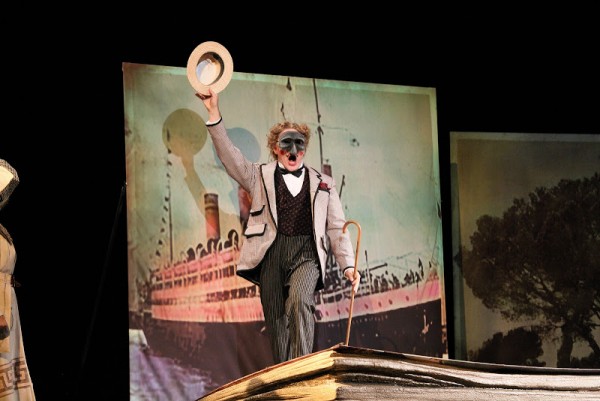 Just for having an idea of how this musician was respected we must think that Rossini’s decision to compose Il barbiere di Siviglia was considered a risk because the “real” very popular Barbiere was that of Paisiello, that had premiered more than thirty years before, at the presence of the Empress Catherine. 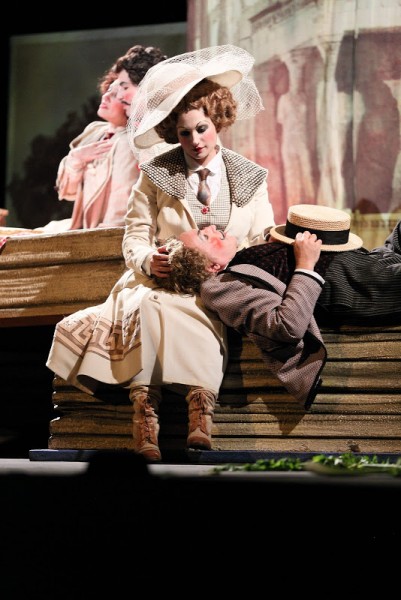 Festival of Valle d’Itria honours Giovanni Paisiello with two of his operas united under the PROJECT PAISIELLO 1816 – 2016:

that has opened this year’s Festival the 14th of july. This is the first Opera buffa that he composed after his coming back from Russia, and reprises an old subject: only a few months before also Antonio Salieri had put it in music (with a different libretto) in Burgtheater in Vienna with a libretto by G.B. Casti.

The text that Giuseppe Palomba wrote for Naples was much funnier, creating a plot so complicated and full of misunderstandings that it’s difficult to illustrate it.

He added also a couple of characters to the original story. The opera was successful at the time and was translated in german and French. 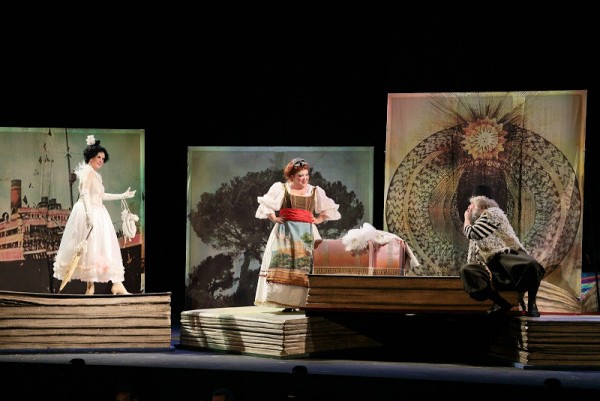 Trofonio is sort of a magician or hermit, who guards a cave with a strange power: he who enters it, changes his personality. Naturally this is the origin of a comedy of errors: all starts with the two daughters of Don Piastrone, a Neapolitan living in Athens: one of them, Eufelia,  is crazy for philosophy and is engaged with Artemidoro, a philosopher – who is actually just making believe, and loves the other sister, Dori who likes only to have fun and enjoy life with his Don Gasperone. 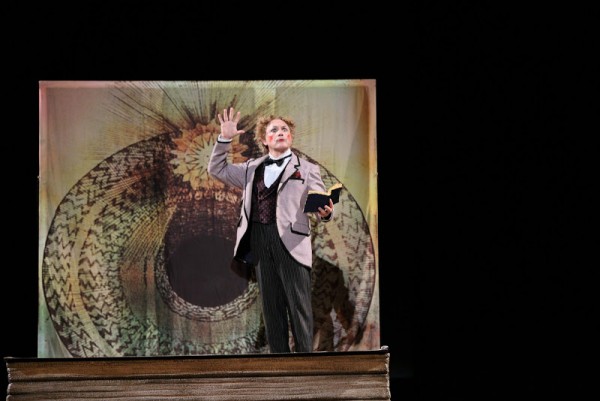 In addition two ladies coming from Naples, Madama Bartolina, a ballerina and Rubinetta, a landlady arrive looking for the two young men who have cheated them

inhibitorfor the Primary How long does cialis take to work?. 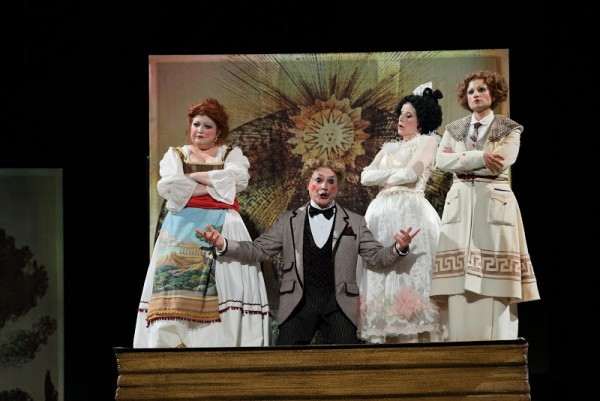 The game is laughable even if contorted, it’s almost impossibile to follow all the steps but the fun is granted thanks to an attentive stage direction by baritone and man of theatre Alfonso Antoniozzi and an amazing company of singers.

Antoniozzi takes out all the fun in the dramatic structure but never exaggerating – we stay in the field of comedy and not of farce, and it’s a wise choice: there’s already so much crazyness in the plot itself that overdo would only bring to chaos. 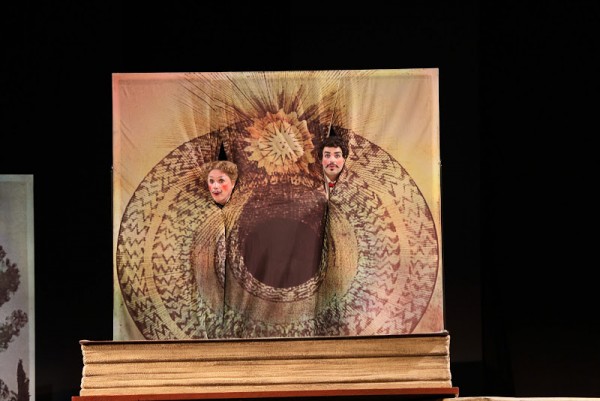 The scene by Dario Gessati is amazing: four enormous books are lying on stage, and each of them has a raised page with an illustration of classical Greece or Mediterranean Naples, the characters enter and exit from the pages themselves. Nice costumes by Gianluca Falaschi transfer the action from 1700s to the beginning of 19 century, the era when Greece was on actuality thanks to her independency and the “new” archeological discoveries. 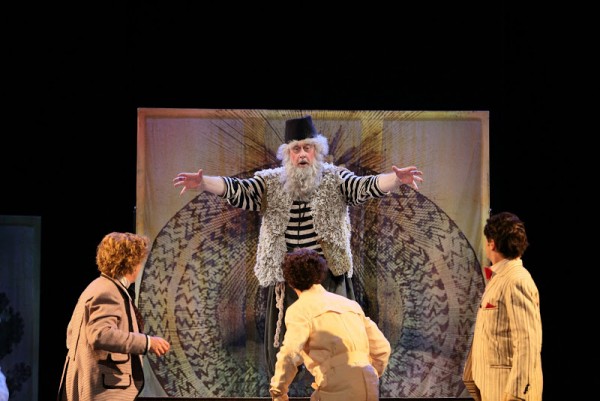 Trofonio was Roberto Scandiuzzi, very well known for his grand bass roles such as Filippo II in Don Carlo, here enjoying in giving fun depicting this deep voiced solemn wizard who’s impressive when he enters with Spirti invisibili and then turns out to be a simple man who at the end will marry the clever Madama Bartolina. Great voice and a perfect hyronic attitude are the trademark of his performance. 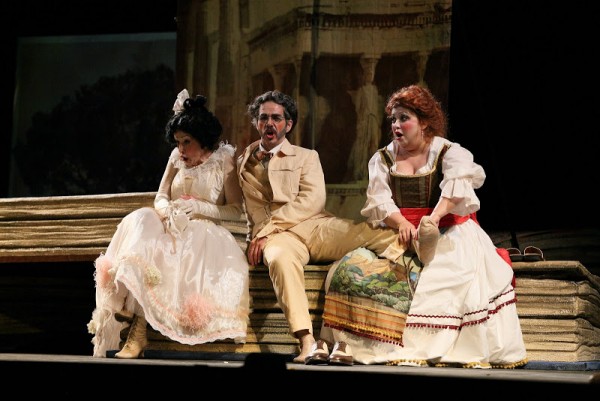 It’s never fair to reveal a woman’s age, but we may at least remember that Daniela Mazzuccato  was active and admired in the first 1970s and her career has never stopped going from Mozart to operettas. Now she admirably renders a coquettish and clever Madama Bartolina, with her fresh and homogeneous soprano, just a bit tense in the higher notes. 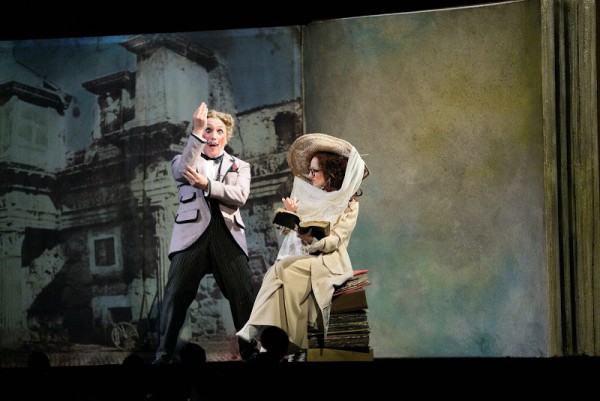 Giorgio Caoduro despite his young age is credible both scenically and musically as the father of the two girls, in a part that is maybe too small for letting him reveal his solid vocal.
Domenico Colaianni faces Don Gasperone, the most frankly funny character of the whole list, who fits him very well. Vocaly at ease also in the fast sillabato, his comicity recalls the first 1900s style, adequate to the staging. 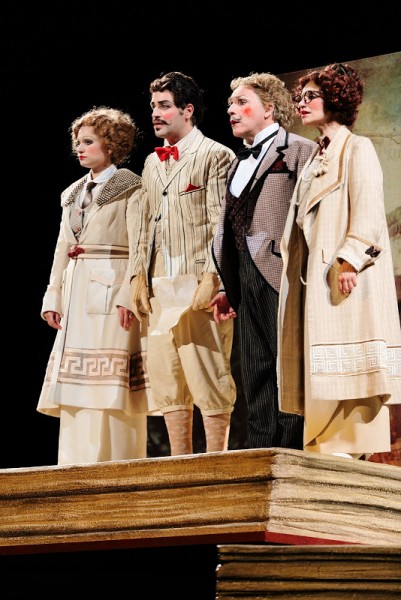 Matteo Mezzaro with his warm tenor gives voice to the romantic Artemidoro with good expressivity in his first act aria.
Funny philosopher wanna-be is Angela Nisi (Eufelia) as well as Benedetta Mazzuccato is the frivole Dori, shining in her great aria in second act, Si vuol saper chi sono?
The cast is completed happily by Caterina Di Tonno, skeptic and disincanted Rubinetta with a nice light voice.
Under Giuseppe Grazioli‘s baton, the Orchestra Internazionale d’Italia plays with light and elegant sound but unfortunately not so humoresque and full of coulours as the score requires, so that it doesn’t support  the vivid farce.

If the music don’t express the gaiety of the plot, the spirit of the play is unexpressed and a dangerous light monotony can come out.
Moreover, difficult to believe, the fortepiano accompanying the recitatives was amplified with a noisy and disturbing effect specially at the beginning only partly adjusted hereafter. A real minus.
We’ll see how it goes next November in Naples, where the opera (same production) is in program in Teatro San Carlo. 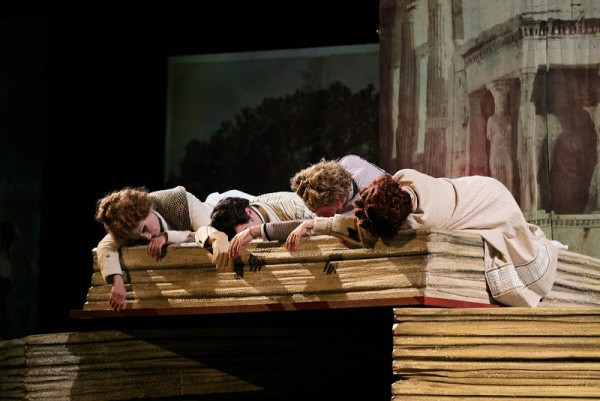 La Grotta di Trofonio will be performed in Teatro San Carlo in Napoli next November.