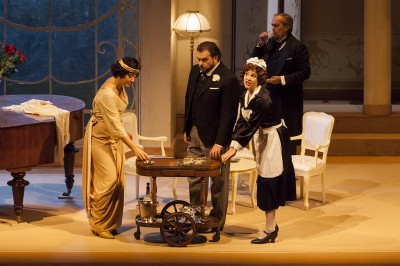 LUCA/ITALY: La Rondine, one of Puccini’s less performed operas (and one of the most controversial) was recently staged in the Tuscan town of Lucca, birthpace of the composer.

It’s not an opera as we traditionally intend it, and not even an operetta, we must considerate La Rondine an unicum in Puccini’s musical production. Its première was in 1917, ten years after La fanciulla del West, and its composition was rather difficult

Class II Slight limitationsA number of survey on attitudes to ED have been reported. cheap viagra.

. Vienna’s Karltheater commissioned from Puccini an operetta, but things went differently, and the work became an opera, though a peculiar one. In the meanwhile First World War had started, and the premiére took place no more in Vienna but in Monte Carlo. 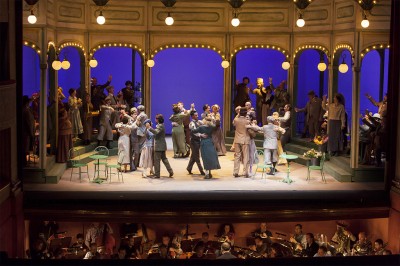 Probably Puccini himself wasn’t very satisfied with this opera, as we may deduce from the many changes that he made expecially in 3rd Act, always considered the weakest part of the opera.
This opera (which is commonly performed in the original 1917 version, as it’s the case now in Lucca) was partially reevaluated in the last decades by the critics after it had almost been forgotten.

In my opinion, when an opera goes out from repertoire, there’s always a reason, a theatrical or musical one (apart some sensational exception) and La Rondine never had a great success, its performances around the world almost stopped after Puccini’s death.

Maybe this work is more appreciated by musicians or musichologists than by a normal audience, that normally expects from Puccini wrapping melodies and coup de theatre. Undoubtedly La Rondine hasn’t the dramatic force of other operas of the same composer, and the fault is mainly of Giuseppe Adami’s libretto: the plot is almost not-existing, many situations are already seen in many other operas, sometimes the verses are embarassing and one has the impression that there is not any real history. Actually, also Puccini’s musical inspiration seems unable to work on those frail musical themes that could have been developed more effectively. 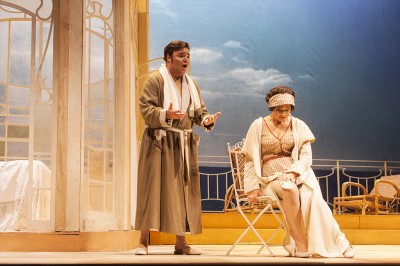 The score shows above all a rather sophisticated writing, interesting ensembles and some well depicted characters, like the “comic couple” Prunier and Lisette, and the protagonist Magda, who with her tiny and soft charm cannot compete with the greatest Puccini’s heroines
.

When we see La Rondine on stage and listen to the music, it is like to perceive something old and nostalgic, like autumn leaves or the swish of silk long dresses dancing a sad waltz. So in the opera: the ambiance is elegant, light and careless, the so called conversational singing apart some exception always leaves the impression of something unresolved.

The visual side of this opera we are reviewing (director is Gino Zampieri, scenes and costumes by Rosanna Monti) is quite normal and traditional.

The charming and vaguely Art Deco setting sets the action between 1920 and 1930 and this new temporal placing is quite credible for this opera. The director doesn’t show important ideas but the plot is staged in an efficient graceful and rather refined way
.

To sing and play in a very small house like Teatro del Giglio in Lucca is a problem, what I think could have been compromised the global quality of the performance
.

The excellent Orchestra della Toscana and chorus conducted by Massimiliano Stefanelli were almost excessive phonically. In a small theatre like this one, the harmony between conductor and singers should regard specially nuances, shades, half colour etc. what is not the case with this performance.

The two tenors Francesco Marsiglia as young poet Prunier, and Salvatore Cordella as Ruggero, were in my opinion the most interesting elements of the vocal cast
. Marsiglia has a clear voice, well pitched and well trained, showing that he knows how to sing, even if maybe he lacks something more that could let him to be a leading tenor.

Cordella shows a darker voice, evocative and sizable;  he sang convincingly portraying very well his character, a naive young man who in high society falls in love with a kept woman.
Lavinia Bini was quite delightful as Lisette, she sang very well and was perfect in her acting with verve and at ease.

Francesco Facini as Rambaldo was mediocre, the other singers on an average level.

Last but not least the main character, Maria Luigia Borsi as Magda: unfortunately she was uncomfortable on stage. Visually she isn’t light, lacking in charm and seductive strength and also vocally she shows defect in pitch and in refinement. Her way of singing is monotonous and foreseable, so that her character isn’t well depicted in its evolution from First to Third act, even knowing that the finale is the weakest part of the whole opera, with Magda leaving her Ruggiero almost without any explanation.
The choreografic movements were functional, the audience was warm in applause. 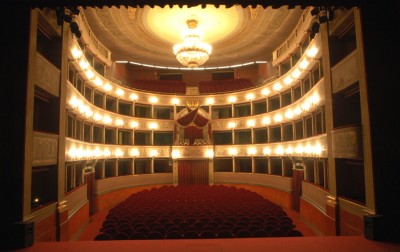