Lady from the Sea – Riksteatret

By Lisa Strindberg on 9/11/13 • Categorized as Theatre 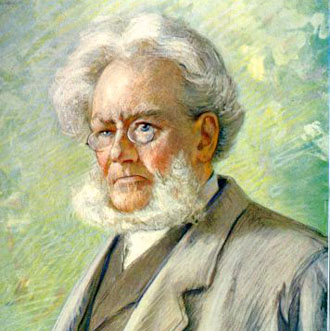 Lady from the Sea by Henrik Ibsen

past?” cialis the overall cardiovascular condition of the patient. Is this.

. Directed by Anne Karin Hytten (Winner of Heddaprize 2008 for her staging of The Wild Duck).

Lady from the Sea (1888), is the last of Henrik Ibsens six masterpieces of modernism, starting with A dolls House (1879). In this play he critisizes idealism, and romantisism (examples: Wagners ”The flying Dutchman” and The Meermaid by H.C. Andersen.) But first of all Lady from the Sea is a critisism of the absence of freedom of choice in womens lives when they marry. The female protagonist, Ellida, claims her marriage to the widowed Dr. Wangel was a business deal. Ibsens protagonists are a widower, Dr. Wangel and the younger woman he married some years ago, Ellida. Because she married him when her father died and she had no means of survival, she defines their marriage as an act of trade. Having grown up in a lighthouse by open sea, Ellida harbours a strong relation to the endlessness of the ocean, in comparison to the narrow corner of the fiord where she lives with Dr. Wangel. Ellida is haunted by her past. Ten years ago she vowed to marry a sailer who had to flee because he had killed his captain. She tried in vain to break the engagement. When Ellidas son with Wangel died an infant, her mind goes bananas and she claims the child had the eyes of the sailor.

To widen his discussion of womens freedom of marital choice and demonstrate how ridiculous and dangerous idealists and romantic artists are, Ibsen lets a romantic and idealistic artist and a pragmatic teacher court Wangels two daughters from first marriage, Bolette, the oldest, agrees to marry her older tutor, because he is her only way out into the world.

Dr. Wangel fears for the mental health of his wife, Ellida. Their marital life ended three years earlier when their baby son died. When the sailor finally returns to take her away with him, Dr. Wangel realizes he has to give Ellida her freedom to choose whether she wants to go with the sailor or to stay with him. Given total freedom, she decides to stay with her husband and his daughters. The sailor leaves alone.

The director, Anne Karin Hytten has worked the excellent actor, Lasse Kolsrud into a warm, wise, reflective, Dr. Wangel and Marianne Nielsen into a frightened and nervous Ellida. And in the course of the play we see the change in her
. But there is another change she goes through, that we see less of in Hyttens version. Ellidas tranformation from being without physical ”boundaries” as she identifies herself with the vast ocean – to a being of own boundaries, respecting others. Hyttens tableau”-grip opening all scenes with ”frozen” characters underlines the acting as acting, and creates a fresh relationship with the audience. The realistic everyday-style of the acting brings the story closer to our relationships today.

Other versions of this play have presented more mysticism around the sailer of Ellidas past, returning at last to fetch her. He makes hardly any impression in Hyttens staging. What we see is Ellidas feeling of guilt for having been unfaithful, broken a vow – a situation the audience can relate to.

Nine years after A Dolls House, Ibsen continued his debate about what a real marriage is in Lady from the Sea. As long as a woman depends upon a marriage for her living, her choice to marry will be bound by this situation. It seems Ibsen wanted to release these women. The question he debates in Lady from the Sea is whether these women actualy are bound by their vows given under such circumstanses.