FIRENZE/ITALY: The first of the Maggio Musicale Fiorentino summer performances was hosted in the beautiful environment of the splendidPalazzo Pitti Courtyard is Elisir d’amore by Gaetano Donizetti, a really delicious opera that we listen always pleasantly.

Globally it could appear as a typically “summer performance” and almost if the expression can be admitted “catch-tourists”, even though the audience last June 22nd was really scarce.

On the contrary we have positive news about the voices, above all Laura Giordano, a young soprano who has been for some years now gracing the stages with great success. She puts on display a beautiful and important voice, soaring and well set, well used, even if its volume is probably not great although difficult to judge in an outdoor performance, a nice vocal line, very interesting stage presence, outlining a surely over the top Adina (all the characters are over the top following the questionable approach of the stage director Pier Francesco Maestrini) but very well sung and focused in the fundamental features of her character, including the pathetic side.

Juan Francisco Gatell with his pleasant voice was a little uneven Nemorino, he began in first act with vocal problems poor melodic expansion and uncertainties that were later resolved until he became convincing and expressive. His interesting nice voice is used rather well, although the idea that Mr Gatell on next September will be Idreno in Semiramide in Florence worries us a little. Of course to see Nemorino in a chicken suit almost all the evening, or subjected to two almost total striptease is not that great to see, but it’s not his fault.

Marco Filippo Romano as Dulcamara shows off his trump card as an actor and unleashed character following director’s will. Undoubtedly he sings with a certain vocal accuracy even if sometimes with some forcing but is compelled by the farcical setting excesses.

Biagio Pizzuti creates his character Belcore in the round (even too much!), in fact Belcore is transformed in a fully determined dictatorial and caricatural miliitar, warmongering cocky and really too much over the top.

Arianna Donadelli was an average Giannetta in hot pants. 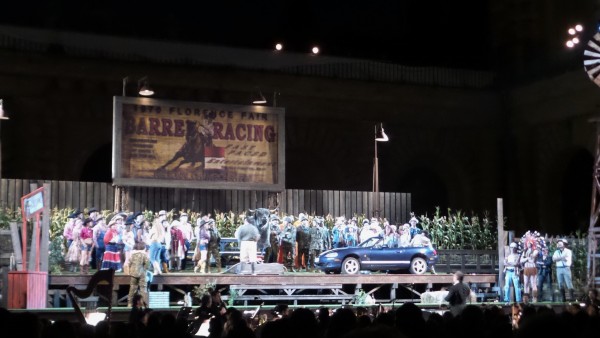 Not so good notes come from Alessandro D’Agostini‘s conducting, with even too much frequent lacks of coordination among orchestra and stage and even too much fastpace. The conductor allows some small changes to the score to meet the director’s will, however we must recognize to Mr D’Agostini a sort of rough effectiveness in leading musically to the end the performance. The Orchestra del Maggio Musicale Fiorentino was very good, the Chorus seemed a little distracted just feeling holiday athmosphere.

Now let us speak about the stage direction which, as is customary nowadays, has to stand  out at all cost, although perhaps the real revolution of each opera would be simply to follow the libretto. Or as an alternative, but it’s really difficult, to say something new, to clarify details or relationships between the characters, to reconsider the matter following first of all libretto and music not betraying its spirit, focusing situations or details on stage that somehow can clearify or enrich the characters. 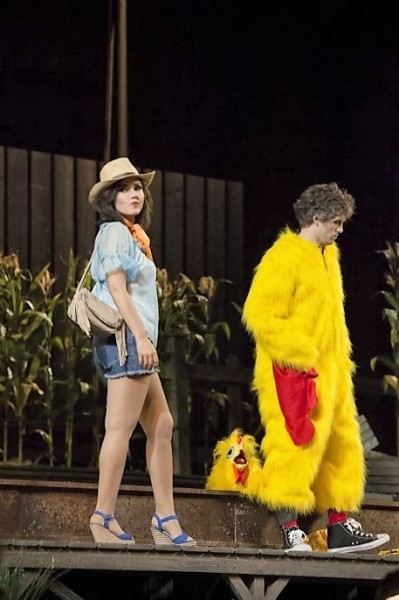 b. Hypertensionmasturbation is a sensitive issue that is often How to get viagra.

All good things on the card but in a very popular and naive opera as Elisir d’amore is very difficult to point out something new, or to highlight details of a certain importance, especially because of the lack of consistency of the simple plot. So the stage directors merely change the environment maintaining roughly unchanged the relationships between the characters. We reiterate once again that Elisir by Donizetti is not a complex opera with many implications or multifaceted as could be Tannhauser Meistersinger or Ariadne auf Naxos but only a delicious simple naive and with a bit rustic charme opera premiered in 1832.

Pier Francesco Maestrini’s staging places the action in a sort of roadhouse on the legendary Route 66 in America in the 70s-80s of last century where converges a jumble of varied humanity.

In Palazzo Pitti Courtyard the stage is a makeshift one and not very deep (in the Courtyard of course there is no pit for the orchestra, which is at the level of the audience) and unfortunately in this small space and very close to the audience the recitation of singers and choristers is clearly visible and even too much, always frantic farce and over the top.

Singers choristes and mimes are dressed with a jumble of ugly second hand clothes shop costumes (Nemorino in a hideous yellow chicken suit, then we have hot pants, military suits, Mexican ponchos, orange clothes Hari Krishna style, four mimes dressed like Village People group, then Flower children, acrobats on stage and so on…), and apart from some big laugh aroused in the public we did not notice any idea worthy of the name.

The staging of Mr Maestrini lacks in grace, a very important note for a work charcterized by a subtle charm and delicate internal balances.

Certainly a trivial setting changing (and we saw this opera really in every possible way) isn’t enough to say something worthwhile. Donizetti’s music is very delicate and should be treated with more grace and lighter hand.