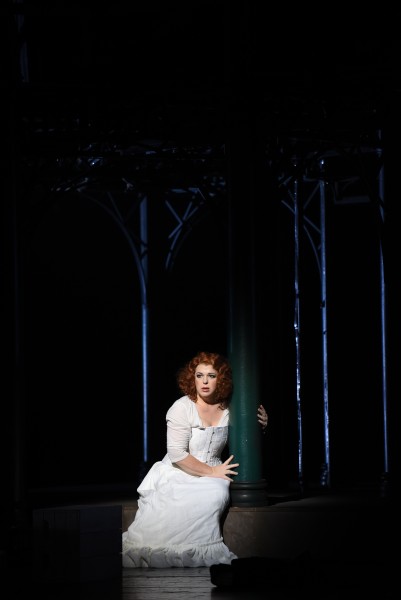 DRESDEN/GERMANY: Hector Berlioz and the Troyens in Dresden’s Semperoper seems to be the fulfillment of two stories of the 19th century
. – Les Troyens Conducted by John Fiore.

In February 1843 the French composer travelled to Dresden for the first time and stayed for around two weeks – nomen est omen- in the “Hôtel de France”, a nice baroque palace from 1680, destroyed in 1945. “Now let’s talk about Dresden: I was engaged there for two concerts, and I was going to find there choir, orchestra, music of harmony, and moreover a famous tenor since my entry in Germany, I had not yet seen reunited of such richnesses.” Berlioz writes in his memories.

Indeed, here he enjoyed the start of Wagner’s career as Hofkapellmeister in Dresden with the recently premiered “Rienzi” and later the “Flying Dutchman” in the First Royal Theatre built by Gottfried Semper. It was already the second meeting with Wagner, after Berlioz met him in Paris in 1839 already. From April 10 to May 3rd 1854 he even spent more time in Dresden, a city he praised again in letters, performing in Semper’s theatre, which with its semicircular Façade reminded Rome’s Colosseum
. This theatre burned in 1869 and was replaced by Gottfried Semper’s actual Opera House in 1876.

This theatre lead to success thee ideas: the perfect theatre as result of the talks between Wagner and Semper and their idea for a Festspielhaus in Munich, the grand tradition of the baroque theatres in combination with a bourgeois theatre with two entrances for nobility and citizens with equal rights and finally the idea of a theatre as temple of arts. Dedicated to the god Dionysus, the new Royal Theatre, after its re-opening in 1985 as “Semperoper”, is the expression of the idea that the philosophy and theatre of antique Greece are able to teach deeply the spectators: by internalizing the lessons of the tragedies humans can raise their moral, as it is described in Mozart’s Magic Flute. “If virtue and righteousness pave the Great Path with honor, then earth will be a paradise and mortals resemble gods.”

In the Semperoper, the public walks in the Foyer with view down to the street level of daily life and view up to the portraits of the gods. In the vestibules, the main painting of the ceiling shows Eros making peace between the decendens of Peleus (kings of Aegina and Thessalia) and Labdakos (kings of Mycena) families. At the bottom the Pelean descendent Achilles is shown in reconciliation with Héctor whom he had killed in the Trojan war.

Another wall painting shows the scene of the suicide of the Trojan women referring Seneca’s drama.

Steier and the world

To create a synthesis of Ancient Greek mythology, 19th century reception and our time’s experience was the obvious aim of Lydia Steier who produced the Grand Opera “Les Troyens” in the Semperoper. The scenery, creared by Stefan Heyne, was highly inspired by the Semperoper. The original plans by Semper hided an iron construction which sometimes reminded the Eiffel or Babylonian tower, sometimes the structure of Dresden Zwinger Palace.

The Trojan horse was a replica of the equestrian statue of King John of Saxony in front of the Semperoper, and the Trojans themselves were set in beautiful costumes of Dresden’s society of the 19th century, designed by Gianluca Falaschi. The idea was to transpose the whole setting into the 19th century, but naturally this didn’t went logically along with the text. The Trojans as Dresdener’s were in company by catholic priests (Dresden was predominantly protestant)
. The original Carthagians (the Originals lived in actual Tunis) became Slavics probably from the Balkans, with Orthodox priests, fighting against Turks.

Lydia Steier did not hesitate to show the cruel history from mass suicide of the female Trojans to the IS-like execution of invading Nubians with corporal fledging afterwards. 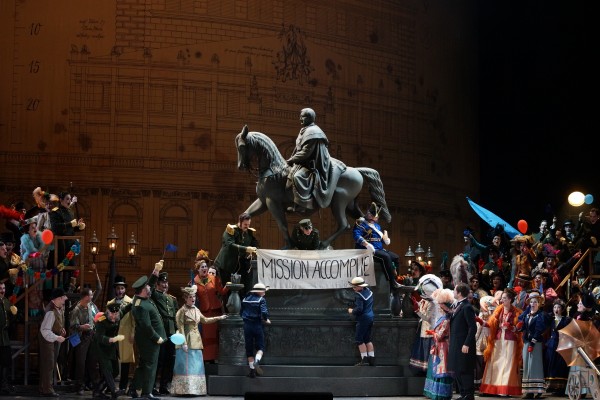 The five hours opera (including about 45 minutes of interval) set this dramatic picture also musically. The US originated John Fiore who is an often and well seen guest conductor in Dresden put together the huge mosaic of heroic triumphal marches, fierce battle scenes with incidental music backstage or side stage, moving choirs singing from different sides as well and few lyrical moments. Indeed, even if the two real protagonists were women, who also felt in love, love was obviously not in the air, and almost not musically

• Mild stable anginapatients How to get viagra. 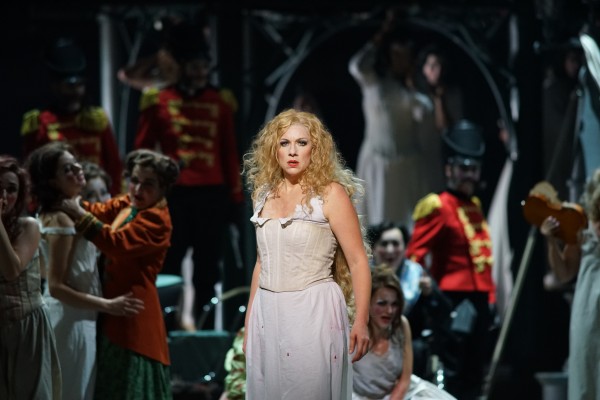 In the first part (Act 1-2) Jennifer Holloway gave a convincing dramatic Cassandre, who always insisted in front of the threatening danger. Nevertheless she could not even convince her lover Chorèbe (Christoph Pohl with pleasant voice) to flee. In the second part (Act 3-5), the protagonist was Didon, or better Christa Mayer as Didon
. With her in the height silver shining soprano she was also able to explore the most profound feelings from superficial happiness via pure love and deep depression to harsh hatred and dissolving herself.

Bryan Register got great applauses for his lyric and dramatic interpretation of Énée showing even in his shining voice the huge variety of character between being rough fighter, sweet lover, doubtful man and fanatic fulfiller of a mission.

Also the minor roles were great like Agnieszka Rehlis as cupper voiced kind and malicious Anna, Joel Prieto with his romantic soft tenor as Iopas, Evan Hughes as a introverted Narbal, or Angela Schlabinger as childish Andromaque.

Talking about protagonists, we should add the State opera choir, the Extra choir and the children’s choir of Dresden State Opera and last but not least the excellent Staatskapelle Dresden with its deep sonority and clashing fortissimos. 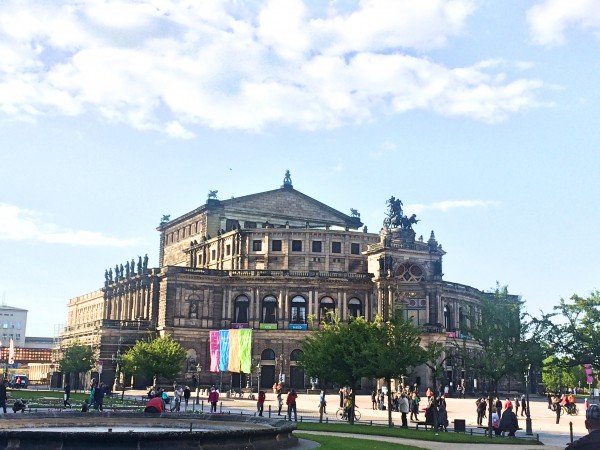 Please enjoy our review from Les Troyens in Strassburg: http://www.kulturkompasset.com/2017/04/19/outstanding-les-troyens-in-strasbourg/