Magic Flute by Mozart in Vietnam

Transposition are soon launching their biggest project in Vietnam to date – a full stage production of The Magic Flute by Mozart, Geir Johnson tells. This event is also rather historic, as it is the first time that the opera company in Ho Chi Minh City actually produces a whole opera by themselves.
By Henning Høholt, Photos: Trinh LAI. 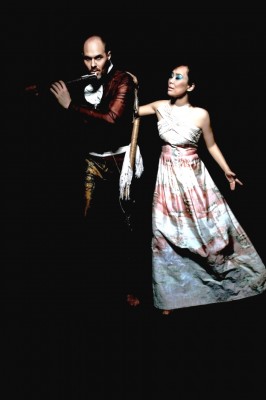 Magnus Staveland as Tamino together with Cho Hae Ryong as Pamina, in Mozarts The Magic Flute in Ho Chi Minh City in Vietnam 8th and 9th
. November
. Foto: Trinh LAI.

HO CHI MINH CITY/VIETNAM:  They will be presenting a new stage production directed by the German director David Hermann, with dialogues all in Vietnamese, while the sung parts are done in English.

The costumes are made by Vietnamese clothes designer Quynh (www.quynhparis.com), and set design by D????ng H???ng H???nh
Our interpretation of this classic work is based on a cooperation with Norwegian professor Kjell Skyllstad, who has made a new interpretation of Mozart’s link with the Asian influences in Europe at the end of the 18th century, thus showing how much of this work is actually connected to the Orientalism of the time.
The soloists, the HBSO orchestra and chorus are conducted by Magnus Loddgard, a young Norwegian conductor, whereas the orchestra has been reinforced by musicians from TrondheimSolistene (strings) and National Defense Wind Bands (winds and brass sections).
In this production we also make use of the ballet company of the HBSO. 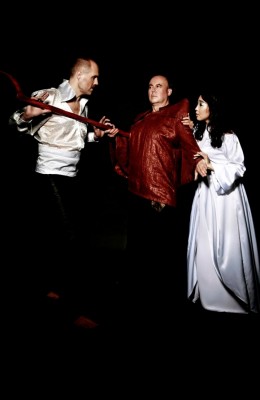 The soloists are both Vietnamese and Norwegian:

The Queen of the Night: Dao To Loan

The program book will be available for pdf download in a few days’ time at our website www.transposition.no
Performances, on Nov 8 and 9. 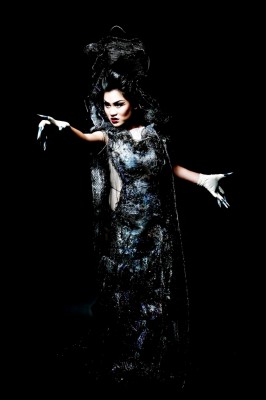 The Queen of the Night: Dao To Loan. Foto: Trinh LAI.

THE MAGIC FLUTE IN ASIA

«Mozart embodies the innocence, inventiveness and promise of the birth of a new order of the ages». (Don Campbell: The Mozart Effect N.Y.2001)

Right at the start of The Magic Flute we find Tamino, an Asian nobleman, pursued by a dragon and seeking refuge in a far off country, being handed a flute with a promise: «Take this flute. With this you may transform the passions of men».

In the score of the opera we find Tamino being referred to as a Javonese prince. We know that Mozart entertained contacts with representatives of the Dutch East Asia Company in his homeland Austria. Recognizing that Tamino is a common name in Japan today, researchers tend to think that Mozart refers to Japan. Through the Jesuit drama of the 18th century, Mozart and Schikaneder, the librettist and opera producer, had likely been exposed to Japanese culture. 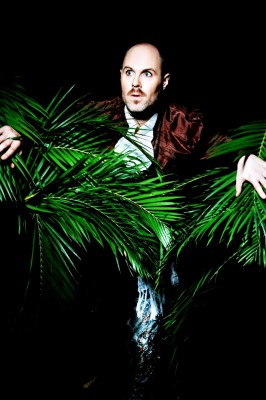 It is interesting to note that Mozart in Vienna belonged to the Masonic lodge of The Asian Brothers.

It is also interesting to note that the name Pamina is first mentioned as a Japanese flower in Europe by the Swedish botanical explorer Carl Peter Thunberg, who had himself travelled to Japan, Java and Ceylon to work for the Dutch settlements there in the 1770’s. It seems quite likely that Mozart could have picked up the name from Thunberg’s book “Flora Japonica” which was published in 1784, through his contacts in the Dutch East Asia Company.

So let us for a moment continue to let the score kindle our imagination. Tamino, like the educated nobility in Europe at that time, must have been a musician in his homeland, and like Friedrich II of Prussia he must have been a flute player, since he had no difficulty in playing the traverse flute handed to him
. So to stretch our fantasy even further, we could imagine Tamino in the opening scenes fleeing from the bitter conflicts developing between different guilds of Shakuhachi players in Japan of the outgoing 18th century. As we now know, the Shakuhachi is just one example of flutes being used for meditation and healing up to this day, not only in Japan

It seems significant that opera from its beginnings in Italy of the early 17th century, leading up to the times of Mozart, puts a primary focus on the transformative functions of music. In his opera Orfeo, the composer Monteverdi, living in the fertile urban climate of exchanges between western and eastern culture that inspired the arts and architecture of Venice, unfolds the grandeur of the early Baroque style in a eulogy (the Prologue) – praising the transformative power of music that later is unfolded in the following action.

In The Magic Flute, art then, is presented as a motivating force for transformation. In his first aria, Tamino is presented with the portrait that motivates him in his life’s search for enlightenment and personal fulfillment. In the space of a few bars, Mozart in this aria displays the intimate connection of his music to the message of his opera, mirroring the processual character of the human quest for enlightenment and the way music comes into play each step of the way. 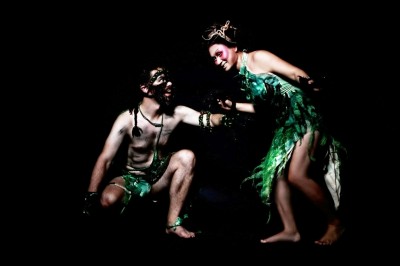 Could we then for a moment imagine Schikaneder and Mozart recognizing and honoring the Asian traditions of art, as well as music serving a common goal of promoting and attaining human enlightenment? Even before Mozart, the Baroque opera was full of oriental heroes.  In times that were beginning to question the claims of Christianity to be the only ethical guide, a search began in literature and opera for another human reality not soiled by the misdeeds of old Europe.

Thus, in line with the positive portrayals of the oriental ruler like the Sultan in Mozart’s opera Zaide who accepts the marriage between the Christian Gometz and the Muslim Zaide, and Selim Pasha of The Abduction from the Serail, Sarastro in The Magic Flute preaches the gospel of mercy and forgiveness. Right after the outburst of hatred by the Queen of Night in her famous Neapolitan revenge aria, Sarastro responds, using the musical language of Gluck, stating that in his hallowed halls, revenge is unknown. Mozart must in fact have been a great admirer of Sarastro (Zoroaster) and his teachings, as he (Mozart) reportedly during the Viennese Fasching (Carnival) could be seen dressed like him in Persian garb, distributing leaflets containing tenets of Persian wisdom.

Furthermore, if we compare the function and message of Mozart’s opera with the rituals that can be seen as having contributed to the development of performing arts in Asia, some additional interesting parallels come to light. A Southeast Asian theater audience will easily recognize the story of the utopian pair of bird people – Kinnari and Kinnara (India, Burma and Cambodia) or the Manora (Thailand) – as being possible models for the Papageno/Papagena story.

In The Magic Flute we also meet another pair – Tamino and his Pamina – surviving the ordeals of fire and floods through the protective powers of music, thus reminding us of an origin of music in nature rituals, aimed at maintaining ecological balance and preventing disasters. This happens after Papageno playing the oriental bells, the sistrum, manages to solve a Muslim hostage drama. The hostage taker, Monostatos and his men, find themselves captivated by the music, and spontaneously release their hostages.

So here we have arrived at three stages in personal and social development where music, bridging time and space, has a role to play: Transformation, Forgiveness and Peace
. In fact, these were the key areas brought out at the Vienna celebrations in 2006 at the 250th anniversary of Mozart’s birth. The specially invited American opera director Peter Sellars pointed out these principles as prime elements fueling Mozart’s creativity in 1791, the last year of his life, and represented by The Magic Flute (Transformation), La Clemenza di Tito (Forgiveness) and Requiem (Peace). Together they constitute Mozart’s testament to the world. And The Magic Flute combines them all with a message for all times and peoples.

Twelve music institutions in Norway and Vietnam are partners in the Transposition programme for development and cooperation. Since 2007, Transposition has transferred knowledge between the partner institutions through concerts, workshops, recidencies for students and performers, musical education, development of archives and libraries, documentation and instrument maintenance.

An important goal for Transposition is to promote excellence and professionalism in the partner institutions through the aforementioned activities. Other important aims are to build knowledge, both musical, technical and administrative.

The programme is rooted in the European tradition of classical music, and from 2010, ethnomusical perspectives are included.

Transposition is funded by the Ministry of Foreign Affairs

. The administration of Transposition reports to the director and board of MIC Music Information Centre Norway and the Royal Norwegian Embassy in Hanoi.