Magic Flute in Berlin with Tom Erik Lie as Papageno .

Magic Flute in Berlin with

BERLIN/GERMANY: Mozart’s Magic flute is one of the most beloved operas in the world. Everybody know it by heart, specially in Germany So Berlin’s Komische Oper Intendant Barry Kosky wasn’t eager to put it on stage unless he found a new attractive way to do it, something that is even easier to understand if we think that this theatre, the smallest among the three Berlin’s operas, is famous for its often outrageous stagings.

Then, australian born Kosky saw a performance of british theatre company “1927” (the name comes form the year when the first spoken film was shot, “The jazz singer”), specialized in mixing real artists, animations and live music, and immediately thought that he had found who could take the task of the new Komische Oper’s Zauberflöte. “1927” are man and wife Bill Barritt and Suzanne Andrade
. While Barritt is the design artist for this Magic flute, Andrade has been stage director together with Barry Kosky.

And here it is: this staging of Mozart’s masterwork had its prèmiere in November 2012, and since then there have been more than 40 performances, many sold-outs, sometimes double-bills, and the setting has been exported also in America, first of all in Los Angeles Opera, where an extra-date had to be scheduled also before the opening night.

Why all this excitement around this production? The winning idea and the core of the fun is the mixing of real singers with animated projections. Actually the artists play in front of a white screen and they are literally surrounded by magic images, moving backdrop and fantastic characters they must interact with, with perfect sincrony, so that they seem to be actually part of the movie. Just for instance: Pamina and Papageno pretend to run along the stage but they are actually not going further of a single centimetre: the moving images simulates their jumping on the roofs.

The costumes and animation style is around the 1920s, and so is the general design and culture athmosphere.

There are dozens of examples, the fantasy of the directors creates colourful and imaginative sets always new for every scene, sometimes like a dream, sometimes nightmarish.

When Tamino’s Magic Flute sounds, a graceful dragonfly appears on stage spreading notes all around, while from Papageno music-box, nice small girls are released and dance in the air.

Only a couple of ideas are not so perfect: to have the Speaker of the temple not appearing on stage for his important recitative with Tamino (he’s replaced by an enormous head, symbol of human reason, and his voice comes from background), and to show the Queen of the night as a horrible spider already from her entrance with the first aria, when she’s supposed to look like a desperate mother, depriving the opera’s dramaturgy of an essential coup de theatre.

But there are many very good and suggestive moments: for instance when Tamino and the two Armoured men go down with a sort of elevator through mysterious depths to the land of the proofs, or the speedy flash back of all the various scenes towards the end of the work- In a general 1920s athmosphere (set by the general design and the costumes by Esther Bialas) there are many cinematic references: Papageno is dressed as sort of Buster Keaton, always in company of a funny and puzzling black cat, Pamina looks like Louise Brooks and Monostatos is not less than Nosferatu. Moreover, the pink elephants that dance all around within Papageno’s drunk scene, remind to Walt Disney’s Dumbo.

In the whole the staging works well as a theatre experience. At the beginning, one may think that the fun is all in itself and in the original idea, but going on with the story, when the comic give space to the mistery and reflection, we find at least part of the inner sense of this masterwork.

What is really lacking are the recitatives, that here are staged as a silent movie: what the characters say or think is projected on the space around them in capital letters, while on the piano, in perfect old time cinema style, we hear piano music but obviously a Mozart’s one, piano Fantasy K 475 and K397. 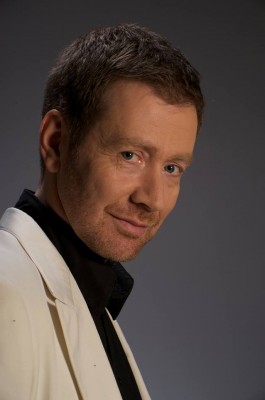 Papageno had nothing of the traditional bird-catcher: as said he was sort of a Buster Keaton, and Tom Erik Lie has sung well the part with comunicativity and a warm timbre that suited well to this beloved character.

Tamino was Adrian Stooper, a good lyrical voice, clear and with a fluid emission.

Brigitte Geller has been a good Pamina: Her soprano is not specially charming, but she can sing, believable in the various moments of the opera and specially good in difficult Ach, ich fühl’s, her second act aria, that she holds in delicate balance expressing well the deep grief tied to this divine music.

As said, the Speaker of the temple doesn’t appear on stage. The fact that his interpreter is the same singer of Sarastro, Alexey Antonov, is clear because of the nasal sound of his voice, that unfortunately wasn’t noticeable for any other quality, not apt for such a charismatic role.

Papageno had nothing of the traditional bird-catcher: as said he was sort of a Buster  Keaton, and Tom Erik Lie has sung well the part with comunicativity and a warm timbre that suited well to this beloved character.

Queen of the night, one of the most awaited and diva-style role of the whole opera repertoire, was Julia Bauer. The german soprano has a subtle voice, but she got off well with the coloratura in her first aria, where she sounded less convincing in the first pathetic part. In the famous The hölle Rache she could bring off more temperament in the terrible lines she must sing, but she was not perfectly in tune in the fast staccati.

Stephan Boving has been a good, definitely not black Monostato, set in some of the most impressive animations.

The Three Dames are dressed as comic fascinating women from the 1920s, they send small loving heart that fill the space to the fainted Tamino laying in the snake’s stomach (cartoon prodigy) Moreover they are also provided with names, projected around them at the end of their first act trio, just for the record they are Frau Tratsch, Frau Klatsch and Frau Schwatz. The singers Mirka Wagner, Theresa Kronthaler and Caren van Oijen are good when they sing together, more than in their short solo lines.

Nice and sympathetic, Julia Giebel was a light-voice Papagena.

Well sung the Two Armour Men by Christoph Späth and Bogdan Talos, as well as precise and at ease on stage, the Three boys sung as usual by soloist of the Tölzer Knabenchor.

. The Ensemble has showed good disposition but already from the Ouverture it was clear how the general level was unsatisfactory, lacking balance among the different section and with a flat sound.

The Chorus under David Cavelius was well prepared, expressive and with a beautiful uniform sound.

The audience that filled the house showed much fun, often laughing (sometimes not in the right moment) and at the end greeted all the artists with warm applause.

Queen of the Night: Julia Bauer