By Henning Høholt on 9/17/15 • Categorized as Literature,Movies

OSLO/NORWAY: The first Nordic disaster movie, The Wave by Norwegian director Roar Uthaug, is sold to Magnolia Pictures. The exhilarating disaster thriller will have its international premiere tonight at Toronto International Film Festival, and is Norway’s official entry for the Best Foreign Language Academy Award this year. 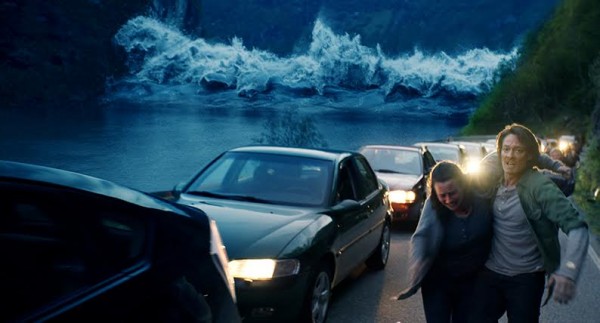 The Wave – Bølgen – Oscar nominated 2015. – has been sold for American distribution.

Norwegian director Roar Uthaug’s The Wave, which 16 September celebrated its international premiere at the Toronto International Film Festival, has been sold for American distribution. The deal was negotiated by Magnolia SVP of Acquisitions Dori Begley with Susan Wendt of TrustNordisk.

Based on the 7 April 1934 real-life tsunami in Norway’s Tafjord, which left 40 people dead, the first Nordic disaster movie opened last month’s Norwegian International Film Festival in Haugesund (16 August) and was domestically released on 28 August to register 136,293 admissions in the opening weekend, the third best result ever for a Norwegian film.

In John Kåre Raake and Harald Rosenløw Eeg’s original screenplay history is about to repeat itself at the Geiranger Fjord, where a geologist realises there are 10 minutes till the inferno hits. Kristoffer Joner, Ane Dahl Torp, Jonas Hoff Oftebro and  Fritjof Såheim star in Uthaug’s fourth feature, which was produced by Martin Sundland and Are Heidenstrøm, for Fantefilm Fiksjon

Three weeks after its national opening The Wave is this year’s best-performing Norwegian feature, having reached 523,847 admissions as No 1 on the charts, followed by two US pictures, Kyle Balda and Pierre Coffin’s Minions (438,866) and James Wan’s Fast & Furious 7 (422,974).

The film, which is Norway’s official submission for the Oscar nomination as Best Foreign-Language Feature, has also been selected for the Fantastic Fest in Austin, Texas (24 September-1 October), and the BFI London International Film Festival (7-18 October).

“The Wave is an incredibly accomplished action spectacular with phenomenal special effects,” said Magnolia President Eamonn Bowles. “But it’s also beautiful filmmaking with multi-dimensional characters and terrific acting. We’re excited that Norway has chosen the film to represent their country at the Oscars this year.”

Producers Martin Sundland and Are Heidenstrøm of Fantefilm are thrilled about all the positive feedback they have received, and are confident that The Wave is in the best of hands for the US launch with Magnolia.

Magnolia Picture, who has previously released several Norwegian films like Headhunter, Trollhunters, Ragnarok, Pioneer and Happy Happy, is eyeing a US release in early 2016
.