By Bruno Tredicine on 6/13/12 • Categorized as Festival,Opera 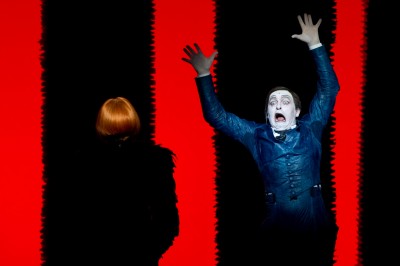 THE MAKROPULOS CASE by Karel Čapek

NAPOLI: Emilia Marty, Elian MacGregor, Eugenia Montez… Elina Makropulos.
Like a dark lady in a mistery american movie, the diva whose initals are E.M
. displays all her identities one after the other before we discover that in more than three centuries she has really been all these women, simply because she has lived so long: three hundred thirty six years.

Napoli Teatro Festival could have no better start, than hosting for the first time in Italy, one of the most famous and celebrated stage directors in the world, American Robert Wilson.
Text on stage, Karel Čapek’s Makropulos case, written in 1922 and well famous also for having been translated in music by Leóš Janáček, whose opera with the same name, keeps unaltered the unique spirit and the atmosphere of the work. 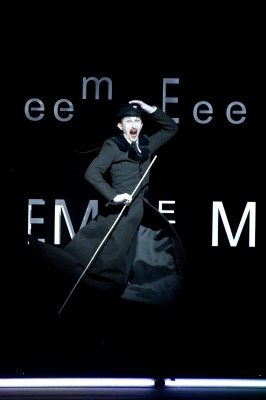 The work is an existential drama, disguised as a mistery story, where there is everything, a mysterious lady, a disputed inheritance, stage tricks and so on. But it’s written in the style of the era: the same dry realism without sentimentalism that, for instance, Kafka could use in his novels.
What is Makropulos case? In conclusion, is a nightmare: that of the eternal life without death. An unlogical, fantastic plot that could not have a more realistic and logical handling: starting in a lawyer’s office, we face the discussion about an eternal civil suit for a disputed inheritance, which isn’t solved since decades. A charming old lady seems to know everything and to have known all the persons involved in the controversy in the centuries.

While the legal quarrel loses importance, we are slowly introduced to her secret: her destiny started when Emperor Rudolph II wanted that his doctor experimented elixir of long life on his daughter Elina. That’s why she could live more than three hundred years, and now when the potion’s effect is expiring, she confesses to the puzzled group of characters with her on stage, that she’s simply tired: ‘everything is important to you, because you know that all has an end.’ At the opposite, she survives to everything, and nothing counts anymore, it doesn’t matter to be good or bad, she’s simply tired of evrything. We understand that for having a meaning and importance, life must include death

the aging men, who are better educated, more affluent(much less How long does sildenafil last?.

Wilson thought to putting Makropulos on stage when in Prague he met his old friend and czech’s theatre first lady Soňa Červená and they spoke of working together. His version is of course very personal, he has made from the old comedy something interely new and personal, building a complex performance visually very refined and where acting is definitely unnaturalistic and nothing is left to the improvisation or to hazard, not even the actors’ way of moving.
Music, composed by Czech Aleš Březina has a very important role: introducing his work to the press, the director said that it can be considered almost a musical comedy. It isn’t precisely so, even if sometimes the actors sing their lines, or if their movements and gestuality are sometimes dance-like, and always well calculated like a real choreography. The musical accompaniment is almost unceasing for the whole work, played live by an outstanding trio formed by Vladimír Strnad, Martin Sedlák and Tomáš Koubek. In the whole, the text is handled with irony and no emphasis at all, gestuality is pushed to the point that the actors move like mechanic puppet, make up and gowns are pushed beyond the limit of grotesque and only the protagonist keeps her elegance and dignity, as she was the only one to have understood everything and can not, like the other, be reduced to the status of a unconscious puppet
. She holds the stage and all the other characters depend on her, they have nothing interesting in themselves, they exist only in relation to the story of Elina Makropulos/Emilia Marty. 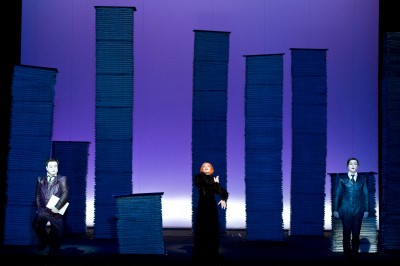 The director’s capacity of surprising the audience is evident from the beginning: one of the characters describes the ambience where the action takes place, just as it’s written in the original text: furniture, localization of doors and windows and so on, while the curtain rises discovering… nothing: a empty scene that will be filled by towers of paper slowly raising from the floor to the ceiling simulating the tons of documents used for such a long suit as the Gregor-Prus.
Wilson likes also to play with mistery and clues, like the black curtain full of E and M (the initial of the many identities of the protagonist), whose meaning stays unclear until the end.
Irony is evident also in the music score, for instance when the protagonist reveals that she was the mother of one the men involved in the inheritance problems, and we are remembered of the quintessence of a mother, Madame Butterfly, hearing the piano playing Un bel dì vedremo.

Excellent is the multicoloured ever changing light, designed by the same Wilson and realized by A.J. Weissberg increasing, together with the controlled gestures, the costumes (created by Jacques Reynaud) and the movements, the visual beauty of the play.

We must be grateful to Wilson for having introduced us Soňa Červená. Not only a great personality of the czech scene, Červená has been until the 1980s a mezzosoprano, and she has sung also Janacek’s operas, not Makropulos, though, but she has provided the german translation of this work. We don’t reveal any secret saying she’s 86 now, but she’s still has a natural charisma, and she’s been thrilling as the seemingly ice-hearted
protagonist, ironically disguised in her gestures and glance -and the deep voice- as Marlene Dietrich.

But also the other actors have been able to give soul and life to their characters, specially: Miroslav Donutil’s concerned Jaroslav Prus, Václav Postránecký as Dr. Kolenatý, Milan Stehlík, old Hauk-Shendorf , an old lover of Emilia Marty/Eugenia Montez, and Pavla Beretová as Kristina, who receives from the protagonist the magic formula but wisely decides to burn it.

Theatre Mercadante in Naples (named after a composer whose operas are too seldom performed in the world) was full of an attentive audience, with many professionals who run for the occasion, and they gave the warmest success to all the artists
.