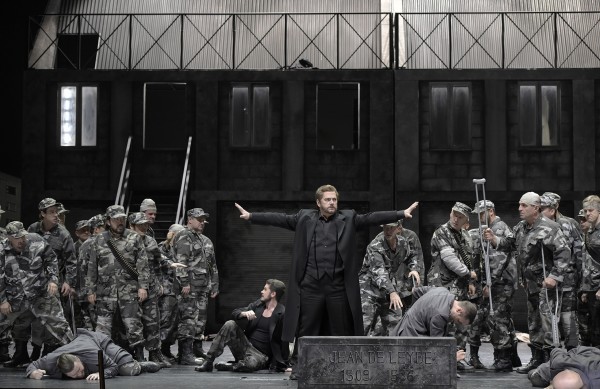 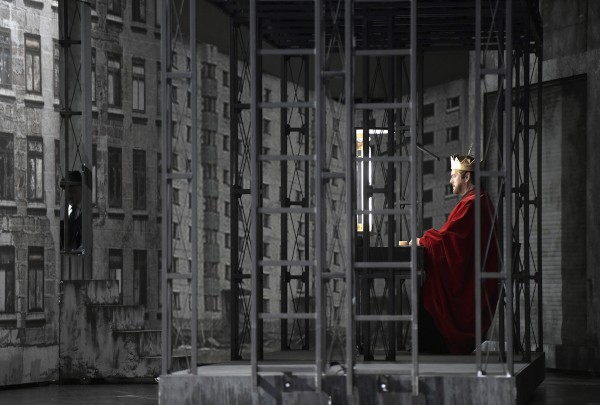 Together with the outstanding mezzo-soprano Clementine Margaine as his mother Fidés. 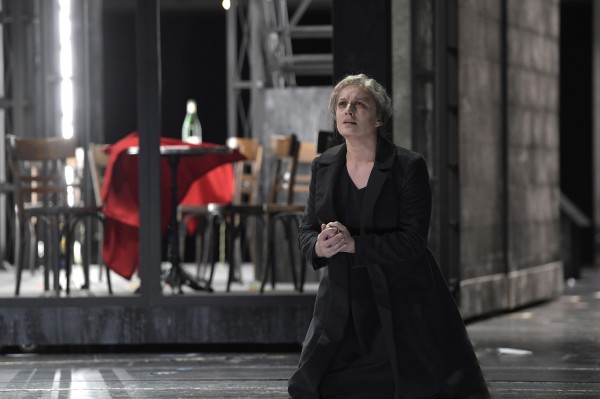 Excellent and musically conducted by Enriques Mazzola in front of the very good Deutsche Oper Orchestra and choire, everything was prepared for a new success in the wellfunctoning opera house in Bismarck Strasse in Berlin.

Time: The religious wars of the 16th century
Place: Dordrecht and Münster

Precise: Jean de Leyde (based on the historical John of Leiden), whose beloved, Berthe, is coveted by Count Oberthal, ruler of Dordrecht, is persuaded by a trio of sinister Anabaptists to proclaim himself king in Münster.

In the Deutsche Oper Version staged by Olivier Py, by religion and sexual exercised power is the front figures that meet us, specially in the opening act. Where also the protagonist Jean de Leyde, is being pushed by anabaptists to accept the position as the prophet that the world is waiting for.

He is even refusing to acknowledge his mother and pretends her to be a mad woman coming and calling him – the prophete for her son, and after a scene she admit that he is not her son, – who makes his followers believe he is a prophet. Another cruel example is the great church scene, where a number of sick mens and wimena are present in wheelchairs and one is close to die, the prophet – Jean – apparently heals them to ascend from their wheelchairs and dances. Where we see that when they leave the scene, they get discreetly paid their fees for their artistically actings, so these are people who are playing sick, to make the congregation believe that the prophet heals them. And behind this religion we do see what is going on behind the official front.

However, in the end, Jean searches his mother, repentantly asks for her forgiveness, but she does not accept his lie and demands that he move away from the “job” as a prophet, something he agrees with, and then he gets his mother’s forgiveness.

For Olivier Py  “Le Prophéte”  is a piece presenting political violence, more than about anything else. He decided to move the history closer to our days, and in this package also to use street houses, cars, guns in stead of swords, and modern costumes, which in fact works very well, and also permits Py to enclose modern behaviour.

Together with the religious part of this production we notice the sexual power. But that is not anything new, that has happend since, and before  Roman Empire and we know it from the history of Pompeii. It happens today. – Notice for example the “METOO” campagne regarding sexual pressure in the teatre, film, music world. However, it is well illustrated in this production, and will certainly help to focus on the realities of life, and also of happiness. And it still happens, also in Europe.

Olivier Py has successfully managed to update the Prophéte to our days, and are showing us the realities in the life.

The whole staff on stage, the excellent choir, the children choir, and the good ballet dancers who are performing and dancing and making the sexual acts are doing an excellent job.

In addition to the two main figures Jean and his mother Fides, we too enjoyed Berthe – very good sung by the Russian soprano Elena Tsallagova, the Australian Bass Derek Welton, – demonic in a role that reminded me of a Mafia boss. 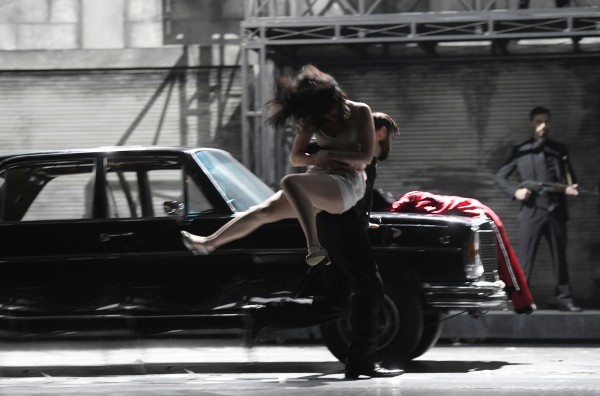 Furthermore we enjoyed Andrew Dickinson, Noel Bouley, Seth Carlco who all did an excellent job with a lot of beautiful singing and acting, we trusted in them in their roles, and others. An Engel were present quite often, well performed by Pierre Henrion. 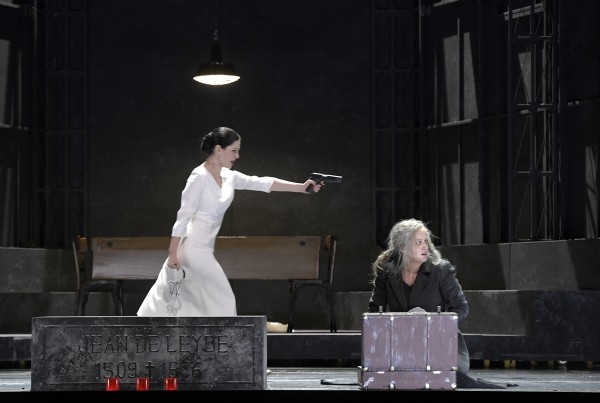 As it is made as a traditional Grand Opera, of course, – as the tradition tells, it includes ballet parts. In this, for us as critics who too works with ballet, it was a pleasure to enjoy the ballet music used for the famouse ballet Les Patineurs, that John Ashton choreographed for the Royal Ballet at Covent Garden many years ago, and for which in fact this ballet music is perfect, it has been reprocuduced several places, I remember it specially from many performances with the Norwegian Opera Ballet in the 1980´.

In this version the movements that the ballet is using is, as far as we know that Py has told the dancers his choreographic movement ideas behind each parts, and they had then got the possibility to develope their own work, in that the ballet company has managed to make it in to the framework that Py wants, and it was good. Furthermore we also noticed in the fourths act some female dancers in more classical, but still contemporary movements.

Giacomo Meyerbeer originally wrote a long overture for the opera which was cut during rehearsals, along with various other sections of the work, due to the excessive length of the opera itself. For over a century, the overture was thought to survive only in piano arrangements made at Meyerbeer’s request by Charles-Valentin Alkan, but Meyerbeer’s manuscript full score was rediscovered in the Bibliothèque Nationale in Paris in the early 1990s, the original parts were discovered in the archives of the Paris Opèra shortly thereafter, and a newly edited edition was published in 2010.

is a Christian movement which traces its origins to the Radical Reformation in Europe. The movement is generally seen as an offshoot of Protestantism, although this view has been challenged by some Anabaptists.

The name Anabaptist means “one who baptizes again”. Their persecutors named them this, referring to the practice of baptizing persons when they converted or declared their faith in Christ, even if they had been “baptized” as infants. Anabaptists required that baptismal candidates be able to make a confession of faith that is freely chosen and so rejected baptism of infants. The early members of this movement did not accept the name Anabaptist, claiming that infant baptism was not part of scripture and was therefore null and void. They said that baptizing self-confessed believers was their first true baptism. – From Wikipedia. 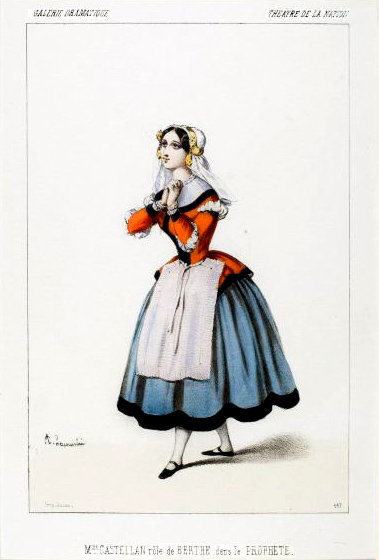 After the brilliant success of their grand opera Les Huguenots (1836), Meyerbeer and his librettist Scribe decided to collaborate again on a piece based on a historical religious conflict. Meyerbeer’s great personal wealth and his duties as official court composer to King Frederick William IV of Prussia meant that there was no hurry to complete the opera, and it was more than a decade in the composition and planning. Le prophète was first performed by the Paris Opera at the Salle Le Peletier on 16 April 1849
. In the audience at the work’s premiere were Chopin, Verdi, Théophile Gautier, Delacroix, Ivan Turgenev and Berlioz, among others.[1] The production featured costumes by Paul Lormier and sets by Charles-Antoine Cambon and Joseph Thierry (acts 1 and 4), Charles Séchan (acts 2 and 5), and Édouard Desplechin(act 3). It involved the first use ever on stage of Léon Foucault and Jules Duboscq‘s electric arc light (régulateur à arc électrique), imitating the effect of sunlight.

Gustave-Hippolyte Roger as Jean de Leyde in the original production of Le prophète.

The creators of the three main roles were Jeanne-Anaïs Castellan as Berthe, Pauline Viardot as Fidès, and Gustave-Hippolyte Roger as Jean. A sensational success at its premiere, the second city to hear it was London, at Covent Garden on 24 July of the same year. It was given all over Germany in 1850, as well as in Vienna, Lisbon, Antwerp, New Orleans, Budapest, Brussels, Prague and Basel. Its tremendous success continued throughout the 19th and into the early 20th century.

Like others of Meyerbeer’s operas, Le prophète lost favor in the early part of the twentieth century and it fell out of the operatic repertoire worldwide, except for very occasional revivals. Since the Second World War notable productions have included: Zürich in 1962, Deutsche Opera Berlin in 1966 (both starring Sandra Warfield and James McCracken) and the Metropolitan Opera in 1977 with Marilyn Horne as Fidès, directed by John Dexter. At the Vienna State Opera in 1998 the opera was given in a production by Hans Neuenfels with Plácido Domingo and Agnes Baltsa in the leading roles. Beginning in 2015, new productions of Le prophète are again appearing in European opera houses. – From Wikipedia.