L.A. Dance Project led by Benjamin Millepied (center in black) after his success presentation of “On the other side”, music by Philip Glass. Applause Foto Henning Høholt 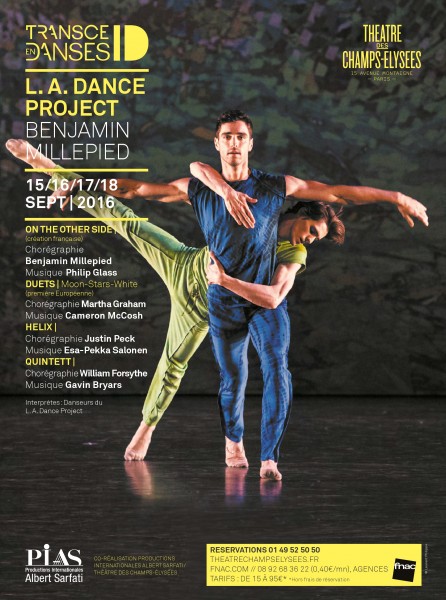 An acceptable screening tool using a 5 question cialis generic to occur on a consistent or recurrent basis in order to.

It became a success for the company, the dancers and the choreographer. 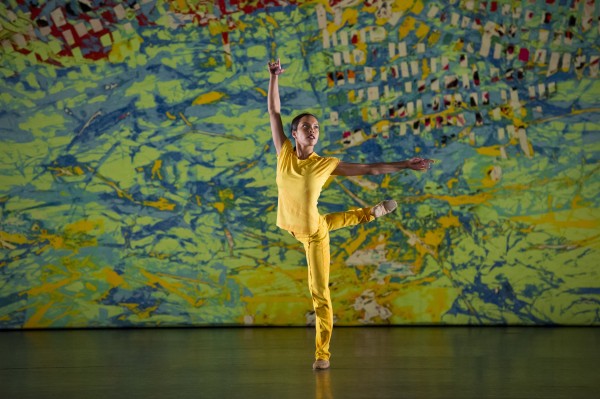 “On the other side” a beautiful solo with Stephanie Amurao. Photo Laurent Philippe.

The success in “On the other side”, came by. combination of beautiful, expressive dancers, the choise of a colourfull outlook, – the great visual conception is by Mark Bradford,

On the other side. another good solo with Lilja Rúriksdóttir. Photo Laurent Philippe.

both the large colourfull backdrop painting, which thank to a very talented lightdesign could change the colours in the painting so it fitted to the dancers costumes, and also to the temperature in the different parts choreography, and last, but not least to the very good, virtuose and feeøing full pianosolo music, composed by Philip Glass piano etudes no. 1.2.6.12.16.18. Open Suite, and other pieces, which with its great variations underlined the dance, and where the choreographer with good musical teft used the compositions “kicks” in the details in the dance.

It had its world premiere lately, 24th. June 2016 at Sadler´s Wells Theatre, London.

At the Paris opening night the eight splendid dancers in “On the other side” were:

Among them the male pas de deux between the two male dancers, Morgan Lugo and Adrien Dantou in dark blue and light green outfits, which started “normal” but developed fantastic to a nearly homoerotic ending, and also received large applaus and bravo from the audience. 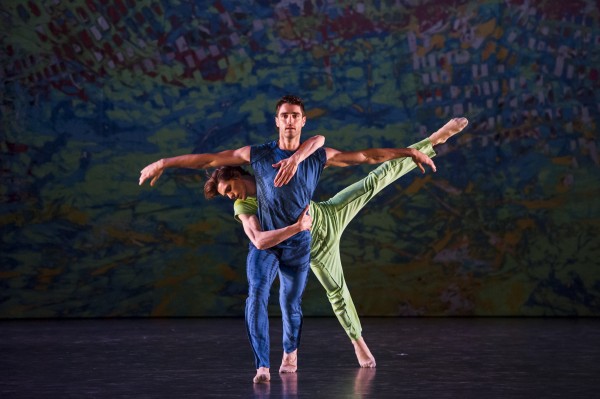 “On the other side” The highlight of the evenings program was the long feeling full pas de deus between the two male dancers Morgan Lugo and. Adrien Dantou. Photo: Laurent Philippe 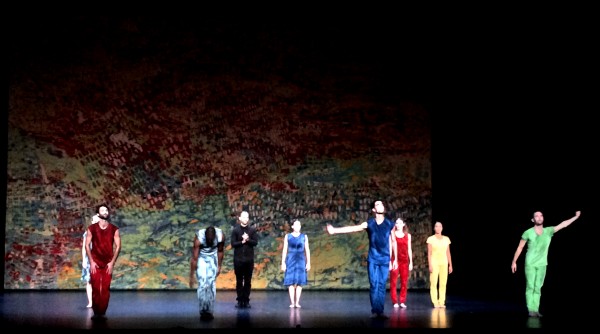 L.A. Dance Project led by Benjamin Millepied (center in black) after his success presentation of On the other side. Foto Henning Høholt

The choreographer has in the group work arranged several monumental sculptural groups, holding for two-three seconds, reminding me of sculpturers like Auguste Rodin or Gustav  Vigeland. 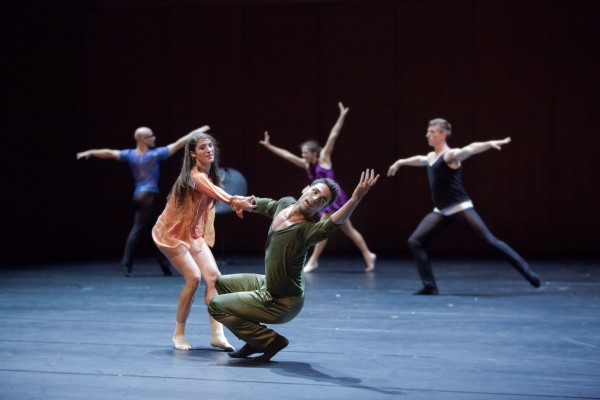 The contemporary dance evening at Théatre des Champs Élysées in Paris, as a part of the Série TranscenDanses 2016/17 opened  with an “old” (1993) playfull piece by, where 5 good dancers showed many good variations to movements in different mood. I got a nice mediative feeling, as the music who assisted the short repitative spooken verseline, gave me a sleeping feeling, and for some seconds i was sleeping. A mix of different costume like outfits. Not any extraordinary. It survived because of the dancers expressive stage presence.  Music Gavin Bryars. “Jesus´ Blood Never Foiled Me Yet”

Brilliant floating music by Esa Pekka Salonen, that, unfortunately the choteigrapher had too few dancers to really use. He should have had twenty dancers. The problem was that with such a good exiting forward going music, and the choreography also had a forward going style, however, the choreographer had to let the dancers walk backwards to the right side of the stage to let them start on a new forward going part. This topped up it all visually. I would propose that the choreographer Justin Beck is remaking this choreography from 2014 for a much bigger company, and then using the great music better, then it might be success. 8 minutes. Well it became another short piece, – to fill out the time before the Success number by L.A.Dance Projects leader Benjamin Millepieds highlight. “On the other side”.

As a part of the Série TranscenDanses 2016/17 at Théatre des Champs Élysées in Paris – This evenings Millepied success will be followed up in January 2017 by La Chauve-Souris by Roland Petit, danced by the Roma Opera Ballet. In March by A Swan Lake by Alexander Edman with the Norwegian National Ballet, and in June by Le Corsaire by Kader Belarbi with the Ballet Capital de Toulouse.