VILNIUS: New Years evening is allways, as every where else in the world, also in the Lithuanian capital Vilnius a lot of classical musical events was performed up to and around the New Years evening. 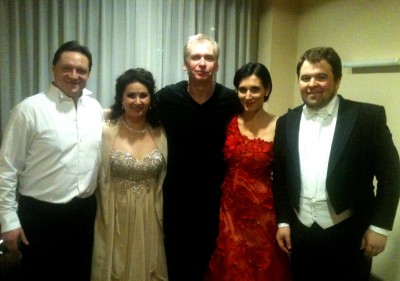 Many of these concerts are presenting some of the most outstanding Lithuanian soloists, such as Asmik Grigorian, soprano together with the Lithuanian international violinist star Martynas Švėgžda von Bekker at the Multiplied Art Museum.

At the Lithuanian National Opera and Ballet Theatre a new production of Johan Strauss d.y. Die Fledermaus (The Bat) was premiered.

– Please enjoy our review at http://www.kulturkompasset.com/2013/01/siksnosparnis-die-fledermaus-in-vilnius/

But the highlight of the New Years evening for me was two Opera Galla performances at the Vilnius Congres and Concert Hall, just across the street from te Opera house, where a quartet of the Lithuanian Opera stars, headed by the leading Lithuanian opera tenor to day Vaidas Visniauskas, Lilyia Gubaidulina, soprano; Ieva Prudnikovaite, mezzo; Laimonas Pautienius, bariton; performed two beautiful opera concerts in cooperation with the Lithuanian State Symphony Orchestra, Conductor:  GINTARAS RINKEVIČIUS. 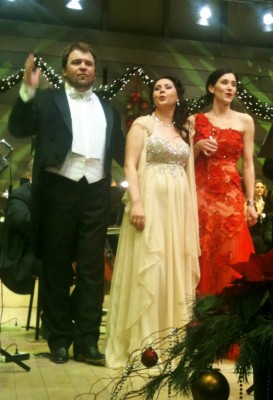 In the first of the two concertos the program was only by Giacomo Puccini, where we enjoyed Vaidas Visniauskas, tenor and  Lilyia Gubaidulina, soprano; in solos and duets from  Tosca and Turandot, of course Nessun dorma, one of Visniauskas great hits,  The wonderful Lithuanian State Symphony Orchestra sung the beautiful “hum” choir in the aria.

Furthermore they played the beautiful intermezzo from Manon Lescout. As encore we got Libiamo from La Traviata by Verdi
. A popular encore

The second of the two brilliant concerts started with Rossini´s Wilhelm Tell ouverture, which allways is giving the audience a festivitas feeling, and that is correct for a new years evening. Lilyia Gubaidulina, soprano opened the presentation of the soloists with the famouse aria “Casta Diva”  from the opera Norma by Vincenzo Bellini, wonderful sung by Gubaidulina. This aria was one of the welknown highlights from the famouse soprano Maria Callas, and got known by the whole world by its partipation in the cinema film Philadelphia.

Then the wonderful mezzosoprano Ieva Prudnikovaitė performed the “Seguidilla” from Georges Bizets opera  “Carmen”   an opera that Prudnikovaitė has great succes in the the titelrole at the Lithuanian National Opera inVilnius, often together with V. Visnauskas as Don José. This was followed with G.Puccini. Calafs aria “Nessun Dorma” from ,,Turandot,, –  wonderfully sung by V. Vyšniauskas. No one could hear, that in fact Visnauskas had got a cold that evening, as it was very cold in Vilnius around new year, and that is not good for any singers. Then another Puccini hit “Tosca”s Vissi d’arte – L.Gubaidulina.  and the quartett from Rigoletto last act ended first part of the concert.

The 2 part opened also with the Wilhelm Tell ouverture by Giacomo Rossini, but after the introduction part with the great Cello solo part, the Lithuanian State Symphony Orchestra surprised the audience by singing all the rest of the ouverture. – That was very popular.

It is wonderful that Vilnius can present such high class singers. Ieva Prudnikovaitee has recently had a great succes as Carmen.  Lilyia Gubaidulina has a fantastic stage present and the audience loves her. Laimonas Pautienius was guesting at in Lithuania home from a busy and succesfull carriere in Germany only for this remarkable event.

The  Lithuanian State Symphony Orchestra is outstanding, very high quality, and they are privilliged to have as their Conductor and music chief:  Gintaras Rinkevicius. It is also with pleasure that I note that Rinkevicius together with other outstanding Opera experts in Vilnius has started Vilnius State Opera.

It is wonderful that Vilnius can present such high class singers. Ieva Prudnikovaitee has recently had a great succes as Carmen.  Lilyia Gubaidulina has a fantastic stage present and the audience loves her. Laimonas Pautienius was home from a busy carriere in Germany only for this remarkable event. 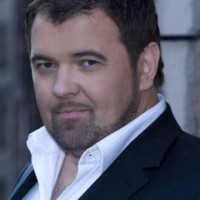 Vaidas Visniauskas, is on the top of his carriere so far.

Wellknown internationally as Kristian Benedikt. Right now he is a celebrity ténor soloist in one of his favourite roles Othello in Giuseppe Verdis opera of the same name.   During the coming periode singing Othello in Vilnius, Modena, Piacenza, Ekaterinburg, Valencia, (with Zubin Metha as conductor) Lima and in Brisbane. He has requests from all over the world also to other main roles, such as Calaf in Turandot (the one with “Nessum Dorma” aria). Furthermore as Siegmund in Die Walküre by Richard Wagner, and in two  Giuseppe Verdi operas, the titelrole in Ernani and the titelrole Manrico in Il Trovatore. Lithuania can be very proud of its famuose international tenor.

High class operaentertainment for the new year in Vilnius.