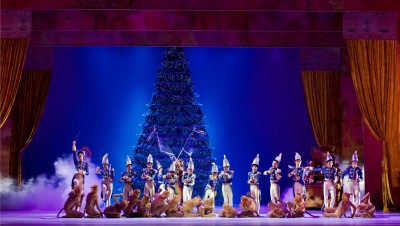 Dinna Bjørn’s ballet The Nutcracker, that she choreographed 20 years ago for the Norwegian National Ballet is also this year the Christmas hit for the Norwegian Ballet´s audience in Oslo, and this year also to several cinemas in the country,  also as an family event, introducing many very young children to their first ballet ever.

The queues to the box office were long, and all the performances are usually sold out very fast.

In close cooperation with Nadine Baylis who is responsible for the costumes and scenography, and was very happy to get the possibility to make these visual beautiful costumes and specially to her first waltz of the flowers, where she used one flower inspiration for each of the female dancers. Ms. Bjørn developed each of the danced “pictures” in a dreamy fairytale way, which underlines the idea. Furthermore the close cooperation with The Norwegian National Opera Ballet School, that started when Mrs. Bjørn was ballet chief in Oslo, together with the head of the school, Stefan Ulner, continued with Knut Breder, former dancer in the National Ballet, who today is the head of the school. The idea was to include as many as possible of its pupils into the performance. 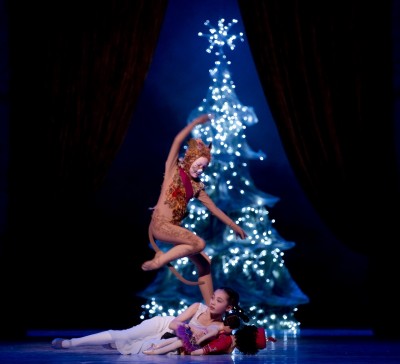 From Dinna Bjørn and Peter Tchaikovsky´s ballet The Nutcracker with the Norwegian National Ballet in Oslo 2013. Ine Marie Esbensen as Little Clara together with the Sergeant of the Mouses. Foto: Erik Berg

This year around 80 ballet school children from very small up to 18 years of age participates on stage, as children in the Christmas party, as mouse’s, soldiers, and in some of the dances in the divertissement in second act. This continues, and for the students at the ballet school, it is inspiring and a hit, who managed to get the leading roles as Little Clara and Fritz, and in these roles we have noticed some of the professional dancers first small solo role.

Scenography, -after moving to the larger stage in the new opera house in Bjørvika and the scenography should be enlarged, the scenography became developed further for the second act by Minna Wallenius, who in cooperation with Mrs. Bjørn took away the lemonade river, added backstage wall carpets with paintings of a large staircase, where the mouse’s could hide under, a moveable prison pavilion,  where the mouse’s could keep the Sugar Plum Fairy ballerina in prison. For the big divertissement a new pavilion “look alike” back wall with two ports, and with a transparent roof, which, by changing the light behind, (-light responsible John B. Read,) – gives each of the famous dances, Spanish, Arabian, Chinese, Russian and others, each their color mode well underlining each of the composer Peter Tchaikovsky’s different modes in the music, and in Mrs. Bjorn’s choreography. 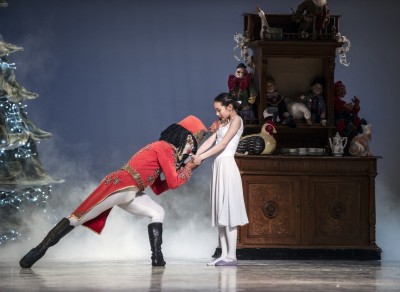 Furthermore, Ms. Bjørn developed the choreography extra for the big opening Christmas party, as preparation for the first filming of the ballet for TV and film in 2012,  this part of the ballet in cooperation with the theatre instructor Marit Moum Aune, to characterize even better each of the families, and the leading characters, attending the Christmas party.

This year with even more new soloists and dancers in the ballet company, who slowly has been enlarged from the usual well 40 dancers up to now 72 dancers listed, the details has been developed using the talents of some of the dancers, such as Daniel Proietto as the Pierrot doll. This year also a new Butler Jørund Langeggen, who then also presented a new fresh Madame Bonbonniere in the divertissement, and a new Dadda, Johanna Suttinen, former member of the ballet company, where they both added new very good details to these roles. 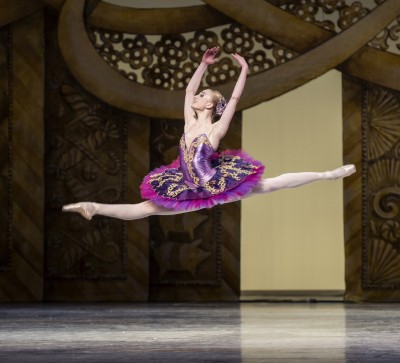 Permit me to repeat myself. It is with great pleasure that Dinna Bjørn and the new ballet chief Ingrid Lorentzen is continuing the great international tradition to include retired dancers in character roles, and in this special Nutcracker case, again this year to welcome two retired dancers Bryan Toney  (still active ballet class pianist), who for decades was Butler and Mme Bonbonniere, now taking over the role as Grand Father, that Fredric Konrad characterized well for many years, continuing with the same Grand Mother Kjersti Rødsten, that I still remember from her Amor in Don Quixote and other great roles, when she was “active” in the company. 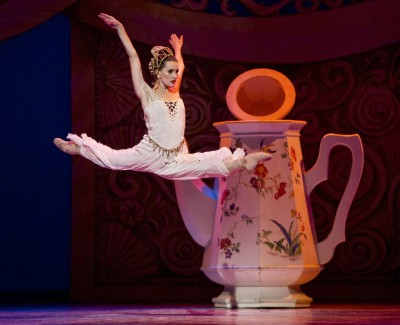 From Dinna Bjørn and Peter Tchaikovsky´s ballet The Nutcracker with the Norwegian National Ballet in Oslo 2013. Stine Østvold in the Arabian Dance. Foto: Erik Berg

This long historically introduction to Dinna Bjorn’s Nutcracker is important, as it underline how important it is for a ballet company to keep traditions, and in this specially case, how important it is to have a good continuation of the tradition of including the pupils and the students from the company’s ballet school in to the real ballet world, to get possibility to participate in real performances, not “only” in the yearly ballet school presentations, which is a must, because it gives the students the possibility to show their quality in larger and smaller roles and details, but to participate in real performances. As for many of them, the dream is to be a professional dancer, and in this case the Norwegian Opera Ballet School is the leading Norwegian ballet school, which together with all the outstanding local ballet schools in all of Norway is the door opener first to the Fagerborg School in Oslo’s ballet education or/and to the Ballet education at the Oslo National Academy of the Arts. From where the National Ballet is getting many of its new dancers educated in Norway.

Nutcracker is a difficult ballet to choreograph and stage, as it consist of several completely different parts, first the Christmas party at home by the Stahlbaum family, consisting of Mr. and Mrs. Stahlbaum and their two children’s Clara and her brother Fritz, furthermore the grandfather and -mother, their staff including the butler and the Dadda. – All the families visiting for the Christmas party, with their children’s.  Furthermore their guest of honor Mr. Drosselmeyer, the magician, who is the turner of the dreaming history. Mr. Drosselmeyer brings a special gift for Clara – a wooden nutcracker. In a jealous fit, Fritz breaks it. Mr. Drosselmeyer quickly repairs it. She is also getting. Little Clara also gets a Sugar Plum Fairy doll. 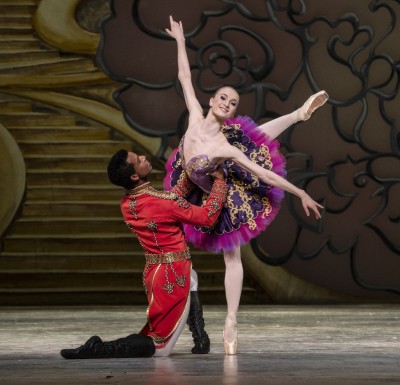 From Dinna Bjørn and Peter Tchaikovsky´s ballet The Nutcracker with the Norwegian National Ballet in Oslo 2013. Osiel Gouneo and Grete Sofie Borud Nybakken as the Prince and the Sugar Plum Fairy. Foto: Erik Berg

After bedtime Clara dreams about all the exiting events during the Christmas party, the mouse’s arrives, the soldiers dress in costumes as the nutcracker that she has got from Mr. Drosselmeyer, the fight between mouse’s and soldiers, the winter dream then arriving to the Prince´s palace with the famous divertissement including dances mentioned to be from many nationalities.

. In 2013 in addition to Oslo, The Russian National Ballet, guesting in Bonn, and the productions in Teatro La Fenice and at the Dresdner Staatsoper on TV – Mezzo and Arte.

In the different productions that I attends by different choreographers, they are all having their personality, of course with some inspiration from each other. In this case is the Oslo/Dinna Bjørn Nutcracker special, as Mrs. Bjørn already in the opening party clearly are introducing all the events that we see when we come to the divertissement, so to say in this production, there is a line from the beginning to the divertissement, which does it easier to understand.

In the beginning we enjoy Mrs. Stahlbaum introducing the coffee pot, that she later is coming out of when she in the dream is soloist in the Arabian Dance. The butler is bringing in a doll figure with Candy, which later is being enlarged to Madame Bonbonniere
. The Chinese and Russian dances are introduced by handing out the squirming men with these figures. The trumpet and the playing horse on a stick used in the Nutcracker army is handed out as a present. The sleigh present in the first act continues enlarged later.

Furthermore Mrs. Bjørn, probably inspired by her link to the Pantomime Theatre at Tivoli, Copenhagen in her home country Denmark, introduces Pierrot, Harlequin and Columbine. And since this is a Norwegian production she too find space for a Norwegian bride and bridegroom in National marriage costumes dancing a kind of a Norwegian folk dance.

As usual there are several casts in the leading roles. This year the opening performance Kári Freyr Bjørnsson was Drosselmeyer, Little Clara was very good danced by Ine Marie Esbensen, Fritz by Matthias P.M. Tænnes. Scott Casban and Stine Østvold formed well Mr. and Mrs. Stahlbaum, the hosts of the Christmas party. In addition to the already mentioned Daniel Proietto as the Pierrot doll. Francesca Golfetto and Marco Pagetti formed the Columbine and Harlequin dolls.

The important role as Sergeant of the mouse’s was danced by Henriette Betten (student at the ballet school). The mouseking and queen was Ole Willy Falkhaugen and Celine Kraal. Then the big Clara is taking over the Clara role, deliciously danced by Cina Espejord, and this year’s new Nutcracker Prince was Osiel Gouneo, while the elegant Snow Queen was danced by Melissa Hough.

The Sugar Plum Fairy was at the opening night beautifully and in the Grand Pas de deux elegantly danced by Grete Sofie Borud Nybakken, as mentioned together with the Prince Osiel Gouneo.

This year I shall not mentioned all the soloists in the divertissement, only Lisa Nielsen together with 6 school students in the pipe flute part, and the critic prize winner Aarne Kristian Ruutu as the leading dancer in the Russian Trepak. Hedda Staver Cooke dances the Flower Fairy.

The famouse music by Peter Tschaikovsky is in the best hands with The Norwegian Opera Orchestra, which know the music very well. This year headed by the music chief himself, John Fiore, who formde the lines in his personal way, and gave the dancers good tempi and inspired the orchestra, members of the Norwegian Opera´s Children Choir, led by Edle Stray-Pedersen. Concertmaster the opening night Catharina Chen.