by Benjamin Britten in Bologna, Italy, at Teatro Comunale, 2017 May 18th 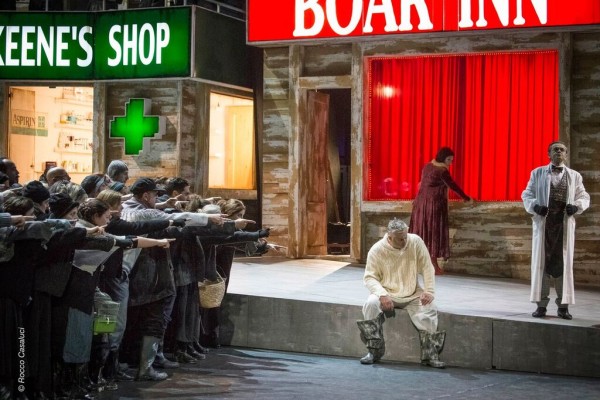 Ian Storey and the choire

BOLOGNA/ITALY: Peter Grimes, one of Benjamin Britten’s most important operas, is staged these days at Teatro Comunale in Bologna for the first time ever, as it had never been staged in that city before.

The British musician composed this opera approximately in 1943-44, and the premiere was in London in 1945
. The librettist Montagu Slater was inspired by George Crabbe’s 1810 poem The Borough, and worked closely with the composer and his companion Peter Pears especially regarding the definition of the main character.

In fact the character of Peter Grimes, a dishonest violent drunken fisherman as comes out from Crabbe’s text, assumes in Britten’s work different connotations, he is certainly a negative hero, but also capable of moving the “emotional participation” of the audience as a lonely man, a social outcast, persecuted by the perbenist inhabitants of the village where he lives, a “vinto” as Giovanni Verga would say, seeking at all costs a ransom of his own life but will succumb to events until suicide at sea.

A falsely perbenist and essentially hypocritical varied humanity lives in the Borough, people who attend the church of Reverend Adams but that also goes to get drunk to the inn of indulgent Auntie with her two easy-going nieces.

This is the first opera of a kind of Britten’s own “moral” itinerary, the musician will insist on such important themes of miserable men, “last” people, victims, with the subsequent operas The Rape of Lucretia, Billy Budd, The turn of the screw. 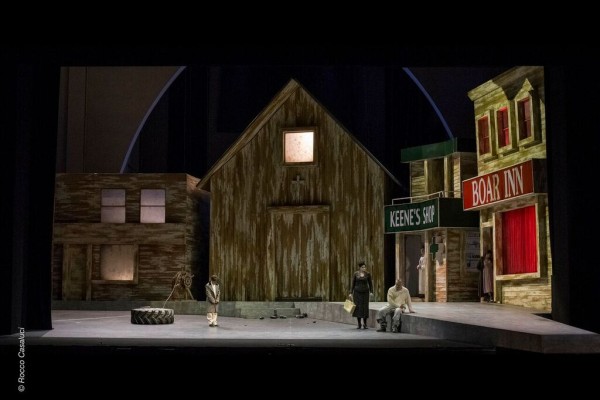 It is always a great emotion to see on stage one of the cornerstones of the Twentieth century music, we must say that this edition in Bologna is musically fully respectable, having as a fundamental aspect the careful meticulous intense concertation by conductor Juray Valčuha
. The still young Slovak conductor seems to know this opera as the back of his hands, extolls the theatrical pace and the timbre refinements, accompanies the great lyrical pages reserved to the voices with great skill looking remarkable above all not only in “Sea interludes” but also in Grimes’ monologue before suicide, where the fusion with intentions and the spectacular performance of Storey touches absolute vertices.

The Orchestra and Coro of the Teatro Comunale di Bologna (well trained by Andrea Faidutti) followed with great diligence the conductor’s wills. 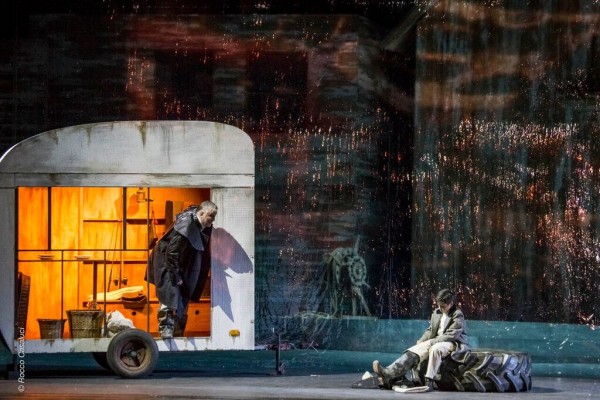 Ian Storey in the titelrole, and Carlo Alberto Brunelli as the young goy..

English tenor Ian Storey is the great main character of this performance, he faces the complex character with the vocal possibilities of a nearly sixty year old singer who had an onerous international career, but making a strong point of his on stage experience. His voice is certainly not uniform but always extremely vivid in the phrasing and still able to be lightened in suggestive well sustained mezzevoci, apart from some notes occasionally not well sustained

. The tormented and unhappy fisherman is quite credible also for the stage presence of the tenor until to the great emotions he gave us in particular in the great hallucinated monologue of the second scene of Third act, the one that begins with Steady. There you are.

Charlotte-Anne Shipley, a young English soprano, was a great Ellen Orford. She created a beautiful, maternal and trepid character towards Grimes and the young hub. Vocally she sports a clear and well issued voice, also very expressive in her lyrical pages, especially in the “embroidery aria” Embroidery in childhood. 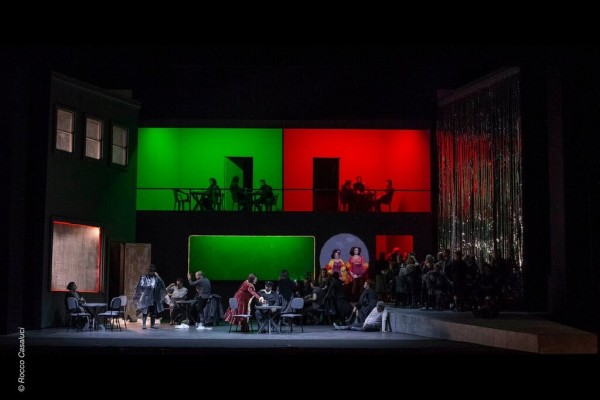 First of all we have to appreciate the substantial homogeneity of all the singers in secondary characters, all of them being extremely important both vocally both scenically
. However we must mention at least Mark S. Doss who was a great Balstrode, Paolo Antognetti as Bob Boles and Gabriella Sborgi as Auntie. All the other singers were rather well.

The visual part of this Peter Grimes directed by Cesare Lievi is more disappointing and just plain, with minimalistic and even too essential scenes by Csaba Antal and just normal costumes by Marina Luxardo.

Mr Lievi stages the story in an ordinary manner without an idea worthy of that name, everything is as expected, everything is quite anonymous and foreseeable, any hint of a possible sexual bond between Grimes and the young hub is absent, the only “idea” but really a very relative one is Peter Grimes’ hut which is actually an old caravan obviously parked quite overhanging the cliff. Particularly wrong is the absolute lacking of the sea and water (unless the director wanted to allude to the sea with a banal plastic towel dropped to mid stage) elements that come out at every musical page of the splendid score, and not only in the famous “Sea interludes”. In fact the director seemed not to follow any of the great descriptive solicitations coming from the orchestra and the great concertation of conductor Valčuha. 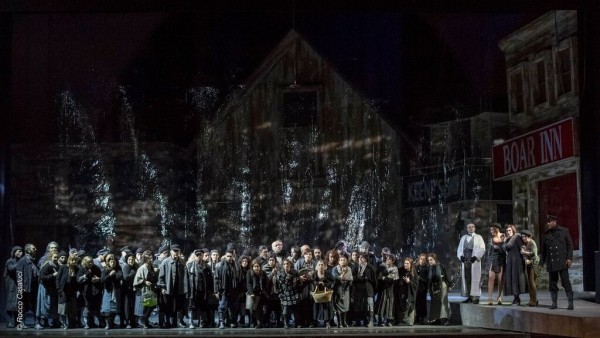 The audience was fairly large and at the end reserved enthusiastic applause for everyone but above all for the conductor.