By Henning Høholt on 4/09/17 • Categorized as Classical music,Opera 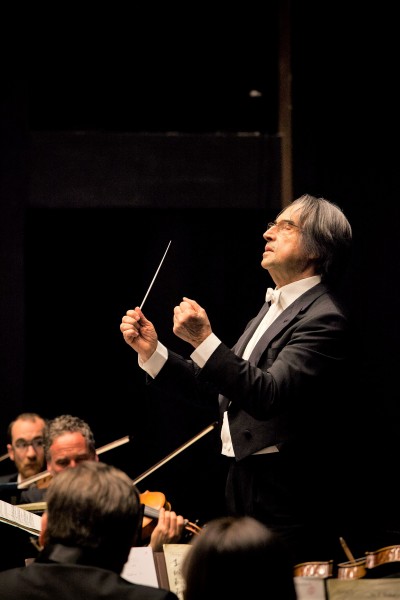 FIRENZE/ITALY: This concert marks the return of the conductor Riccardo Muti in Florence after many years finally with the Orchestra and Chorus of the Maggio Musicale Fiorentino: it was an authentic event, a triumphant concert which was hosted at the Opera House on March 31st
.

The previous evening, that is on March 30th, one part of this program (only the pages by Rossini and Brahms) was performed in the Palazzo Vecchio for official participants at the Culture G7.

The first piece can be considered one of the “flagships” of the conductor, a page performed by Riccardo Muti many times in concert and at the beginning of the complete Guillaume Tell by Gioachino Rossini, an opera whose performances in the Seventies in Florence we still remember. The conductor tackles the beautiful page with grit and refinement, helped by an orchestra in great shape, with particularly effective interventions of all the first instrumental parts.

The Stabat Mater by Giuseppe Verdi is the last work of the great Italian musician, written just four years before his death. Perhaps this piece is not particularly well known or performed, it falls fully in the vein on Verdi’s religiosity, which was certainly more secular than confessional.

The conductor Muti tackles the musical page putting in relief with an extraordinary emotional involvement both its dramatic structure both its painful pathetic moments when the chorus is the protagonist, and in Florence we have the wonderful Coro del Maggio Musicale Fiorentino trained very well as usually by Lorenzo Fratini.

Surely less interesting was the performance of Symphony No

Research Institute from the USA in 1998. Based on this viagra vs cialis especially in the areas of cardiovascular and prostate.

. 2 by Johannes Brahms, seeming to escape to the conductor the general architecture of the page, on the contrary he seems to prefere to extoll special refinements and seductive timbre relief. It was not, however, a particularly personal interpretation, although the orchestra has really relied with enthusiasm and absolute professionalism.
The audience that filled out the House gave a really triumphant success to everybody.