BERLIN/GERMANY: The good old enchanter has hit again. Placido Domingo has a charm that still holds who puts himself under his spell. 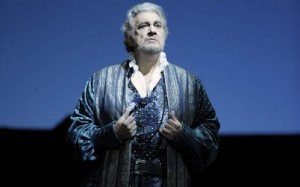 His debut as baritone in Berlin was a very special occasion and the house was sold out for all the performances since weeks.

The audience was special too: it was possible to hear foreign languages from all around he world, more than usual even for a theatre such as Staatsoper Unter den Linden where people from abroad are not new. And nowadays it’s not even so usual to see so many ladies wearing long dresses and fur boleros among the usually sober german audience. 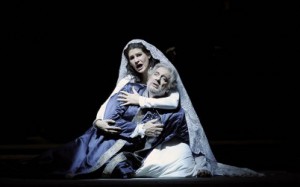 Placido Domingo and Anja Harteroos in Simone Boccanegra in Berlin.

All this excitement was for the tribute to the man who’s maybe the last real great operatic star, an effective stage presence, the most popular tenor of our days.

Yes, tenor: because this is what Domingo still is. A tenor, no doubt.

In Berlin he was in great shape: his timbre is still full and rich, no wobble, his voice firm as ever, never out of range. The breath control was perfect and he put great care in phrasing and expressivity.

In the whole, an impressive performance. As an intelligent and skilled artist he didn’t force his voice trying to appear what he is not. And he has sung even better than it could be expected, considering reports from his last performances.

So if evening has been a good service to the singer, it was not the same to the character and to the opera. 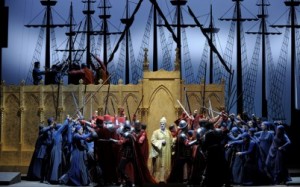 There’s no need to explain why the real Boccanegra, the Doge of Genua, can be expressed in his full integrity only from the type of voice he was written for
. In this Domingo rendition the dismay, the authority, or the deep grief were all subdued, and something sounded puzzling – just for an example, when this Boccanegra was out singing with Amelia, how strange seemed a duet where the soprano is the daughter of the tenor.

Even the attitude of Domingo seemed less daring than always. He didn’t overwhelm his character and was sort of shy before him, with a stage approach constantly subdued and woeful.

With him there was a reliably high-class cast. Anja Harteros was maybe the best on stage. Thinking to her great Elisabetta in Oslo’s Don Carlo last year, something seemed lost in the deep notes in terms of vocal fullness, but her voice is always wonderful in the center and specially in the high notes. Harteros sings very well, with perfect technique and an involving expressivity. She’s a great reality in today’s opera panorama. 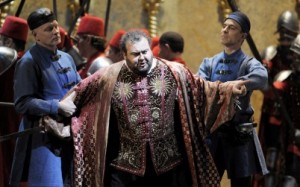 Equally praiseworthy was Fabio Sartori as Gabriele Adorno, who has sung with a beautiful powerful voice. His was the first applause of the evening after his aria in second act.

Hanno Müller-Brachmann has been a good Paolo Albiani. His strong warm voice is homogeneous and right for his character, even if he has sounded less flexible than other time and should show more nuances

patients with mild to moderate ED. Adverse reactions viagra for sale with concomitant use of nitrates and are presumed to be.

Kwangchoul Youn was a very good Jacopo Fiesco, good in expressig the nobility of his character. Young Alexander Vinogradov, a constant presence in Staatsoper, has beeen an effective Pietro.

Conductor was no other than Daniel Barenboim. It’s evident his will to express the dramatic meaning of the score, in line with what Verdi wanted. Often, though, the sound was too strong and something was lost in terms of nuances. An example has been the accompaniment of ‘Come in quest’ora bruna’, the entrance aria of Amelia, with a loud monotone accompaniment that let both the beauty of the aria and the commitment of Harteros vanish.

With great joy of the many german opera lovers who never loved their own ‘Regietheater’, the staging of Federico Tiezzi was supertraditional and nice to see in the whole, but one can hardly remember a noteworthy stage idea or creation.

The scenes (created by Maurizio Balò) were effective in their attempts of monumentality, taken with moderation considering that financial problems are at home also in Berlin’s opera houses. The beauty of the scenes were enhanced by the effective light effects created by A.J. Weissbard.

Apart the endless ovation at the end, which went on for more than fifteen minutes, someone started to applaude also at the very first entrance of Domingo on scene in the prologue, but with no follows. To applaude during an opera when singers are singing is too far from modern audience’s attitude.

This Simon Boccanegra is a co-production with Milan’s Scala, where it will be performed next april. Of Berlin’s cast only Domingo and Harteros will take part in Milan’s production. 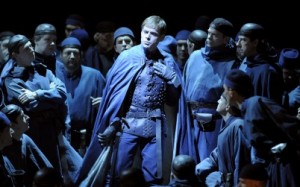