By Christophe de Jouvancourt on 2/03/12 • Categorized as Ballet 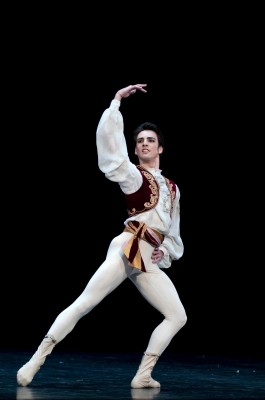 Gala of the soloists of the Opéra de Paris – Ensemble Poirel, Nancy

NANCY: The soloists of the Opéra de Paris – understand “sujets”, “coryphées” and “quadrilles” – presented a very beautiful gala at the theatre Poirel in Nancy. The program has been composed with a fine taste. Many classical “grand pas-de-deux” and also some more recent works of the 20th century have been presented. It was a pleasure to discover some of the young generation of dancers of the Opéra de Paris. They all have beautiful lines and a specific artistic sense, which is really representative of the French style.

. It is really a good initiative and the audience was particularly present and enthusiast.
All the dancers showed a great artistic sense and have a strong technique concerning the solo parts. Unfortunately, we cannot say the same thing concerning the proper “pas-de-deux” technique.
If one can understand it, –  coming from the “quadrilles” or “coryphées”, he can’t when the dancers are “sujets”, which is the last rank before first soloist. The “pirouettes” and the “promenades” were sometimes too rough and insecure. It is always hard in this kind of gala to have the proper comfort to dance a pas-de-deux because of the risk for one of the partners to get injured or sick. There are always changes in the couples and the dancers have to adapt themselves.

Laura Bachman (quadrille) and Hugo Vigliotti (coryphée)had the pleasure to open this gala with a “pas-de-deux” extracted from Carnaval à Venise, by Marius Petipa, on the music by Cesare Pugni. They both have a great presence and a good sense of musicality. The technique was very fine, even if some preparations are a bit untidy sometimes. But one can regret that the male dancer was quite restlessness to support the ballerina during the “promenades”. However, it is sure that those young dancers will progress and be more secure in few years. Then, one of the most expected part was the “pas-de-deux” from Swan Lake, but it was just good enough. It was danced by Amandine Albisson and Daniel Stokes, both “sujets”. The Prince was nearly absent even if the ballerina was doing her best to be a convincing Odette. The couple seemed to be too concentrated on the technique to show a more natural interpretation.
On the other hand, Allister Madin made a great impression and was excellent in La Esmeralda, with Laura Hecquet. Their interpretation was very convincing and they were able to communicate their passion of dance. Technically, there is nothing to say, except maybe the proper “pas-de-deux” technique that could be even finer
. But it is completely shadowed by the quality of the interpretation. Hecquet was a very sensual and playful Esmeralda.

Eventually, the more interesting and promising couple of the evening was formed by Sae Eun Park, a young Korean who has just been hired in the company, and Pierre-Arthur Raveau, who has recently been promoted “sujet”. Their interpretation of Romeo & Juliet was really exquisite. Everything was in it, the innocence and the hot headedness of youth, complicity, emotion, and technique. The audience recognized the difference and offered to the couple wonderful applauses. However it is a pity that the couple didn’t work as well in the Black Swan “pas-de-deux”. Raveau seemed a bit exhausted during the Coda and missed his “tours à la seconde” and last “pirouettes”. He is a very beautiful Prince and has everything to become a first soloist, but he has to get tougher if he wants to be able to last a whole ballet.

The quality of the Gala was really high and the audience of Nancy answered more than positively. It was a wonderful opportunity to discover the young talents of the National Ballet. The theatre was full and could have easily been filled a second time. Let’s hope that this first time could become a tradition.