All Photos from the performance Wilfried Hosl. Bayerisches Staatsoper. 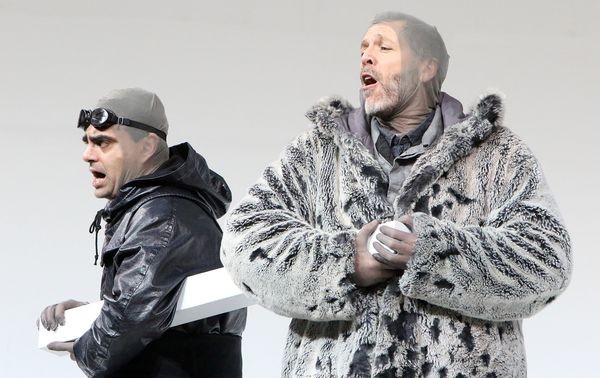 MUNICH/GERMANY: The exiting history about the two South Pole explorers Roald Amundsen and Robert Falcon Scott in 1911, had now found its way to the opera world, on a libretto, based on many facts, formed in a fiction way by Tom Holloway, with an interesting musical frame by the composer Mirislav Senka, who has been forming a composition for 12 singers, all outstanding soloists, inclusive two world stars,- the famouse baryton Thomas Hampson as Roald Amundsen, who well prepared and with a large exploration experience, with his group, (of 5 barytons), reached the South Pole first at 14. November, and the contrasting group led by another opera world star, the world famouse tenor, Rolando Villazon at the head of his group (of 5 tenors) of explorers.

The composer call his opera “A double opera in two parts”

Interesting to hear and see how these two, Rolando Villazon and Thomas Hampson, usually classical opera singers, managed to use their brilliant singing talents in a demanding contemporary musical composition, with very many difficult passages and parts, a lot of demanding high tunes, where the audience specially loved to enjoy mr. Villazons well knovn top tunes, which , during the way, reminded me of his famouse many high C’s in the Donizetti opera “Daughter of the Regiment”. But in this connection with a well developed avanciert contemporary sound frame around him, where also the composer has made his high top tunes much longer than usual. Thanks to the brilliant musicality of the conductor Kirill Petrenko, and his first class collaboration with the singers, it became a success
.

During the musical developement i found my self finding links to ideas from other composers John Adams repetitive minimalisme, and to Benjamin Britten, for me specially from a part in Peter Grimes.

The composer, Miroslav Srnka, has build up his opera well planned, organised, and formed with a big opening part with all ten members of the two explorer groups, spite, not together, as they are both groups at Antarktis at the same time, but never together at the same time atvthe same place during the expedition. Therefore split up, like in each their camp, on each their side of the stage.

The opera is elegantly opened by a morse message, before they make a vocally large ensemble, where the tenor and baryton groups in a cantate way are forming and developing the musically material well.

This opera has big variations, from very powerfull parts to intime pianissimo parts with only one or a few singers. One of these parts, a small quartet with tenor, baryton, soprano and mezzo was among the musically highlights.

During the way the good cast shows a lot of variations of their different personalityes, such as the beautiful “duet” where Lawrence Oates, – (Dean Power), from the Scott group, and Hjalmar Johansen – (Tim Cuypers), from the Amundsen group are writing each their letter to their mothers.

These two female figures are as a good fiction enclosed in the history.

It gives a variation in the sound to have two good female voices, soprano and mezzo, first to give the variation musically, but also through the libretto to give the history a background around the guys “on tour”.

An interesting detail is the composers elegantly use of the idea to let the singers keeping their tune line, when they are singing it, as it is, but then letting the orchestral line vibrating a slightly bit around this vocal line, under and over it. This idea gives extraordinary feelings in the sound, that i am not familar with from before. For the singers it must be very demanding to keep their master tune so safe, when they hear that the orchestral line is mowing slightly up and down around their tune. The singers managed to make it, successfully- bravo. – Well, this is an effect, but a deliciouse idea of developing musically ideas.

The whole opera ends in the same way as the opening with a morse message. In the beginning Scott is being very surprised, as we know, as it originally was Amundsens plan to go to the North Pole, a plan he changed, and desided to go to the South Pole instead. These final morse signals are before Roald Amundsen, now well at home in Norway, tells the sad message that Scott and his crew died during the returning part af their exspedition at the arctic before reaching home. 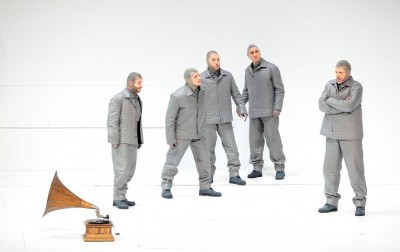 During the performance many good regi details appears. Regie by Hans Neuenfels.

In the opening part, both groups are celebrating that they are ready to start the expeditions, first playing at each their piano, then on each their old fashion grammohone a la “His Masters Voice”. Where the Scott group enjoys the tenor Enrico Caruso singing the Flower aria from Bizets Carmen and the famouse norwegian soprano Borghild Bryhn-Langaard. In these parts the orchestral sound is woven in to the orchestre partitur.

In happy parts of the opera we enjoy the happines in both of the groups. Mr. Villazon as we know him well from other classical operas are brilliant in his dramatic, and happy visuality. On the way back from South Pole, Johansen (Tim Cuypers) see birds and shows his happynes well visually. Good actor.

In some of the music i feel connections to other operas.

Honestly to get such a difficult history to work, is very difficult, to help making it, the production theme has had a great help, to succeed by the two dramaturgists Henry Arnold and Malte Krasting.

SOUND INSTALLATION before and after. 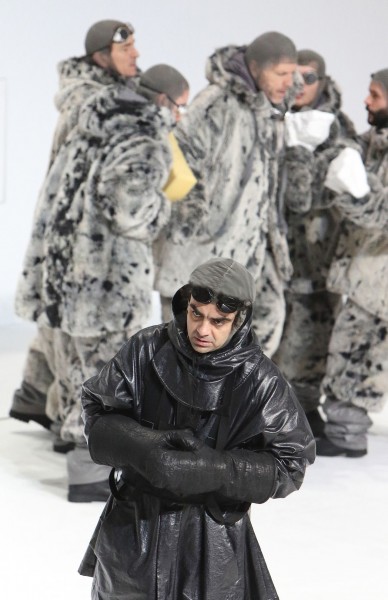 Rolando Villazon in front as Scott, behind all the Amundsen staff, with Thomas Hampson in the centers Roald Amundsen, Foto Bayerisches Staatsoper

Up on arriving and leaving the operahouse the audience got the right sound feeling of how hard the weather around the South Pole could sound.

Due to a 12 min sound installation.

Unfortunately, the composer has not in any way managed to bring this feeling in on stage, absolutely not in the sound.

Neither has the regisseur Hans Neuenfels,  nor the scenographers, Katrin Connan and Hans Neufels,  managed to give us any feeling if that.

This is a big minus for the production.

Many times the singers on the text are mentioning the bad weather, the snow, ice, but the regi and scenography dont cats it at all.

Therefore these two importent part of a demanding large musically work, didnt get any help at all from the regi or scenography. Furthermore, and in fact, i see that even more seriouse.

At the South Pole, when it is clear weather there, there is a perspective. At this production there is no perspective at all, this stops and spoil the visual experience of the entire production. At a modern theatre, this could have been made so beautifully and have given this production the little extra lift, that its music and the entire history had deserved. It don’t help, three times to let members of the Amundsen group falling down in a gletcher, when we dont have any feeling of wild icy nature, or even just an open nature around them. BUH.

The scenography looked like a cold hospital interior in stage with two entrances to the left and three to the right, and some (two) verical openings on the back wall, – for the sleidedogs for Amundsens group and ponys for Scotts group. It looked like office windows in the hospital

Sound from the outside sound culisse could have been helping a lot. And some snow and wind. 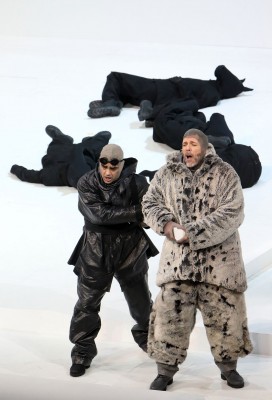 To this production the costumes are made by Andrea Schmidt-Futterer.

The Bayerisches Staatsoper has produced a very good and large program book about the South Pole opera, including libretto, photos, many interesting stories written by outstanding writers: Tor Bomann-Larsen about The Dream of the South Pole,  further more by Ute Revert, Michael Beckman, and Erich Bourrel.

I have the feeling that this opera could go in to the history of music as a renewing. 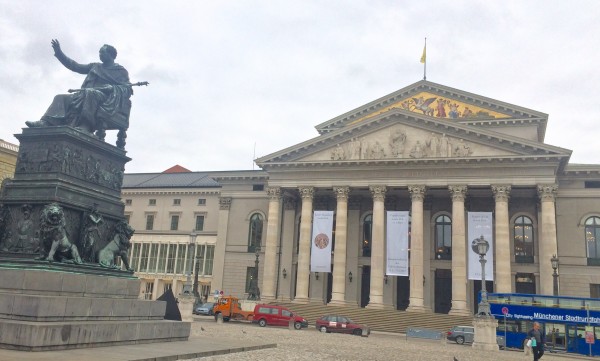 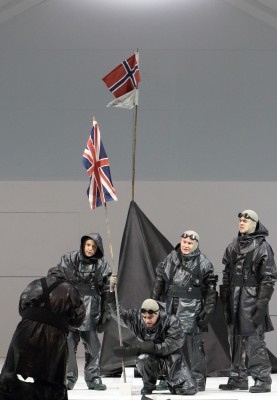 The explorer group of Robert Falcon Scott has reached the South Pole. 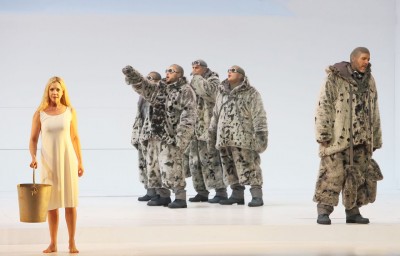 The Roald Amundsen Group, and (left) Mojca Erdmann as Amundsens Landlady. All Photos from the performance Wilfried Hosl.

All Photos from the performance Wilfried Hosl.