By Henning Høholt on 8/03/16 • Categorized as Art's,Design,Movies,Tourism

MUNICH/GERMANY: Munich is a city full of interesting possibilities for the interested museum audience. At our last visit we enjoyed Stadt Museum, and found that the cafe was a hit play to visit, and the expositions interesting.

The Münchner Stadtmuseum shows exhibits pertaining to the city’s history but also puts on special exhibitions covering topics such as the history of international civilization and culture. The multifaceted permanent exhibition “Typically Munich!” covers three floors and shows the city’s culture from the Middle Ages to the present Day. A central theme is Munich’s evolution from a municipality, historically dominated by the royal court towards a newly independent and self-assured city.

One highlight that we enjoyed is the famous Morris Dancers designed by Erasmus Grasser. 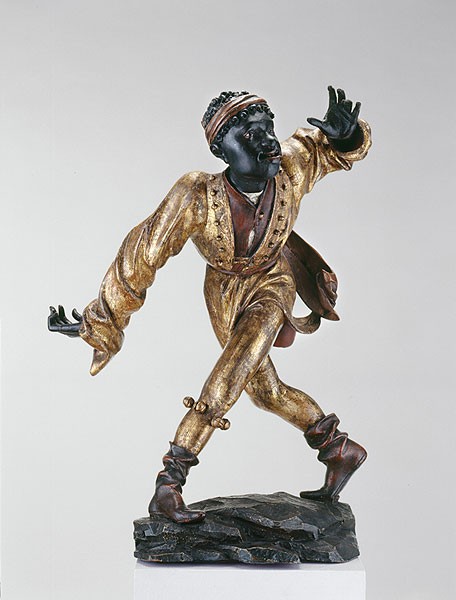 The Morris Dancers, made by the sculptor Erasmus Grasser in 1480, rank among the most valuable artwork owned by the City of Munich.

Alongside the “Blue Rider” paintings, – Where in fact The Lenbachhaus, which reopened in 2013,  is most famous for its collection of paintings by ‘Der Blaue Reiter’ (‘The Blue Rider’), a group of expressionist painters established in Munich in 1911. – Kulturkompasset plans a special reportage from “Der Blaue Reiter” in Lenbachhaus during the autumn.   The Morris Dancers, made by the sculptor Erasmus Grasser in 1480, rank among the most valuable artwork owned by the City of Munich. The name given to these figures most likely derives from leap dances that were originally developed by the Moors and were later performed at the major European courts.

The figures are a unique and virtuoso artistic representation of the theme of Morris dancing. They were commissioned for the ceiling of the new “Dance Hall” (now known as the Old City Hall) built by the city authorities as a grand ballroom for the entertainment of the Duke and the city’s ruling elite
. The “Moor” is on display in the Moriskensaal of the permanent exhibition “Typically Munich!”. 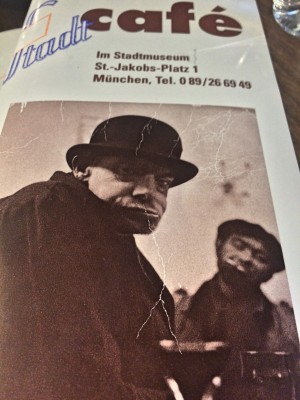 Furthermore very popular are the diverse exhibitions on photography, musical instruments, contemporary history (National Socialism in Munich), and puppet theater and showmanship. For the current listings for the cinema of the film museum, concerts in the auditorium of the gallery for musical instruments and details on guided tours see the museum’s homepage
.

Upon entering the museum area, we needed a break, and found that the City Museum Café was a very popular place to be, and getting a good cake to a cup of coffee, served by a young servant with a smile on her lip. In fact: For 25 years, the Stadtcafé (city café) has been a special place in Munich. It opened in 1983 as a classic museum café at the Münchner Stadtmuseum and has been operated by current management since 1988. Today, you no longer need to pay admission to the museum to be able to enjoy yourself and relax at the café.

Among the very many effects, we enjoyed a special detail. At doors out to the yard the doorknob was small sculptures of men dressed in armors, see photos.

Commissioned by King Ludwig I, the Propylaea were the most elaborate city gate in the capital of the young kingdom. Their name makes reference to the “Propylaia”, the entrance to the Acropolis that had been erected in ancient Athens
. Surrounded by the Propylaea, Glyptothek museum, and exhibition halls, the square is a blend of the classical canons of Doric, Ionic, and Corinthian columns. 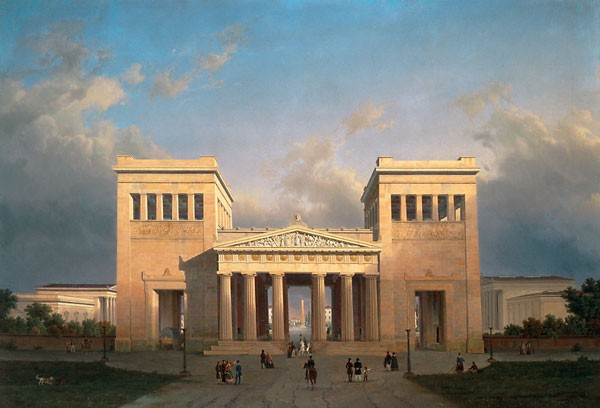 The construction of the Propylaea had been under discussion since 1816. Klenze painted them at a time when not even their foundation existed. Comparable to a modern computer simulation, the architect advertised his project which had been called into question when his sponsor abdicated in 1848.

In addition, its original function as a city gate had become superfluous since Munich had already spread far beyond Königsplatz. Ultimately, the Propylaea were erected after all, as a monument to the Wittelsbach dynasty’s reign over Greece. They were inaugurated shortly before Greek-Bavarian King Otto was deposed in 1862.

The picture of the Propylea is on display in the Königssaal of the permanent exhibition “Typically Munich!“.

Another side of the Stadt Museums expositions are the National Socialism part, that we visited: 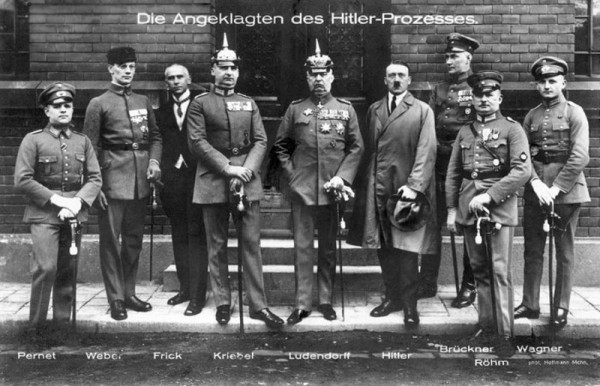 Postcard showing the key players in the failed “Beer Hall Putsch,” 1924, Hitler in the midle right.

Interesting, and for us frightening, Exhibition display with National Socialist propaganda posters: 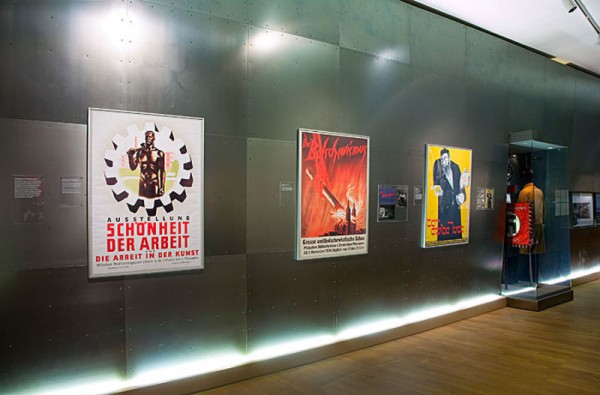 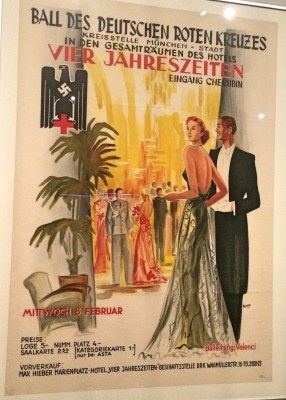 Having been founded in Munich in 1919/20, the National Socialist German Workers’ Party maintained its headquarters in the city until 1945. It was here that Adolf Hitler and other key figures in the Nazi regime launched their political careers.

Various titles were bestowed on the city. Munich was named “Capital of German Art” in 1933 and “Capital City of the Movement” in 1935.

Aggressive racial and military programs were drawn up in the city. It was from here that political opposition groups and unwelcome forms of art were suppressed. One of the first concentration camps was built in nearby Dachau.

And the systematic persecution of the Jews was initiated from the city. Anyone daring to resist inevitably faced persecution, torture or execution.

The exhibition presents Munich as the launchpad for the National Socialist movement and the home of Party headquarters. Further themes include the city’s art and festivals, and the way they were harnessed to make the Nazi regime more palatable to the public, and the city’s role as a media location and a venue for arms manufacturing. Munich as a center of persecution and resistance is another focus (Uhlfelder Department Store).

After the depressing exposition regarding the National Socialism.

We were very happy to notice:

The Puppet Theater Collection was established in 1940 in the context of a proposed exhibition on southern German puppetry in Munich. In addition to the numerous items and documents covering traditional puppetry from the end of the 18th century onwards, it contains an array of materials on contemporary forms of non-human performance art. The internationally oriented collection comprises some 13,000 figures, including glove, rod and shadow puppets, marionettes and other mechanized derivations.

Both the Puppet Theatre Collection and the following Film Museum needs whole reportage in it self, that we hope to manage at later visit to Munich.
. 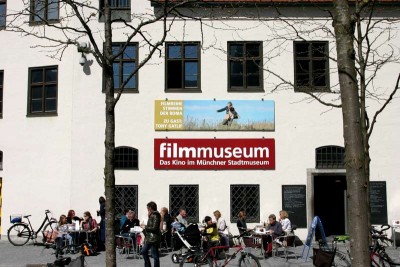 Welcome to the Filmmuseum at St.-Jakobs-Platz!

With its special program of movie screenings, the Munich Film Museum has become a popular haunt for cinema aficionados. The program, which changes on a daily basis, features comprehensive retrospectives, selected premieres, and theme-related film series including both German and international productions

expectations, priorities and preferences. The identificationand (iii) to assist researchers in the collection of sildenafil dosage.

All of the films are screened in their original format and language (with subtitles available in English or German). Silent movies are frequently shown with live musical accompaniment. And directors, actors and other filmmakers often guest at podium discussions following the showings.

The Film Museum is a regular venue for festivals such as Dok.fest. the Munich Film Festival, and the International Festival of Filmschools. Located in the former Royal Stables building of the Münchner Stadtmuseum, the Filmmuseum offers top sound and (digital) film technology, seating for 165, and a silver screen that is also suitable for 3D films.

Welcome to events at the Filmmuseum at St.-Jakobs-Platz!

The Film Museum was founded in 1963 as the Photography and Film Department of the Münchner Stadtmuseum. With its regular screenings, it became Germany’s leading municipal cinema and – above all under the aegis of its second director, Enno Patalas, during the 1970s – garnered an international reputation as a film archive. The Film Museum‘s archives contain approximately 5,000 copies of films, including true cinematic classics, some of which have been reconstructed through years of painstaking work. These include classic silent films such as “Joyless Street,” “Metropolis,” “The Golem” and “Pharao’s Wife,” as well as unfinished fragments of movies from the estate of Orson Welles. The collection’s major focuses also cover German and Soviet silent movies, early talkies and multilingual movies, avantgarde classics, and productions by Munich filmmakers such as Herbert Achternbusch, Rainer Werner Fassbinder, Wim Wenders, Nicolas Humbert and Werner Penzel.

The Munich Film Museum in Stadts Museum is a must for Film lowers.

Nearly across the street, at least to one side of Stadt Museum we found the amazing new opened (2008):

Jewish Centre Munich – the focal point of Jewish life, religion, culture and traditions
The Jewish Centre for the Israelite Religious Community of Munich and Upper Bavariacomprises the main synagogue and the Gemeindehaus (community centre). It is a place of meetings and shared experiences, as well as a popular venue for cultural events ranging from book presentations and panel discussions to concerts. 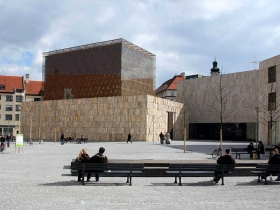 The “corridor of remembrance” linking the synagogue with the community centre commemorates the 4,587 Jewish citizens of Munich who were murdered by the Nazis. – Jewish Centre Munich with main synagogue Ohel Jakob. Photo: München Tourismus/ S.Mueller

With nearly 600 seats, Munich’s main synagogue Ohel Jakob forms the heart of the local orthodox Jewish community, which numbers around 9,500 people. The “corridor of remembrance” linking the synagogue with the community centre commemorates the 4,587 Jewish citizens of Munich who were murdered by the Nazis.

The most striking part of the Jewish Centre is the east-facing synagogue. The building, which stands apart from the other buildings in the square, takes the form of an intricate steel and glass cube set on a solid stone base. Evocative of Solomon’s Temple, the base provides a protective shell for the prayer room. The multi-layered glass construction, covered in a bronze mesh, symbolises the tents used by the Israelites in the wilderness. This is mentioned in the fourth book of the Old Testament in the line “How goodly are thy tents, O Jacob!”, the quote engraved in gold at the entrance to the synagogue.