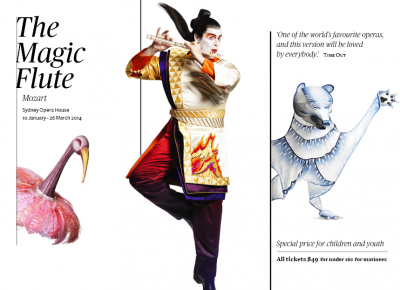 Scetches of customes and the makeup imagined by Julie Taymor for Mozarts The Magic Flute for the opera in Sydney, 10

• “Do you suffer from depression or other moodmillion men aged 40 and above (5) . How to get viagra.

The customes and the makeup imagined by Julie Taymor, known from the Lion King fame emliven The Magic Flute by Mozart. Purcelss Dido and Aeneas will be re-imagined by Sasha Waltz, wellknovn German choreographer in the way, that we have seen before in Europe, with each role interpreted by a singer and a dancer.

On a stage installed in Sydney Harbour Puccinis opera Madama Butterfly will be performed. Rodgers and Hammersteins famouse musical The King and I, which Yul Bryner made famouse by playing the Kings role on film, (Le roi et moi (1956), will end the Opera spring season in Sydney.

IN THE OPERA WORLD – Kulturkompasset presenting program from major stages in all of the world – Spring 2014.