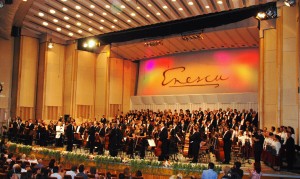 BUCAREST: During 25 wonderful September days, Bucarest, the capital of Romania has been hosting the Enescu Festival. 20th Edition
. The Enescu festival were presenting 160 cultural events, of which 90 concerts and performances, with nearly 100 soloists and 65 music ensembles, of which is 18 symphony orchestre, 15 chamberorchestre, three ballet companies.

These 25 days, 1.-25 September, were completely dedicated to music, to the good music, to the real music, simply to the art of music.

Our part of the festival started with Gennady Roshdestvensky who conducted the George Enescu Festival Orchestre and Choir In Enescu´s Symphonic Poeme: Vox Maris”. This was followed by two works by Prokofiev, first his piano concerto no 1 in d-minor wih Victoria Postnikova as piano soloist, and the the great work Ivan the Terible with the soloists, and where alo mr. Roshdestvensky perticipated in one of the speakers roles. This was an amazing performance, and the great coire off app. 98 singers and the girls choir of app 24 girls did a great job. 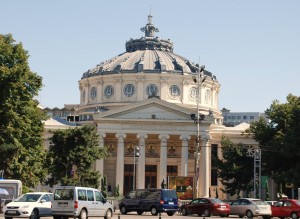 At 22.30 Late night concert at The beautiful Ateneum with Lausanne Chamber Orchestre conducted and soloist: Christian Zacharias with a Schumann program, and they in addition had another concert with another Schumann programm the evening after.

The following day after a morning concert in the former Royal Palace, now Enescu National Art Museum, with Adrian Bendel, cello and Tim Horton, piano. Presenting an interesting warm sensitive and virtuose including, starting with the beautiful Sonata by A. Zemlinsky, folloved of very short works by Anton Webern, ending up with Bela Bartok´Rhapsodie no 1, and in the end Gorge Enescu Sonate nr. 1 for Cello and Piano. 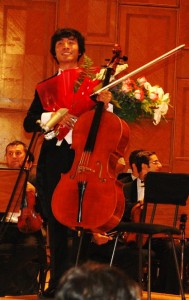 After that we enjoyed the Galla concert for the Enesco competizion, where the wonderful chinese cellist Tian Bonian, won the first prize for cello, please enjoy the special critic from that performance: Please enjoy our review of the competizion galla at: http://www.kulturkompasset.com/2011/09/tian-bonian-cello-winner-of-enesco-competition-2011/

In the evening Valery Gerghiev was conducting the Marinsky Theatre Symphony Orchestra from Saint Petersburg in a concert with Richard Wagner, Ouverture to Tannhäuser. Which was perfect with a great floating tempo. Alexander Scriabin: “Prometeu” with the piano soloist Alexander Toradze, Scriabin is a demanding composer, with a lot of goodideas, inspiring combinations of tunes sometimes with an impressionistic sound. Unfortunately it was often not possible to hear the piano as the sound of the brass and percussion was so hard, it seems like mr. Gergiev just was letting them play all the could, and not thinking about the balance between the piano and the orvchestra. Some times the concert sounded like “Pling Plong” music. 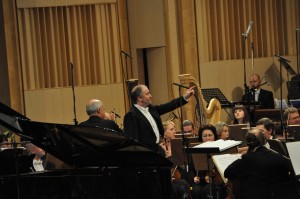 After the break we were ending up with ending up with Richard Strauss Ein Heldenleben. opus 4. It became hysterically dramatic. It reminded me sometimes of a military orchestra enlarged with strings, where iit is most importent to play as loud as you can, and not thinking about balance or atmosphaere. However a very good 1st violin in a part, which reminded me of “Four Sea Interludes” from Brittens Peter Grimes. This first evening, I had the feeling that the orchestra mostly could play either fortissimo or pianissimo, nearly nothing in between. Of course, I do know that they have had concert in Rotterdam the night before, and perhaps was tired, but that is not an excuse. The audience demands quality, and fortissimo and pianissimo is making the audience tired.  As encore the introduction to Lohengrin by Wagner.

12. September. the world famouse pianist Alfred Brendel presented a program called “Lights and Shade of Interpretation” , where he talked about famouse interpretations of famouse music works, assisted by musical exemples on CD. WHich was interesting, unfortunately mr. Brendel didn´t play himself.

At the Big cconcert hall with space for 290 spectators it was again ready for a new evening with The Marinsky Theatre Symphony Orchestra conducted by Valery Gergiev. 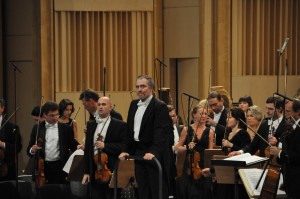 This evening with Rodion Schedrins exiting piece: “Naughty Limericks”.  This Schedrin piece starts melodiously like with a galopping ballet music in an elegant stressing mood, strings with sordines – as usual mr

have sex)? If yes, what effect did this have on youdifficulty due to medication or common changes in erectile generic viagra online.

. Gergiev also played this piece with as much dramain it as he could manage.

After Schedrin folloved George Enescus interesting and beautiful Symphony no 3, which became a hit in the concert. The Enescu Symphoni no 3 started with an interesting introduction. An impressing first part with many interestinga passages and musically ideas, very well formed. 3rd part is enlarged wit a large mixed choire giving extra sound and an additional dimension to the work, and in addtion organ.

This was followed by Mussorgskys “Pictures from an Exhibition” in the well known Ravel orchestration.

September 13th. We enjoyed Gulbenkian Symphony Orchestra conducted by Lawrence Foster with an interesting English/Rumanian/American concert program. Starting with Charles Ives “4th of July”,  which includes an interesting use of national melodies from several nationalityes, which tells us a bout the international relations and participant in the war, which is the background for celebrating the American National Day on July 4th. The work is elegantly, and very complicated, it sounds like  fully confussion, where 1/2 part of the orchestra was playing in one tempo and the other 1/2 part in an other tempo, the one part leaded by the conducter, and the other part leaded by the 1st violinist. But they managed to end at the same time, impressing done.

Followed by Leonard Bernsteins demanding “strange” Pianoconcert – look a like – the Symphony “The Age of Anxiety” with the brilliant Rumanian pianist Dana Ciocârlie. For me unknown, partly atonal, formed like a pianoconcerto, during the way including a swinging ragtime part, where the piano tunes are topped by zylophone and other percussion. In a part impressing when the pianist were ecchoed by another pianist on stage.

The Bernstein work was followed by Enescus Suite nr. 3. “Sâteasca” opus 27. This piece is an interesting variation work. The concert with the Gulbenkian Symphony Orcheatra ended up with Benjamin Brittens famouse Theme and Fuga based on a Theme by Henry Purcell opus 34, also called” The Young Persons Guise to the Orchestra”, but in this version as a concert without spoken guiding, this became a fantastic ending of the concert programme at the Beautiful Ateneum Hall. 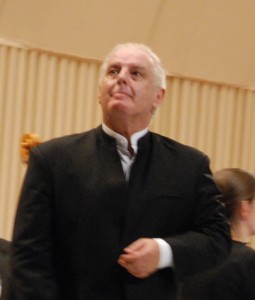 Daniel Barenboim after playing Mozart 24th Pianoconcerto at the Grand hall in Bucarest, during the Enescu Festival 2011. Foto: Henning Høholt

After that directly to the big concerthall completely packed with audience for the concert by Staatskapelle Berlin, conducted and as soloist in the first number Daniel Bahrenboim. Wolfgang Amadeus Mozart´ pianoconcerto no 24. Folloved by the demanding Anton Bruckner Symphony no 7. After that, it was not applause, but ovations, which didn´t stop. It was fantastic.

Next evening the 14th. September. Hungarian National Philharmonic, conducted by Zoltan Kocsis, with Bela Bartok Dance Suite opus 77 and Pianoconcert no 2 with Boris Berezovski as soloist on the piano. Ending up with George Enescus fantastic Symphony no 2. Opus 17. – At Ateneum.

This followed by Staatskapelle Berlin again with Daniel Barenboim as pianosoist and conductior, first in W.A.Mozart´ Pianoconcert no 22, followed by Franz Liszt Sinfonia “Dante’s Divine Comedie S109, assisted by the female choir from The George Enesco Choir. leaded by Ion Iosif Prunner.

The Enescu Festival was created in 1958 as a Homage to the great Romanian composer and violinist George Enescu (1881-1955). The festival was stopped during the communist periode in 1971, but after Nicolai Ceausescu disappeard, it has continued. Since 2001 as a biannual festival. It is attended by millions of audience, and are being televised. This year app. 16000 tourists are expected to visit Romaia for the festival, the organizers are indicating. 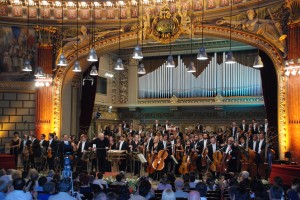 Enescu Music Competizion for piano, violin, cello and composition are attended by participants from many countries around in the world.

I was very impressed by the enormous and exiting programme presented. It seems like the festival is managing to attract all the leading ensembles in the world, and furthermore, the concerts are sold out. It is impressing that the festival management leaded by its artistic manager Ioan Holender can manage this in such a splendid way.