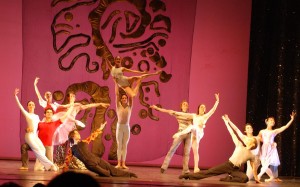 United Dance Company headed by Alexander Hoffmann is touring in Austria and Germany with a balletproduction called Breathless (Atemlos).

The wellcomposed program includes a combination of 15 different numbers, of them some new creations with new choreography by Sergei Upkin, who also is Balletmaster of the production. These number got a lot of positive attention from the audience: Jazz Suite nr. 2. to the musci by Dmitri Schostakowitsch, with delciouse costumes by Tomas Bagackas, who in the mood of the choreographers idea to make this ballet as an amusing flirt between soliders, officers and young girls, have designed elegant military costumes in silk for the male dancers and with embroidered lace and tullen dresses also in silk for the female dancers. It became a light spring summer flirt for the company, well maked. Furthermore by the same  choreographer/costumier, Caprice, to the music by Anton Rubinstein. A surprising meeting between the four brilliant dancers Mai Komori, Ville Mäki, Christina Tipirig and Ovidiu Chitanu, with an interesting ending where it is the two male dancers which is dancing together, and the girls are left alone. Again deliciouse light costumes by Tomas Bagackas
. 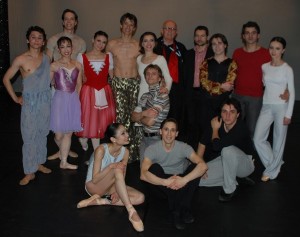 But it all opened with a presentation of all the dancers continuing with the young Rumanian star dancer Ovidiu Chitanu from the  balletcompany in Constanta, Russia dancing the popular Drummer solo to the music of Johann Strauss  choreographed by David Lichine.

Angel Touch choreographed by the talented Christina Uta to the music of J.S.Bach became a beautiful visual experience with the brilliant male dancer Christian Tarcea, again in costume by Tomas Bagackas.

The most touching ballet was Romeo and Julia choreographed by Radu Poklitaru, to Tschaikovskijs Romeo and Julia Ouverture, originally choreographed for a new years performance in 2009 in the Vilnius National Concerthouse with the Vilnius Philharmonic Orchestra conducted by Gintaras Rinkevicius.  Expressive and beautifully performed by Julia Dziatko and Konstantin Kusnetzov as Julia and Romeo, together with Christian Tarcea and Ovidiu Iancu as Tybalt and Mercutio.

Another highlight was David Dawsons neoclassical “Million Kisses to my skin” to the music by J.S.Bach. Deliciouse performed by Ville Mäki and Mai Komori.

. The amusing “Die Puppenfee” choreographed by Nikolai and Sergej Legat was charming performed by Miki Watanabe, Aliaksandre Buber and Ovidiu Iandcu. The last number of the program “Der Talisman” a demanding classical pas de deux performed by  Miki Watanabe (with a lot of graciusity), and Aliaksandre Buber (with brilliant jumps), before the finale with all 12 dancers participating.

The young Lithuanian/Norwegian costume and fashion designer TOMAS BAGACKAS is costumeresponsible for the production with United Dance Company, Paris, which was premiered in Austria April 28th 2011 and are touring in Austria and Germany.