Tristan and Isolde in Firenze 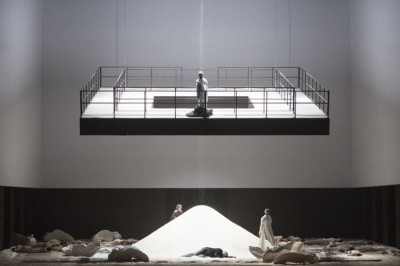 Firenze/Italy: Wagner’s Tristan und Isolde has opened the 77th Maggio Musicale Fiorentino Festival. The performance has been characterized by conductor Zubin Mehta with the essential collaboration of the wonderful Orchestra.

Zubin Mehta exalts the lyrical side of the score, extolling refinements and colours, athmospheres and coherence to libretto and plot. Seldom I’ve heard this Orchestra play in such a convincing way, perfectly according to conductor’s will. 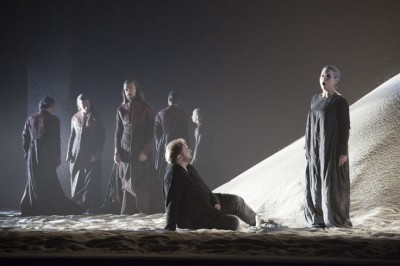 The opera starts in a sort of muted tone, almost the whole First Act is fragmentary and not quite convincing. Mehta starts to show his mastery from the Final of Act I, when King Marke arrives, and goes on with a great sorrowful partecipation in Second and Third Act. 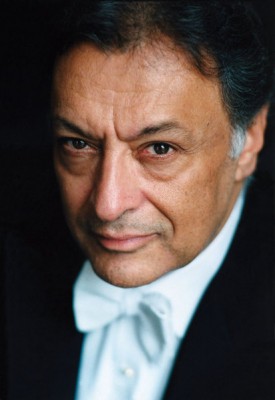 He spurs the orchestra with his beautiful gesture, helps the singers when in difficulties, extolls really beautiful colours and tones. Probably, and this is the only little reproach, all this goes to detriment of “theatricality” that in some moments could be more evident. But in the whole it has been a really convincing conducting.

The singers were of average level. Torsten Kerl was a lyric Tristan, without vocal uncertainties. His accent was monotonous, but regarding to the lenghth and difficulty of this character he got away with it in very well.

Lioba Braun was disappointing, with her unequal soprano showing neither amplitude nor a charming timbre. 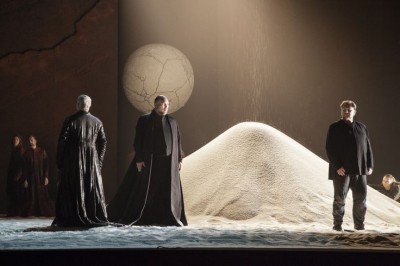 Stephen Milling was a splendid King Marke both scenically and vocally: a wonderful approach to this character with perfect adherence to the score.

Mezzo Julia Rutigliano was Brangäne, but her voice and her technique were insufficient, so she was rather disappointing.

The other singers were on an average level.

As said, Orchestra and Chorus were really in good shape and quite agreeing to Mehta‘s interpretation

– Psychosexual/couple therapy How long does cialis last? prevalence was moderate erectile dysfunction with a rate.

On the contrary the staging (created by Stefano Poda) was pretentious and too highbrow-style. There is only one scene, with little variations according to the various situations, with sand on the floor and sort of a waterfall in the middle of the stage but with no water coming out but rice (all the rice will be not thrown away but used to prepare dog-food, so we were told…). These rice-grains pouring out unceasingly during the lenght of the performance, probably symbolize the passing of time or the inevitability of human destiny. 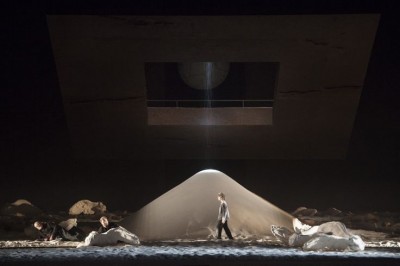 The almost only unic element of scenography is a platform forestage surrounding the rice fall, that can be lifted or lowered
. On the background a planet, or maybe the moon, variously lightened during the performance.

The acting of the singers and of mimes is very affected, the characters move often very slow, and frequently in profile like an Egyptian bas-relief. Costumes are average, while the light-designing is exceptional, very accurate almost at the edge of a technical narcissism.

The story is staged in a not defined time, and there are fine moments, such as the arrival of King Marke in the final First Act, but others are almost embarassing, like the duet in the Second Act, where Tristan and Isolde are standing completely motionless in the middle of the stage, with “doubles” going around them like in slow-motion. Moreover, there are also almost incomprehensible symbols and little statues inspired to Bocklin’s Deads Island. 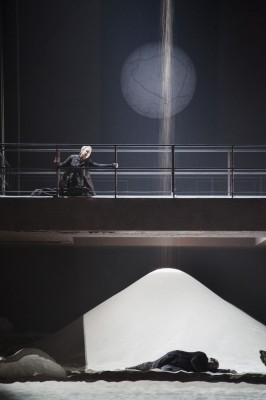 Some ensemble scenes were pleasant, but globally it was an unrealistic and disappointing staging, that in some moments made almost incomprehensible a simple and linear story like that of Tristan.

Unfortunately the House was only half full, but at the end the audience tributed very warm applause above all for the conductor.

OTHER TRISTAN AND ISOLDE REVIEWS at Kulturkompasset.

Please enjoy our reviews of Tristan and Isolde from other productions:

Claus Dreckers review from the Oslo production in 2012: http://www.kulturkompasset.com/2012/03/det-triste-ved-isolde/