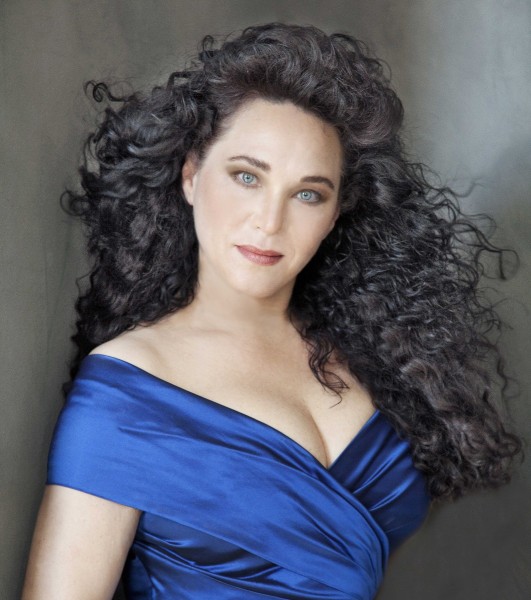 As one of the most brilliant interpreters of the dramatic soprano repertoire on the scene today, Elizabeth Blancke-Biggs began the 2014-2015 season in Willy Landin’s new production of Verdi’s La Traviata at Teatro Argentina de la Plata, for which she was awarded the Argentine Music Critics Association Award as “Discovery of the Year“.She was then in Mexico City for the Verdi Requiem under Carlos Miguel Prieto with the Orquesta Sinfonica Nacional
. This was followed by a Nabucco at the Operà National de Lorraine. February saw her at the Gala Concert of the Festival Alfonso Ortiz Tirado in Alamos, Mexico with tenor Giancarlo Monsalve, and Mo
. Enrique Patron de Rueda. Back in the USA, she appeared at Lincoln Center, N.Y. with the Riverside Choral Society in  the Rossini Stabat Mater, and the Dvorák Te Deum. In June, she was featured in a staged, concert production of Strauss’ Salome at Mexico City’s Palacio de Bellas Artes with Mo. Carlos Miguel Prieto, and Chris Merritt as Herodes.
The 2013 -14 season included a triumphant debut at the Grand Thèâtre de Genève in Verdi’s Nabucco, where she was hailed by the press as “simply extraordinary”. Earlier in the season she appeared as the guest soloist in four concerts celebrating the Verdi Bicentennial at Mexico City’s Palacio de Bellas Artes with the Sinfonica Nacional, and the Orchestra of OFUNAM. She then made her critically acclaimed role and house debut at Den Norske Opera as Strauss’ Salome in the Stefan Herheim production from Salzburg. A last minute call from Mo. Lorin Maazel brought her to his Castleton International Festival to perform Puccini’s La Fanciulla del West under his baton.  She then was off to Montevideo, Uruguay, to the Teatro Solis for Verdi’s Macbeth. She also recorded and released her first solo CD – Vaghissima  Sembianza – Arie di Stile Antico of Stefano Donaudy.
Hailed by Placido Domingo as one of the most outstanding young Verdi singers, she appeared with him at the Washington National Opera in Giordano’s Fedora. At the Metropolitan Opera, where she worked with Maestros James Levine, Gianandrea Noseda, Maurizio Benini, Christoph Eschenbach, Sir Andrew Davis, and Phillipe Augin, she made her  debut in Franco Zeffirelli’s production of Verdi’s La Traviata under the baton of Marcello Viotti, and returned there to sing the Sirius Satellite Radio Broadcast of Puccini’s Tosca with the tenor Marcello Giordani.
Her Italian debut was at the Teatro Regio di Torino in Jonathan Miller’s production of Donizetti’s Maria Stuarda conducted by Evelino Pidò, and she most recently was invited to star in the centennial production of Puccini’s La Fanciulla del West at Palermo’s Teatro Massimo with Maestro Bruno Bartoletti. She has sung not only this role, but also Bellini’s Norma at London’s Opera Holland Park, and the Palm Beach Opera. At the Florida Grand Opera she appeared in Fanciulla and Tosca, a role she also sang with The Compañía Lírica Nacionál and the Orquesta Nacional de Costa Rica, where she returns for Nabucco. She also appeared at the Teatro Municipal de Santiago, Chile in Verdi’s Nabucco. and Macbeth in Hugo DeAna’s production.  Other roles she has sung include Puccini heroines such as Georgetta in Il Tabarro, Suor Angelica, Mimi and Musetta in La Boheme, Liù in Turandot, and Verdi prima donnas such as Elvira in Ernani, Leonora in Il Trovatore, Elena in I Vespri Siciliani, Aida, and Desdemona in Otello,
She looks forward to returning to Den Norske Opera in Oslo for her role debut as Puccini’s Turandot, and then to Berlin’s Kommische Oper in that role in Barrie Kosky’s new production.
Tagged as: Andreas Homoki, Arturo Toscanini, Carlo Gozzi, Diego Torre, Elizabeth Blancke-Biggs, Franck Evin, Franco Alfano, Frauke Schernau, Giacomo Puccini, Giuseppe Adami, John Fiore, John Helmer Fiore, Opera, Renato Simoni, Semperoper Dresden, Stefan Herheim, Terje Boye Hansen, Wolfgang Gussmann