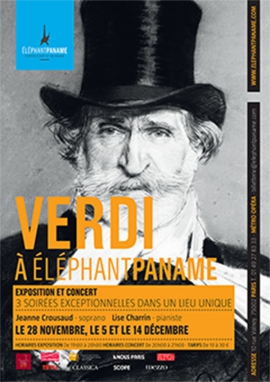 This year marks the 200th anniversary of the birth of Giuseppe Verdi, the most frequently performed opera composer. Many bicentenary events have been organised around the world in 2013 to celebrate Verdi’s life and work.

The deliciouse Gallery Eléphant Paname, just a few minutes from Opera Garnier is in its whole house presenting an extraordinary exposition celebrating Giuseppe Verdi´s 200 years jubilee.
It is only fitting and proper that the French capital should offer an ambitious and comprehensive tribute to this genius, who had many of his greatest successes in Milan and Paris, both home to famous temples of opera in the nineteenth century and since.

The aptly named Éléphant Paname has taken up this beautiful challenge
. Dedicated to culture and dance, this magnificent nineteenth-century jewel of a place, just steps from the Palais Garnier opera house, nourishes the romantic spirit in all its visitors. Laurent Fiat and Fanny Fiat, the two young co-founders and co-directors of this unique multi-arts centre, driven by their noble and far-reaching commitments as ardent lovers of culture, are thus giving Verdi a compelling homage, in a truly Parisian venue
.
Laurent and Fanny are especially pleased to be assisted in their endeavours by Franco Moretti, general director of the Fondazione Festival Pucciniano, but also Corrado Mingardi of the Museo Nazionale Giuseppe Verdi and the opera critic Elena Formica.

In recognition of this gratifying, yet demanding task, the aim of “Verdi at Éléphant Paname” is to expand understanding of this composer who dominated nineteenth-century Romantic opera, bringing Italian melodrama to its zenith, through portraits, manuscripts and other documents as well as performance excerpts.

The exhibition seeks to capture the diversity and contradictions of Verdi’s genius. His personality is clearly one that must be explored in all its strength of character

. Verdi was a figure deeply rooted in his native land who created works of unparalleled dramatic power. Therefore, in order to truly understand Verdi and his music, one must allow oneself to be swept away by theatrical illusion. By adopting this concept, the exhibition invites visitors to experience the play-within-a-play aspects tying together Verdi’s life and his body of work, musical compositions that stage the drama of human passions and emotions with unprecedented force, retaining a universal, timeless appeal.

Painted and sculpted portraits of Verdi, stage costumes and props, set designs, sketches of costumes, first-edition libretti, original manuscripts, letters, reproductions of posters, filmed excerpts of operas, arias and scenes, interviews with experts in the field and opera connoisseurs, explanatory texts, quotations by the Maestro – all of these elements are among those offered to illustrate in a lively and comprehensive fashion the theme of this fascinating exhibition
.

About the exposition Verdi at Eléphant Paname

I discovered Verdi, Puccini and Italian opera during a year spent studying Italian Renaissance painting in Florence. My entire time there glided by to the strains of opera, which has left a lasting impression and often serves for me as a source of inspiration. In 2013, the world celebrates the 200th anniversary of Verdi’s birth. I knew immediately this would be the ideal opportunity to pay homage to him, while also reconnecting with my formative experience in Florence.

In 2010, my sister Fanny Fiat and I were introduced by a mutual friend to Franco Moretti, general manager of the Puccini Festival in Torre del Lago. Interested in adding dance shows to the bill at the festival, he extended an invitation to Compagnie Julien Lestel, with whom my sister danced. An appearance was scheduled for 2011, which was a huge success! We have kept up close ties with Mr. Moretti ever since.

When we conceived the idea of presenting a Verdi exhibition, it was entirely natural for us to ask Mr. Moretti to help us with this project, as a leading Italian opera specialist and a man of great sensitivity and intelligence. Upon hearing of our plans, he immediately shared his enthusiasm, accepting our invitation to serve as the exhibition’s coordinator. It is thanks to his efforts that we are able to present such an exceptional collection of objects relating to Verdi. Without Franco Moretti’s invaluable assistance, this exhibition would never have taken the impressive shape it has today
.