VIENNA/AUSTRIA: Approximately 50 operas and 20 ballets are offered in the repertoire every season, which runs from 1 September to 30 June. For the time being the Operachief is Dominique Meyer, who for nearly two decades has been chief of Théâtre des Champs Élysées in Paris and the Balletchief is Manuel Legris.

It is not, however, the number of different productions which is important (although it is not equaled by any other opera house in the world) rather the variety offered by this House and all at the highest levels of artistry. An artistic corner stone of the house is the permanently engaged ensemble of singers, always complemented by international guest singers

. Where lately, two Norwegian star sopranos, Marita Sølvberg has made her Vienna debut as Mimi, and Mari Eriksmoen as Zerbinetta.

A great number of world stars have come from among the members of the Wiener Staatsoper ensemble. General Director Ioan Holender has discovered for the Wiener Staatsoper, and thereby for the international music world, a large number of young singers such as Natalie Dessay Barbara Frittoli, Angela Gheorghiu, Vesselina Kasarova, Angelika Kirchschlager, Andrea Rost, Michael Schade, Bo Skovhus, Bryn Terfel and Ramón Vargas.

A further fact: the members of the Wiener Philhamoniker orchestra are recruited from the Wiener Staatsoper orchestra. It can be said in Vienna and elsewhere without false modesty that this world renowned orchestra is the best opera orchestra in the world. Back stage over 250 technical employees work from early in the morning though the night in order to prepare the daily change of performance.

The Wiener Staatsoper is the epitome of Austrian musical tradition and as a result the symbol for this relatively small, although disproportionately culturally present nation. This reputation was not least built through guest appearances overseas which have all the allure of a state visit. The first tour abroad (to France in 1947) caused a Parisian critic to write: ‘How rich is this poor Austria’. During the tour to Japan in 1994, overall the fourth guest appearance by the Staatsoper, performances were given of LE NOZZE DI FIGARO and BORIS GODUNOW under Claudio Abbado, DER ROSENKAVALIER under Carlos Kleiber as well as DIE FLEDERMAUS under Ulf Schirmer in Tokyo. 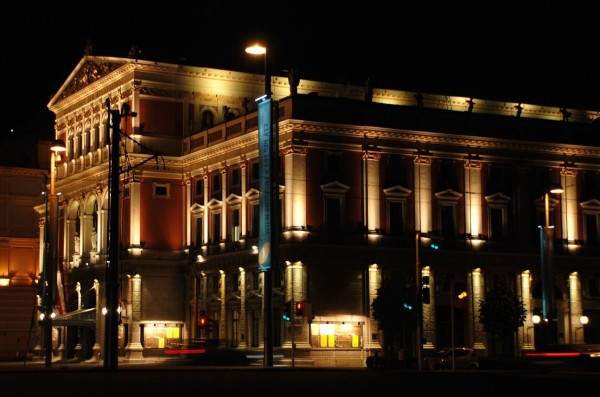 In addition, guest appearances in Ravenna in July 1996 of COSÌ FAN TUTTE under Riccardo Muti and the most recent tour in the autumn of 2000, once again to Japan, with three productions in total (ARIADNE AUF NAXOS: with Edita Gruberova as Zerbinetta and Agnes Baltsa as Komoponist under Giuseppe Sinopoli; DIE LUSTIGE WITWE: with Thomas Hampson as Danilo and Angelika Kirchschlager as Valencienne under Jun Märkl; LINDA DI CHAMOUNIX: with Edita Gruberova as Linda and Thomas Hampson as Antonio under Bruno Campanella) confirmed the international ambassadorial role of the Staatsoper.

Looking at the building from the Opernring, in other words from the front, the historical part from the original 1869 building is visible. The façade remains in Renaissance arched style and the loggia on the Ringstrasse side underline the public character of the building.

The two representations of riders over the main façade of the loggia were erected in 1876. They were created by Ernst Julius Hähnel and represent two flying horses, illustrating Harmony and the muse of poetry (Erato).

Also by Hähnel are the five bronze statues (from left to right: Heroism, the Songstress, Fantasy, Thalia and Love) which stand on pedestals inside the arched loggia arcade.

In our reportage from Viener State Opera, we are pleased to use official information and photo materiale from the State Operas press office.

On the first half-landing of the celebratory stairway, to the side of the main entrance to the Parterre boxes, two medallions designed by the sculptor Josef Cesar are displayed featuring portraits of the architects August Sicard von Sicardsburg and Eduard van der Nüll. Overhead can be seen two high relief pictures by Johann Preleuthner, symbolizing the ‘Ballet’ and the ‘Opera’. A special embellishment of the stairwell is the ceiling painting ‘Fortune spreading her gifts’ after a design by Franz Dobiaschofsky. Also by him are the three canvas wall paintings representing ballet, and comic and tragic opera. The seven allegorical statues designed by Joseph Gasser which line the celebratory stairway represent the seven free arts (architecture, sculpture, poetry, dance, music, theatre and painting). They were retrieved unharmed during the last days of the war. The two large mirrors seen here were also miraculously unharmed.

Through an opening in the wall the Gustav Mahler Hall is linked to the original remaining foyer (in earlier times called the ‘Promenade Hall’). Sixteen oil paintings after sketches by Moritz von Schwind explain why this magnificent hall has the nick-name ‘Schwindfoyer’. The paintings portray once well known, but today hardly ever performed, works from the operatic repertoire as well as one concert piece.

Under each painting is the bust of the corresponding composer
. The ceiling is decorated with two paintings “Battle of the Wreath” and “Victory” by Friedrich Sturm (he also created the twelve flower decorations on the walls). Medallions of the Empress Maria Theresia and the Emperor Leopold I, who contributed several notable works he composed himself to the young art form, can be seen over each of the marble fireplaces. In addition the busts of some significant Staatsoper General Directors are found.

The showpiece of the historical section is the Tea Salon (formerly the Emperor Salon), located between the celebratory stairwell and the Middle Box. The former Court box, as well as the Tea Salon were formerly reserved for use by the Court. The entrance to the Court box incidentally marks the border of the 1945 fire. The Tea Salon is still today not always accessible as it is used for production meetings, conferences, awards ceremonies, receptions and so on. The ceiling painting by Karl Madjera (Music on the eagle’s wings) with representations of lyric and tragic music on both sides, has retained its vibrant colours. The ceiling and walls are adorned with 22 carat gold leaf. Also of interest are the sculptures by August La Ligne, wall embroideries from the workshop Giani and tapestries featuring the initials of Franz Joseph I.

Today the Middle Box is accessible to the public. It gives an impressive view of the horseshoe shaped auditorium, which had to be completely rebuilt after the Second World War. The re-building of the auditorium, new stairways to the former 3rd gallery, all the public cloak rooms and the interval rooms in the upper levels were entrusted to Erich Boltenstern, Professor at the technical college and at the Academy for the plastic arts in Vienna, as the result of a competition. The architects Otto Prossinger, Ceno Kosak and Felix Cevela designed the interval rooms on the 1st level. The basic Italian theatre design, with three box levels and two open levels (balcony and gallery) was maintained, according to the plans of Sicardsburg and van der Nüll. Boltenstern limited his changes to slightly lifting the 3rd gallery (today the Balcony). The columns on the 3rd and 4th gallery levels were eliminated as there was no longer any structural need for them. In their place a free floating ceiling construction was chosen which dramatically improved sightlines.

From the original capacity of the auditorium, which was 2,881 places, only 2,282 places remain (of which 1,709 are sitting, 567 are standing, 4 are wheelchair, and 4 are accompanying places). The reduction in the number was necessary due to stricter building, fire and safety regulations. The front of the boxes, constructed from reinforced concrete, were covered with wood for acoustical reasons (the acoustics of this Vienna opera house is of unequalled brilliance). The number of access doors to the hall was increased and handicapped access improved. Some of the upper level seats with obstructed view were equipped with lights for reading.

The traditional red-gold-ivory colours of the auditorium were maintained, but the sumptuous interior was replaced by a timeless classic design. Paintings, reliefs, and columns no longer decorate the auditorium and for safety reasons the large centre chandelier was replaced by a lighting wreath made from crystal. This lighting fixture weighs 3,000 kilograms and contains 1,100 light bulbs. This fixture has a diameter of 7 meters, is 5 meters high and has access for a lighting technician to carry our maintenance work on the lighting wreath.

Prof. Rudolf Eisenmenger designed the so called iron curtain which separates the auditorium from the stage. It displays a scene from Gluck’s opera ‘Orpheus and Eurydice’. In early 1998 the firm Museum in Progress was entrusted with the creation of a series of 5 large, temporary paintings for the Staatsoper —one for each season. The realization and attaching of the pictures takes place using a specially developed process so that both the Eisenmenger picture, as well as the new work, are guaranteed to be conserved in optimal condition. With the creation of an exhibition room in the Wiener Staatsoper this historical building assumes its responsibility towards contemporary artistic developments.

Every evening the orchestra pit accommodates the musicians of possibly the world’s best known ensemble. The Wiener Philharmoniker orchestra members are recruited from the members of the Staatsoper orchestra. The orchestra pit is 123 m2 can hold around 110 musicians. It is fitted with an adjustable floor so that the height can be varied. The purpose of this is to achieve acoustical effects and to make possible the use of the front stage when fewer musicians are needed in the orchestra pit.

The entire building is fitted with a seemingly old-fashioned, but effective climate control. Fresh air from the nearby city park is sucked in through an underground tunnel. In winter the air is warmed and in the warmer seasons the air is blown over ice blocks (which are incidentally made in the House) thereby cooling the air. The opera like the Burgtheater, is district heated. 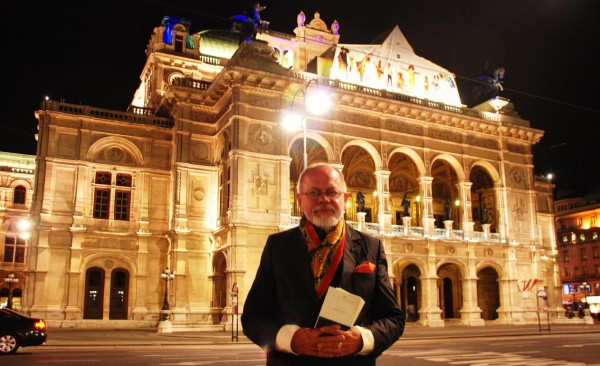 Three iron curtains serve as security in case of fire: the main curtain which divides the stage from the auditorium and two further curtains which can be closed on the side and back stages. Above all the construction of the new part of the house was done with the utmost safety in mind: the former wood ceiling was replaced by one made from reinforced concrete. Instead of the former slate roof with wooden shingles in between there is now a fire, water and windproof copper skin—thereby finally fulfilling a wish of the architect van der Nüll—on a thin reinforced concrete shell. On the roof a public terrace was created, which serves not only an additional escape route but also as an ideal interval space for the warmer times of the year. Since September 1999 this large terrace accommodates the Mobilkom tent for children—a theatre on top of a theatre.