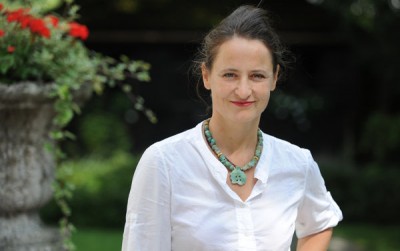 BERLIN/GERMANY: The world famouse choreographer, Sasha Waltz, who also, as other contemporary choreographers, has started in the opera business by staging her first Wagner opera production, Tannhäuser for Deutsche Staatsoper in Berlin. Premiere during Daniel Barenboim´s annual “Festtage” which opened Saturday April 13th, and runs through April 27th.

She deals with a starcast of some of the best Wagnerian singers to day: Peter Seiffert in the titelrole, Réne Pape  as Landgraf and Petter Mattei as Wolfram, Ann Petersen sings Elisabeth, and Marina Prudenskayaas Venus.

Ms. Waltz, had earlier staged as choreographic opera Purcell´s “Dido and Aeneas” premiered at the Staatsoper in 2005. Among othe opera productions
. But she has also experience working with text and large choral numbers, citing her execution of  Romeo and Juliet by Hector Berlioz at Opera de Paris in 2007. And that is one of the reasons for that Daniel Bareboim has engaged Ms. Waltz for Tannhäuser.

. Barenboim said about her work with the Berlioz work: “It´s a sort of mulidimensional creation. The story is told by the orchestra, there is no Romeo and no Juliette, which was for tha time extraordinar modern. I thought she ealt with that emarkably well, and I think Tannhäuser could lend itself to this kind of treatment. It will not be a conventional statement.”  Mr. Barenboim added: “It is importent to keep an artist of her stature in Berlin. That she feels this is her artistic home” and he added that he was glad to present Ms. Waltz work at the Staatsoper in Berlin.

Still that Mr. Barenboim will conduct from the original version of the composer´s score, first shown in 1845 at Dresden Court Opera, he has to Ms. Waltz request included the opera´s dance interlude which Wagner added for the Paris opening in 1861, it is a Bachanal on the Venusberg following the ouverture.

Ms Waltz has choosen to set the story in the 1950´s. She casts Tannhäuser as a kind of Renaissance man, who anticipates the sexual revolution of the following decade. She make referance to the postwar architecture of the Schiler Theatre, where the Staatsoper is performing temporarily while their real home on Unter den Linden is being renovated.

Saha Waltz & Guests was founded more than 20 years ago, and has been giving audience fantastic dance experiences. From Berlin to St. Petersburg, Paris, Sydney and Oslo, where she visited Lise Nordals CODA; Oslo Contemporary Dance Festival three times first time in 2005 with the wonderful Körper at Det Norske Teatret. In 2007 with Impromptus, and third time in 2013 with Gefaltet.

The Berlin-based choreographer Sasha Waltz  founded in 1993 Sasha Walz & Guests in Berlin together with Jochen Sand. From 2000 to 2005 she was part of the artistic management of the Schaubühne am Lehniner Platz Berlin there including her great classic Körper began.

She has worked with older and new music in the opera by Purcell Dido & Aeneas , Hosokawa ‘s Matsukaze , Dusapin ‘s Passion , and in May this year at the Mariinsky Theatre in St. Petersburg with the notion Sacre . Sasha Waltz has created a series of sensational performances on the international dance arena , and she is one of the most influential choreographers in Germany today .