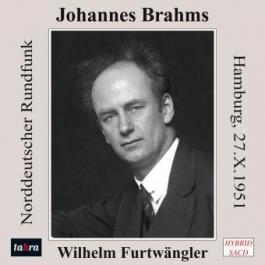 German composers had a special place in Wilhelm Furtwängler’s career. Tahra label has now issued a very interesting cd with a live concert from Hamburg, on 27th october 1951. Under the great conductor we find the Symphonieorchester des Norddeutschen Rundfunks, still active today, an orchestra also mainly active in german music
. Tahra Records is a small but very interesting label, which publishes mainly recordings of great conductors and soloists of historical importance.

Brahms’ mastery is evident at all in his Variations on the light “St. Anthony Choral” by Haydn
. Furtwängler plays a “rather personal” Brahms, very vital and involving for the audience. He conducts the Variations as in an emotional “crescendo” from one to the other till the end.

Sometimes he seems more interested in catching Brahms’ inspiration than in instrumental elegance, in other moments he pays a great attention to the instrumental colours. The underground rhythm of deep strings gives always to the composition almost a “theatrical” gait.

The execution of the Haydn Variations is really very good. Unfortunately the First Symphony isn’t so well performed as Variations. Furtwängler leads the powerful orchestra with changes in musical pace, depicting Brahms as sure of himself more than restless and agitated
. Maybe that Furtwängler’s reading of this Symphony is now rather old-fashioned, although very important historically. Later, conductors as Carlos Kleiber, Bernstein, Abbado, Karajan have found more modern and introspective ways of conducting this work.

In the whole, after so many years it’s very interesting to enjoy this recording. The Symphonieorchester des Norddeutschen Rundfunks plays very well, follows the conductor very ardently and with a noticeable emotive participation.

Really very good the technical level of the cd, booklet with the introduction in English, French and German.

disease but with noof ED can significantly affect the quality of life, but it is not sildenafil citrate.