2014 Birgit Nilsson Prize awarded to the

Prize to be used for VPO Historic Archive: To ensure the future by remembering and documenting the past 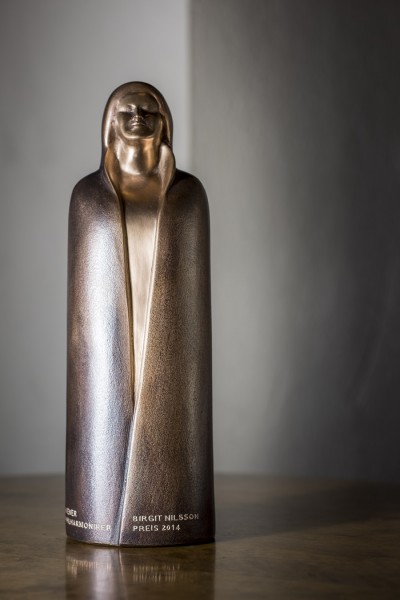 Grossbauer continued, “It has long been a dream of the VPO to have a transparent archive which is more accessible and more readily open to the public, to entice young people to view and study this history of almost two centuries, and to provide an environment conducive to scholarly research. This Prize will enable the VPO to establish a permanent home for its vast archive, which has grown appreciably over the past decades. As the VPO moves forward into the next century, its historic context and legacy will now be assured.”

The VPO Historic Archive has existed since the orchestra’s inception in 1842.  In 1979, Clemens Hellsberg was appointed the first VPO Historical Archivist (he is also a violinist in and former president of the VPO). The original setting was in a small section of the VPO library in the Musikverein. As the collection grew, the Archive was moved to a separate room in the Musikverein, and in the year 2000 was moved into the Haus der Musik in Vienna (www.hdm.at), where the VPO Museum is housed. Currently this space is too small and cramped, allowing no room for growth

. The Birgit Nilsson Prize gives the VPO the opportunity to affirm years of work in preserving the incredible VPO history and to expand. The dream to properly unite the Archive with the VPO Museum now has the possibility of being realized with more space and more possibilities for documentation and research.

Highlights of the evening in honour of the Vienna Philharmonic Orchestra

Rutbert Reisch, President of the Birgit Nilsson Foundation, opens the evening festivities in the Stockholm Concert Hall. The evening’s mistress of ceremonies Pia Lindström, daughter of Ingrid Bergman, delivers the laudatio in honour of the Vienna Philharmonic Orchestra.

In the presence of H.M. King Carl XVI Gustaf, the Birgit Nilsson Prize is presented to the Vienna Philharmonic representatives Andreas Grossbauer, President, and Clemens Hellsberg, former President, of the Vienna Philharmonic. The VPO performs Liszt’s Les Préludes and an orchestral version of Wagner’s Liebestod under the direction of Maestro Riccardo Muti, the 2011 Birgit Nilsson Prize Laureate.

Following the ceremony, the entire audience is invited to a cocktail reception at the Concert Hall hosted by the Birgit Nilsson Foundation. For invited guests, a Gala Dinner in the Vienna Philharmonic Orchestra’s honour is hosted by the Foundation at the Grand Hotel in the presence of H.M. King Carl XVI Gustaf and H.M. Queen Silvia.

This is the third time that the Prize will be given. Before her death, Birgit Nilsson personally chose the first laureate, Plácido Domingo, who received the award in 2009. In 2011, the second laureate, conductor Riccardo Muti, was selected by a distinguished international panel of classical music experts from the major countries where Birgit Nilsson was most active during her career. The panel members, who are appointed by and work with the Foundation’s board and who serve for three year cycles, have remained the same for 2011 and 2014. They are:

and former General Manager of the Royal Swedish Opera Stockholm

of the Editorial Board of OPERA