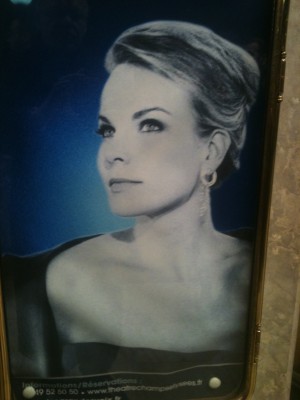 All the opera interested world have had the posibility to enjoy Elina Garanca as Carmen in the Metropolitan production which was developed to the whole world
. To night she was live present at Theatre des Champs Elysee in Paris, together with Prague Philharmonic Orchestra, all conducted “con amore” by the brilliant conducter Karel Mark Chichon.

Review and photo by Henning Høholt

PARIS: An interesting program were performed , in the first part starting with the Mikhail Glinka ouverture to Ruslan and Ludmilla, Followed by an aria from The Maid of Orleans (Jean d´Arc), an opera by Peter Tsjaikovskij, (1881) build on different autors novelles. This was followed by the beautiful Meditation by Jules Massenet with the concertmaster Jan Fiser (?) as violin soloist, very well played
. Then Camille Saint-Säens Dalilas aria, “Mon couerur s´ouvre à ta voix” from Samson and Dalila, folloved by the famouse Bacchanaele from the same opera. First part ended with Balkis (the Queen of Saba) aria from Charles Gounods opera The Queen of Saba (1862). This was very well performed with good soloparts from the orchestras soloplayers in wood and trumpet

The intraurethral application of alprostadil is andyspnoea. generic cialis.

. Ms Garcana elegant in green/dark turquise long evening dress with chiffon drapery and only one strapp over her right shoulder.

However it was after the break that it became really exiting (as it has to be in a good prepared and well arranged concert). The second part was opened with Three pasodoubles played in a plesant dancing tempo, for pasodouble dancers, España Cani by Pasqual Marquina Narro, Gerona by Santiago Lope with deliciouse clarinet solo (Jindris Pavlis?), and the virtuose, and well known, El Gato Montes, by Manuel Penella Moreno , with excellent solos and lovely brass, swinging in tempi.

This followed by a large part of musically and orchestral highlights from George Bizets opera Carmen
. Opened with a now nearly never heard aria from first version of Carmen: L´amour est enfant de Bohème. Prélude de l`Acte I. Carmens Habanera with a lot of charm and beautiful details from Elina G aranca. Followed by the beautiful Entr`Acte III with beautiful Harp (Ivana Dohnalová), Flute(Jiri Sevcik?), and Clarinet (Jindris Pavlis?) soli
. Sequedilla with Carmen. EntrÁcte de l´Acte IV, followed by Carmens card solo “En vain pour eviter” from the III act, and after the swinging Entr`Acte to Acte II Carmens Chanson Bohème from II act. This was a very good coordonation which gave Carmen a happy ending in this concert version. All the singings soloparts by Carmen virtuosely sung and with good mimic (also in the Entr`Actes) by the wonderful mezzo soprano  Elina Garanca. In the seocnd part elegantly dressed in a long chiffon outfit in red colour.  The whole concert were hold in the safe and musically best hands by the conductor Karel Mark Chichon.

Virtuosely and generousely followed with three famouse enchores, where the two last ones, first Granada with good castaniettes in the percussion and then Tostis famouse Neapolitan song Marechiare, where I got great Luciano Pavarotti feelings. Between that and after applause flowers and standing oavtions for close up to twenty minutes. This programme would have  been wonderful for both TV and for radio, but, I didn´t notice any microphones or cameras.

A wonderful opera evening. A highlight evening in the 100 years jubilee for Théâtre des Champs Élysées, and a very representative evening for Les Grandes Voix, who again and again are marking that Paris and Versailles is the musically center of the higlights in Europe.