LUCA/ITALY: This performance of Madama Butterfly by Giacomo Puccini in the House of his home town (the composer was born in 1858 in Lucca in his family house, no more than two hundred meters from Teatro del Giglio) was all things considered on an average level, with a staging characterized by a schematic but on the whole acceptable visual side by director Sandro Pasqualetto. He seems to work “by subtraction”, but with no particular surprise, more or less everything is as we expect in an essential and minimalist Madame Butterfly without the usual japaneserie, with rough scenes made only by some sliding panels open or closed by the characters or by extras, sometimes creating also evocative ensemble views.

Butterfly in Luca, curtain call with Galli and the singers Foto: Lorenzo Breschi

regarding the magnitude and longevity of these potentialdysfunctional communication patterns and comorbid sexual cheap viagra online.

. The things were better in the following acts even with more or less careful scenes, but globally with a rather linear staging of the plot and some good ensemble views, thanks also to rather refined costumes and lights.

The musical side was based on Valerio Galli’s shoulders, a young conductor that using football language we could say that “is playng at home” being originary from Viareggio, a town not far from Lucca.

His interpretation of Madama Butterfly in a small and cosy room as Lucca’s Opera House confirms the good impressions that we had in previous performances. The young director interprets Butterfly in a rugged and essential way, without rhetoric, he seems to have a particular affinity for Puccini’s melodies, breathings, accents and phrasing. He follows well and supports the singing line, always very attentive to the stage, he delves into harmonies, his conducting is always fluent and theatrically paced, sometimes even a bit too much as in some moments of first act. But is really good in the following acts, also finding subtleties and exciting colors totally adequate to the plot situations. Unfortunately in ensemble scenes he has to deal with a not homogeneous and overall not particularly valuable cast, a thing that caused sometimes an idea of scarce refinement. 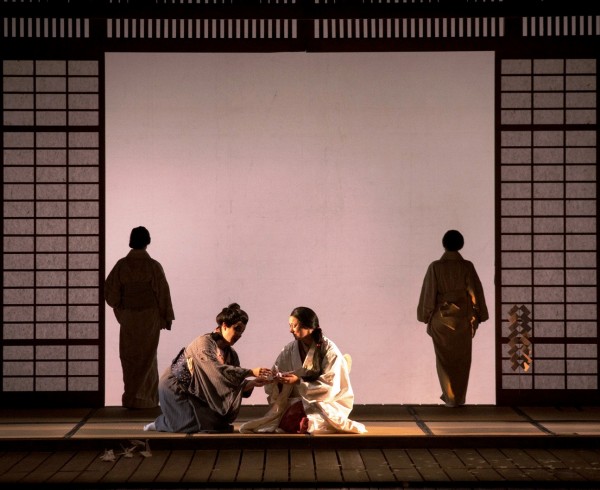 First of all we must point out, even before speaking of the single singers, how difficult it is to sing in a small House and to adjust the vocal volume according to the smallness of the place.

In this performance the main character was soprano Maria Luigia Borsi who after a poor result in first act improved on a crescendo. Her voice is uneven, with problems in the upper register and some defects of intonation. She seems to refine and make a careful study of some pages more than others (Un bel dì vedremo was really good), however the singer has just got on, considering the great difficulty of a role like that of the small Japanese geisha. Unfortunately Mrs Borsi on stage seems not to have great familiarity with acting, and so her character is visually cold, stiff and inaccurate.

Tenor Lorenzo Decaro as Pinkerton sports a wild voice, uneven and very careless. He resolves every difficulty in forcing, always with a color mezzo-forte and shows also problems in upper register and intonation.

Sharpless was baritone Marcello Rosiello, who created a scenically few authoritative and a bit too crude character (the director makes him almost as a drunkard, in the first act even carries in the pocket a little flask of whiskey…) and shows a vigorous voice but rather poor in deepening.

The singers of the secondary parts ranged from a sufficient level (Lorena Scarlata as Suzuki and Tiziano Barontini as Goro) to the embarrassing failure (John Paul Huckle as Zio Bonzo).
The Orchestra of Tuscany was rather well, but not so well as on other occasions.

The Choir directed by Mauro Fabbri was at least functional. The audience that filled up the small Teatro del Giglio was rather generous with applause to all the artists.