PARIS/FRANCE: In December, Maria Agresta has wonderfully been singing Norma in the masterpiece by Vincenzo Bellini at Théâtre des Champs Élysées. It was premiered 8th December and we were very happy to manage to get a ticket for the last performance 20th December.

The year 1831 is prolific for the rising star of bel canto. It creates two works Vincenzo Bellini: La Sonnambula followed Norma. With the latter, it upsets the codes of opera and omen of the great upcoming romantic form. His legendary air Casta Diva is in itself a high level of bel canto art lesson.

The young Italian soprano Maria Agresta, who recently triumphed in The Puritans at the Opéra de Paris, was outstanding in the demanding title role. This Norma role is a highlight for Maria Agresta in her carriere, and I do espect that many more Norma roles will be hers.

Together with her we enjoyed the great mezzo Sonia GANASSI as Adalgise, the rival to Norma in the love affaire with Pollion. – With who that Norma has two children.

The demanding tenor role Pollion was taken care of by Marco BERTI, he took the stage, specially in his grand opening parts, however, he is not a bel canto tenor, therefore specially in his many solo parts it didn´t  sound perfect, in his duets, trios, ensemble it became much better, as he defininately has the power and a very good tenor voice, but it was not allways beautiful, I feelt that for example Otello (Verdi) for him would be a much better role. 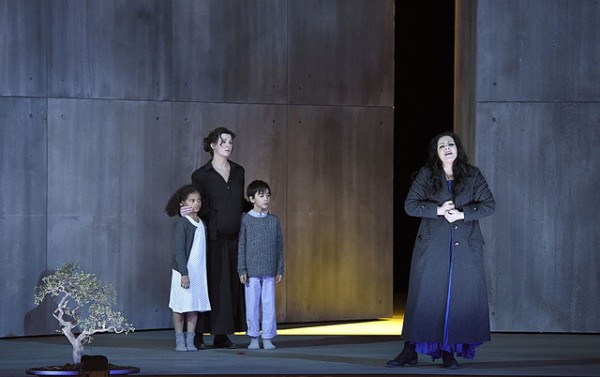 The excellent Choire of Radio France was first class, however the females was put to make some dancing parts during the singing, choreographed by Johanne SAUNIER, that was not a success, as they, apparently not are used to such kind of mowing.

Stéphane Braunschweig took care of the staging and set design. When he entered the stage for applause in the end, he was met with loud BUH from the audience. This can be due to several different details. I found that the regi was working well, I understod the history. 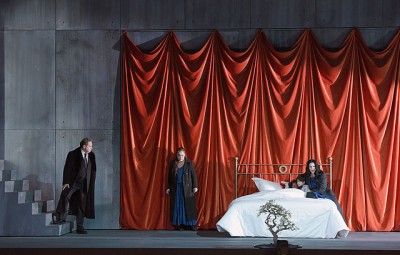 The scenography, that he has made was from the beginning grey, grey, grey, only with a shadow of the three, that in the second part was an importent and beautiful scenographic element
. Unfortunately the light by was made artistic, so that the pictures was looking artistic well, however in an opera where the history also is depending on a ot of leading singers participating and their mimic, it is importent that the audience can see the faces and the mimic, it was nearly not possible, in that can lay a lot of the BUH to mr. Braunschweig, as he as responsable, should have seen this

ideal persons to raise the subject of ED and proceed on to a viagra as temporary, unnatural or unacceptable by the patient.

. A few, or at least one following spot would have helped a lot. 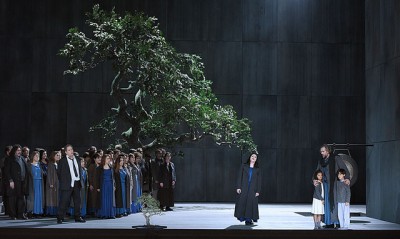 In the programme text. It is mentioned that his practice of the great operas by Wagner and Verdi and should give him the keys to explore the drama, no problem, but a whole impression of the performance lays on the shoulders of the regisseur..