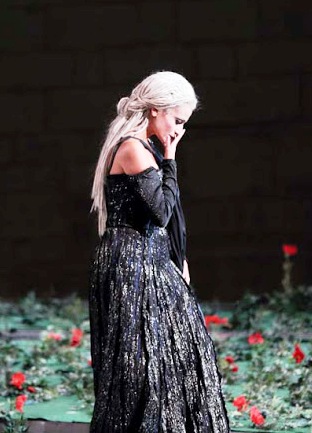 MARTINA FRANCA/ITALY: Puglia is one of the most beautiful regions of southern Italy, some call it ‘Tuscany of the south’ for its richness in history, monuments, historic urban centers, landscape and sea costs. In one of Puglia’s most evocative small towns, the all-white baroque Martina Franca, takes place every summer the Festival della Valle d’Itria, now at its 41° edition, mainly devoted to Bel Canto, and specially to rare operas never or only seldom performed in the centuries. 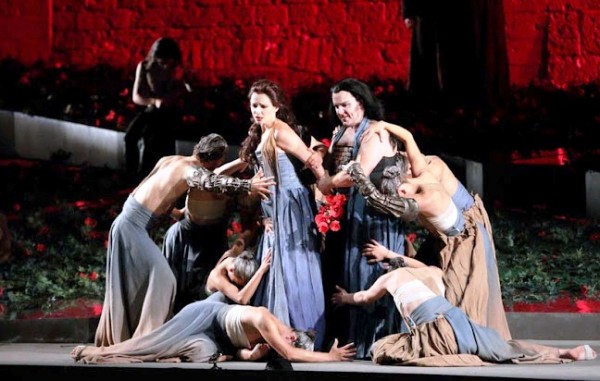 One of its most famous achievement for instance was the staging, in the 1970s, of Bellini’s Norma with the original voices’ assignement: Norma as a soprano Falcon, or a mezzo (Grace Bumbry in that occasion) and Adalgisa as a light lyrical soprano (Lella Cuberli).

This year’s most appealing venue was Medea in Corinto opera written by the German composer Giovanni Simone Mayr in 1813.

Born in Germany Mayr was active specially in northern Italy in the city of Bergamo, but Naples’ Teatro San Carlo, then under the legendary impresario Domenico Barbaja, staged many of his operas and in 1813 asked him to compose a new one. Together with librettist Felice Romani (the same of Bellini’s Norma) they chose as subject the myth of Medea, referring to the example of Cherubini, whose opera had triumphed in Paris. 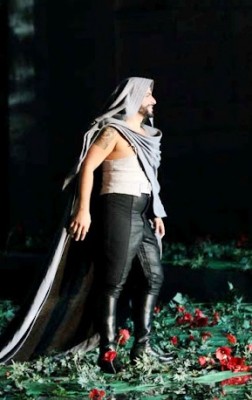 The premiere had what we would call today a ‘all stars cast’, guided by legendary Isabella Colbran, later wife of Gioacchino Rossini, and was a big success. In the following years the work was staged again in Italy and in Europe, and in London not less than Giuditta Pasta took the main role.

Then the opera was slowly forgotten until the 1970s when in the same Teatro San Carlo it had a revival with Turkish soprano Leyla Gencer. In most recent years we remember a recording from the label ‘Opera Rara’ and another reprise in Munich in 2010
.

‘Medea in Corinto‘ deserves to be best known to the audiences: it’s a fine opera, with high class music and very effective dramatically
. The plot is from the traditional myth: Medea after having given birth to two sons from Giasone is abandoned by him who wants to marry Creusa. As a revenge she kills her two sons and Creusa herself.

There are many signs of originality and modernity in Mayor’s writing: the shortness of recitatives, which have a strong theatrical accent and are instrumented and not in’secco’ style (only with harpsichord). 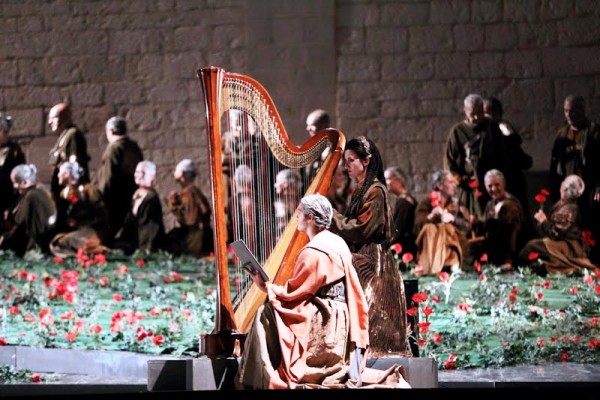 The orchestration is rich with a special evidence to soloists: it is enough to remember Medea’s first aria Sommi dei with concertant violin or the begininning of second act, introduced by a splendid harp’s solo while the same instrument will punctuate the whole Creusa’s aria. In Martina Franca the opera was well conducted by Fabio Luisi. He leaded the ensemble with decision and clear ideas.

The right pace was substained by a very good balance among the different orchestra sections and Luisi showed attention towards the stage, creating a perfect union between voices and orchestra (luckily enough, the acoustic was very good) and the solo parts were excellent. 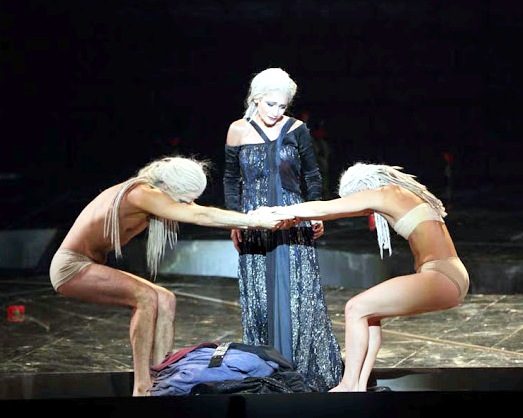 The vocal cast was in the whole on a very good level. Protagonist was Spanish soprano Davinia Rodriguez. She gave a committed performance and was fully in part with a deeply rooted phrasing and strong accents. She gave justice not only to the tremendous magician but stressed also the character’s most intimate side, that of the wounded abandoned woman. Her voice is not the strongest but she showes a very good technique, using chest lower notes for increasing the dramatic accents, while top notes are sure like blades.

Giasone was Michael Spyres, very convincing with his lyrical tenor, a fluid vocal line and a self conscious acting. Mihaela Marcu (Creusa) has a soft warm-toned lyrical soprano
. Her performance went better and better along the evening: in her first aria that opens the opera her vocal line showed some effort in the high notes, then she gained fully security in herself and was fully convincing. 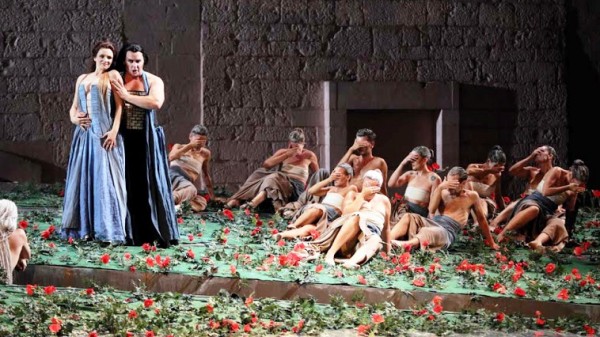 Enea Scala (Egeo) was convincing also on the acting side mixing expressivity and precise vocal line. He has a strong physical stage presence and a well timbred and substained voice fully in style for Belcanto.

Creonte was bass-baritone Roberto Lorenzi, maybe physically too young for the part but very conscious in his singing. In the small part of Ismene Nozomi Kato showed expressivity and a fine voice, velvet and homogeneous. It would be interesting to hear her again. Perfectly integrated in the cast were Paolo Cauteruccio (Evandro) and Marco Stefani (Tideo). 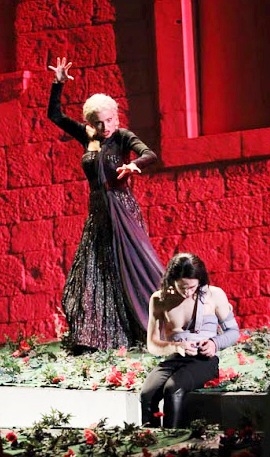 The choir has an important role in this opera. We must praise Transylvania State Philharmonic Choir of Cluj-Napoca, under Cornel Groza always musically accurate and dramatically incisive both in the most intimate or furious moments

The staging by Benedetto Sicca was in the whole traditional. The historical setting was defined by the beautiful costumes by Tommaso Lagattolla and the scene by Maria Paola Di Francesco used the inner façade of Palazzo Ducale as a monumental background enhanced by the light design (by Marco Giusti) with abstract projections on the walls in the most poignant moments of the plot. On the foreground, there was a a reclined floor covered with grass and puppies where all the action took place. Medea’s children were almost always on scene, interpreted by two adult dancers man and woman. Nothing against two excellent artists as Chiara Ameglio and Cesare Benedetti but we are used to imagine two children and it’s a bit puzzling to face two grown ups. For the rest dancers and figurants filled the stage and Sicca showed to be able to direct with sure hand the crowd scenes.

For the rest the staging went on traditional tracks, to the big final where Medea sang her final curse from up high in one of Palazzo’s windows against the other characters on scene. To put the central character away from the stage so high and small deprived her to take advantage of the moment’s climax and the final of dramaticity. 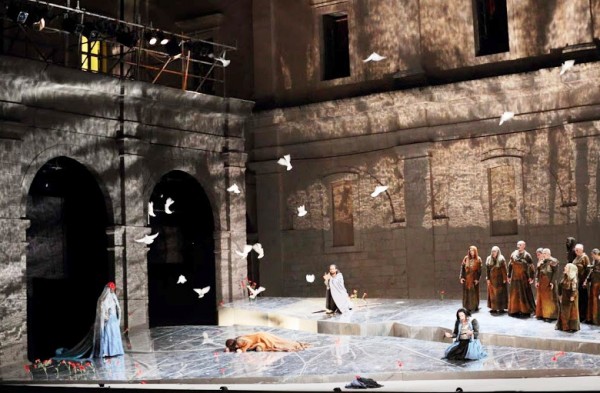 The ‘coup de theatre’ was on the very last notes when Medea disappears from the window space: white doves are set free from backstage and fly on the stage and all along the courtyard. Something that is impressive at the moment, but considering that the magician should run away on a dragons-guided wagon, the change from dragons hasn’t a clear meaning.

Palazzo Ducale’s courtyard was full and the audience has followed the opera with careful attention, with scarce open stage applause but strong ovations for all the cast at the end. 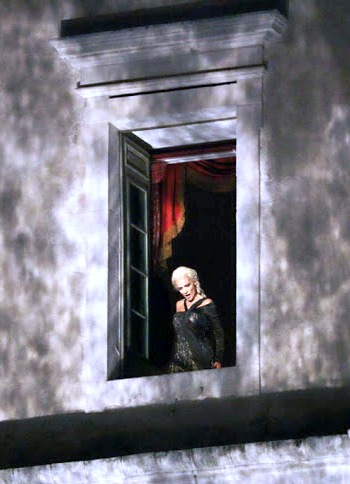