GENEVA: The premiere of Sergei Prokofievs opera The Love for Three Oranges Monday 13 June at Grand Theatre is a succes. Prokofiev is being inspired of the fairy tale, slapstick comedy and satire to create an opera which falls in to three categories; classical, innovative and constructivist, which he often associated with lyrical and grotesque elements.

The Prince´s, well presented and sung by Chad Selton, hypocondria is the despair of his father, the King of Clubs, brilliantly played and sung by Jean Teitgen. But with the help of the sorcer Tchélio, Michail Milanov, and the jester Trouffaldino, elegantly performed, danced and sung by Emilio Pons,  they are entrusted to organize entertainments to make the Prince laugh the only possible cure. Heikki Kilpeläinen is Pantalon.

Well the entertainments dont help, even they are very well played, but the Fata Morgana, Jeanne Piland, appears, who is plotting with Léandre, Nicolas Testé, and Princess Claridge, Katherine Rohrer, as Claridge, wants the Prince to die, so she can take over the throne., when the King dies. For the first time i in this production understod the story by watching it. In earlier productions I have seen the history has not been clear to me. This is an importent part of a succes that the audience understands, that Princess Ninette, Clémence Tilquin,  is being turned in to a rat, and again recovers her human form. In this production we do see a rat, and this is essential to understanding the piece.

Furthermore, for the international city Geneva is, it was a great pleasure that the theatre in addition to texting in frensh language also was texting in english.

In front Chad Shelton as the Prince. Behind Katherine Rhrer and Nicolas Testé as the intrigants Princess Claridge and Léandre. Foto Yunus Durukan.

Well, this “simple” plot is the background adapted from Carlo Gozzi´s play “L´amore delle tre melance” from 1761which prokofiev was being acquainted with as he got it as a present from Vsevolod Meyerhold.

After having agreed with the then director Cleofonte Campanini of the Chicago Opera Association to write an opera based on this history.  It was premiered in Chicago 30 December 1921
. And was immediately a success allthough the critics derided its lack of melody. But this critical comment isn´t true. With opera seeking a new identity in the post war world, Prokofiev chose here the path of the absurd and burlesque comedy, at the expense of any kind of realism  or psychological depth. This ludicrous tale bordering on surrealism gives rise to a love story within the framework that is more ridicolous than amusing, thanks to a well-constructed score, with leitmotifs combined with ostinati and other repetitive patterns that correspond to a definitive interior logic.

Prokofievs music, inspired by the film industry, furnishes a structure that compensates for the complete absence of plot, he devises short sequences to breath new life into the operatic form. Which the staging and scenography is taking well care of in this production. Prokofievs innovative instrumentation alternates dissonance with sweeping poetic harmonies to create glittering orchestral tunes, well taken care of by the excellent Suisse Romande Orchestra. In this the composer demonstrates his mastery at tone colour and command of compositional technique. The famous March of the Three Oranges in C major announces the arrival of the entertainments, or the extended ostinato under the set piece depicting the Prince´s laughter, but also the Prologue, with its provocative if innoncuos musical skirmishes among the various proups of on-stage observers. The Commedia dell Arte parody is taken well care off, still that we dont directly see any of the famouse figures on stage, but impressions of them. Light by Volker Weinhart.

The musically framework is in the very best hands by the brilliant playing Orchestra de la Suisse Romande excellent conducted by Michail Jurowski, the orchestra has an amazing sound, and many great details and soloparts was noticed.. Choire of Grand Theatre of Geneva well singing, acting and playing a lot of different groups of participants. Choire leader is Ching-Lien Wu. 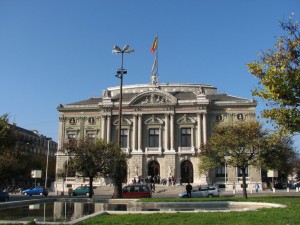 To enlarge photos, please click on the photo below: 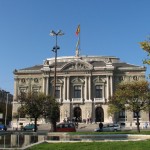