By Fabio Bardelli on 1/01/12 • Categorized as Classical music 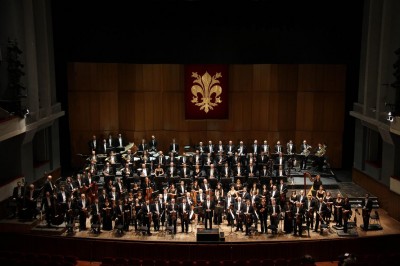 FLORENCE: Another symphonic concert took place in the New Florence Opera House, inaugurated few days ago and that will be closed again next January until the end of 2012, to complete the construction works.

The program of this concert is almost a sign of continuity between Nineteenth Century and modern music, with contemporary Italian composer, Matteo D’Amico, performed together with Beethoven and Brahms
. In D’Amico’s short piece (Haydn allo specchio, Haydn in the mirror) Haydn and his classicism are the starting-point of an agreeable but non particularly interesting work, at least at a first audition.

Then came Beethoven’s piano Concert nr. 4 and Brahms’ 4th Symphony: a couple of perfect compositions, my first choice in the whole repertoire. Two masterpieces composed in a time span of eigthy years and performed by all the major musicians of the 20th century.

It makes no sense comparing different pianists but it’s enough to say that Rudolf Buchbinder is now internationally acclaimed as one of Vienna Classicism’s most autoritative players.

The disappointing incipit of the initial Allegro moderato of Beethoven 4th Piano Concert, the famous five bars which are a real torment for every pianist, let us understand from the beginning how the performance will be. Buchbinder is, as usually, rather anonymous and renunciatory. Below his correct and agreeable touch, there are a very few traces of study in depth
. This is easy to see also in the second moviment, which is merely “played” by the soloist. Unfortunately Buchbinder ignores every idea or every deepening coming from Fabio Luisi’s orchestra.

The conductor holds the situation in his hands, but can do nothing against the soloist’s superficiality; also the third movement is just pleasant and nothing more

intercourse?• “Is your partner able to become aroused and reach viagra.

. Anyway, the performance had a moderate success, and Buchbinder played an encore.

Luisi’s interpretation of the wonderful Symphony nr 4 by Johannes Brahms is very interesting. The italian conductor shows to have very personal ideas about how the page should sound, and the Orchestra del Maggio Musicale Fiorentino follows him rather well, apart some terrible sound from the horn section. The interpretation is involving, the tempo is rather personal, and conductor takes care of instrumental details
. Sometimes it was like sudden lightings which underlined part of Brahms’ wonderful score. More a “Mediterranean” than “Nordic” lecture, which was greeted by great success.

The New York Metropolitan Opera recendly appointed Fabio Luisi its Chef Conductor. He quite deserves the trust they place on him, we are sure that in not too far a future he will have his place among the most considered conductors in the world.