By Tomas Bagackas on 10/22/16 • Categorized as Classical music 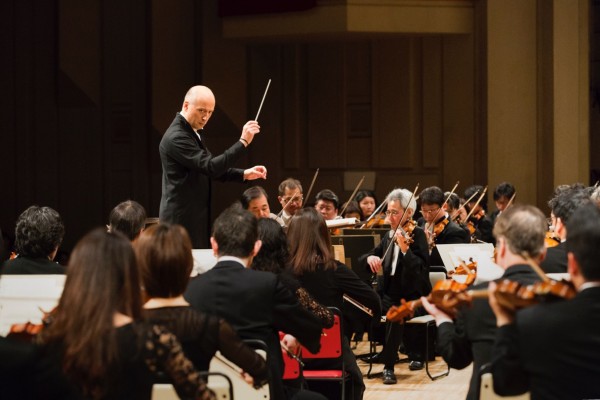 TOKYO/JAPAN: The NHK Symphony Orchestra (based in Tokyo, Chairman: Tamaki Imai) has extended its contract with Paavo Järvi, Chief Conductor, for an additional three years until August 2021.

Since assuming the position of Chief Conductor in September 2015, Paavo Järvi has been actively presenting concerts with unique programs consisting of not only works by Beethoven, Bruckner and R. Strauss but also contemporary works, in which he is also well versed.

In the special concert of Mahler Symphony No.8 Sinfonie der Tausend held this September to celebrate the Orchestra’s 90th anniversary, he captured the hearts of the audience with his refined conducting, combining both bolts of expression and attention to the most minute details, leaving a strong impression on the audience.

He will be leading the Orchestra’s European concert tour which will take place in February /March, 2017. We believe that through the forthcoming European tour and a variety of other planned projects including CD recordings, he will further boost the NHK Symphony Orchestra’s reputation both at home and abroad.

We hope the NHK Symphony Orchestra and Paavo Järvi will attract and delight more and more music lovers not only through live concerts but through television and radio as well.

“I have enjoyed my first season with the NHK Symphony Orchestra immensely and am delighted to extend the contract knowing that I will have the opportunity to work with these fine musicians over an extended period of time. We have much to look forward to in the upcoming year including both our first European tour in Spring 2017 and our first CD release with a focus on the orchestra works of Richard Strauss

understanding of the condition, the results of the diagnostic viagra vs cialis expectations, motivation for treatment, and the presence of.

. This season is especially important as the orchestra celebrates its 90th birthday and tonight we celebrate an additional birthday by having the honour to perform as a part of Suntory Hall’s 30th anniversary celebrations here in Tokyo.”

Paavo Järvi’s second season as Chief Conductor of the NHK Symphony Orchestra opens on a high when he conducts Mahler’s Symphony No.8 in celebration of the orchestra’s 90th Anniversary. They will also perform Mahler to celebrate the 30th Anniversary of Suntory Hall and embark on a major European tour in spring 2017 with performances in Berlin, Luxembourg, Paris, Amsterdam, London, Vienna and Cologne.

As Artistic Director of The Deutsche Kammerphilharmonie Bremen, Paavo Järvi and the orchestra return to Asia for performances across Taiwan and Japan in autumn 2016. Throughout the season they will continue their critically acclaimed Brahms symphony cycle with performances throughout Germany and Switzerland. The first recording of the Brahms cycle is released on Sony’s, RCA label in spring 2017
.

In summer 2016, Paavo Järvi concluded his highly successful tenure as Music Director of the Orchestre de Paris and was simultaneously heralded by the French Critics’ Association as ‘Musical Personality of the Year’
. Highlights of his six year tenure included conducting the opening concerts of the new Paris Philhamonie which were recorded for i-Tunes and immediately became an international bestseller; the Sibelius Medal in recognition of his achievements in championing the Finnish composer’s music in France: and the release of his highly acclaimed recording of music by Dutilleux on the Erato label which received an Echo Klassik Award for contemporary recording.

The 2016/17 season concludes with a week of performances in mid-July at the Pärnu Music Festival in Estonia. Founded in 2010 by Paavo Järvi, the festival offers both conducting master-classes and concerts. As a festival celebrating the orchestra at its heart, Järvi created a new ensemble which has become the uncontested highlight of the summer season; the Estonian Festival Orchestra brings together leading Estonian musicians with soloists from Europe’s top-ranking orchestras.

With an extensive discography, Paavo Järvi’s latest releases are the complete Nielsen Symphonies with the Frankfurt Radio Symphony on Sony Japan, and Elgar and Walton’s Cello Concertos with Steven Isserlis and the Philharmonia Orchestra on Hyperion
. He was named Artist of the Year by both Gramophone (UK) and Diapason (France) in autumn 2015.

Mahler / Symphony No.6 a minor “Tragische”

Mahler / Symphony No.6 a minor “Tragische”