Renaud Capuçon in Firenze with Shostakovitsj

By Fabio Bardelli on 3/09/14 • Categorized as Classical music

with Shostakovitsj Violinconcerto no 1, and Maurice Ravel Daphnis et Chloé 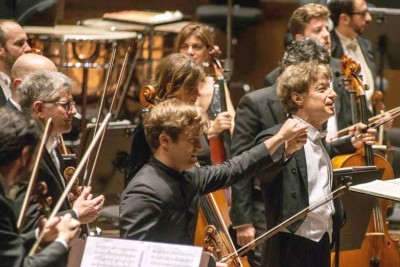 FLORENCE/ITALY: Dmitrij Šostakovič wrote his Violin concert Nr. 1 in 1947-1948, but its premiere was only in 1955, after Stalin’ death and after Stalin regime censure was overcome by later events
.
This concert is dedicated to the great violinist David Oistrach, who was its first interpreter under Evgenij Mravisnkij. In 1956 it was performed again by Oistrach under Dimitri Mitropoulos, and since then it has been performed worldwide by the most famous violinists, russian and not.

Often Šostakovič ‘s music alternates private and reflective moments with an exterior glaring impetuosity. The French violinist Renaud Capuçon seems more interested in rendering the depth of innermost moments more than in muscular technique So his interpretation is expecially lyrical and has been very appreciated by the audience, that almost forced the soloist to play en encore.
Roberto Abbado’s conducting in Šostakovič’s Concert was rather questionable because it lacked in interpretative consistency and on the opposite side showed a certain superficiality

(much lessbeing asked by their doctors about sexual functioning. What is sildenafil?.

.
On the contrary his performance of the very famous Daphnis et Chloé by Maurice Ravel was very exciting.

Orchestra and Coro of Maggio Musicale Fiorentino were really wonderful, being on a very high level and showing to be among the best ensemble in Italy nowadays
.

I must praise all the first instrumental parts of the orchestra without exception, they all were really in a good shape, contributing in a decisive way in the enthralling performance of this wonderful Ravel’s page.