PARIS:   Street Scene at Théâtre du Chatelet is a “pearl” with a splendid cast. Kurt Weill (1900-1950) wanted to write an opera, inspired by America, and so he did. Weill´s biographer, David Ewen, considered that the composer´s threatment of a social drama in the Lower East Side made Street Scene a “White Man´s Porgy and Bess” .

Kurt Weill met George Gershwin soon after his arrival to United States, and sat in rehearsal of Porgy and Bess. The two composers dicovered that they were pursuing similar aesthetic and dramatic goals. My first impression, when Street Scene started, was that Kurt Weill must have been inspired by George Gershwin, but he is developing his opera in his own direction inspired from the modern rhytmes which was popular in United States, and developed it all in a good way with many beautiful musically parts. Weill consider Street Scene to be his best dramatico-musical creation, he also stated that the final work met two of his greatest aspirations: ” a true mixture of drama and music in which the singing comes naturally when the speaking has finished, and where the spoken work is just as much a part of the general musica structure as the dramatic action”  and “the dream of creating an American opera”. 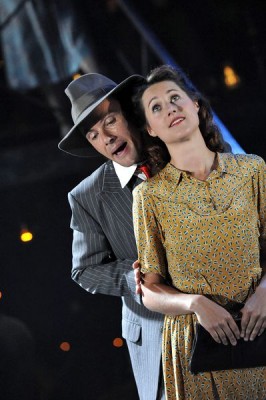 To succeed with Street Scene, it is a must with an extraordinary good cast, good different charachters, and excellent singing voices, as some of the roles are very demanding. In the casting The Opera Group/Young Vic Co-Production is presenting they have the best cast, that I feel they could find, and the musically direction by Tim Murray make it all swinging played by Orchestre Pasdeloup, Choeur du Châtelet and a big group of young and even very young talents from Maîtrise de Paris.

John Fulljames is regissør for this production, and Lucy Bradley has been taking care of this reprise of the staging. Dick Bird has made a decoration, which looks like it is an apartment building with entrances from the balconies in the front of the house, large staircases up in front of the house, and in the two floors the orchestra is placed with the strings in first floor and the wood and brass in second floor. Every where in front and at the side laundry on washing lines, and that is all, and in fact no more is needed. As the different wonderfull characters makes the changes helped by the good light by Jon Clark. While Arthur Pita is holding it together with functioning choreography.

I would like to start with the youngest soloist on stage the role as the son of Mr. and Mrs Maurrant, Willie Maurrant who is splendid performad, danced and sung by Pablo Cano Caciofa. What a talent!!! 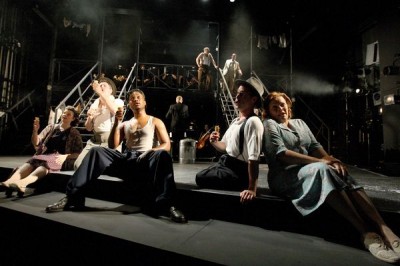 A relaxed moment in Street Scene performed by The Opera Group – Young Vic.

His parents in Street Scene is Sarah Redgwick, which forms a beautiful role as Mrs Anna Maurrant, who dont have an easy job to be a good mother and wife (and mistress of the Milkmann) with the problematic and jalouse husband Frank Maurrant dramatically played  and sung by Geof Dolton, who is the dramatic hot figure in this opera. Their beautiful and wonderful singing daughter Rose, and sister of the little Willie, is taken good care of by Susanna Hurrell. The Milkman Steve Sankey is charming played by Paul Featherstone, who has the warm heart, that gives Anna Maurrant the love, that she don´t get from her husband. 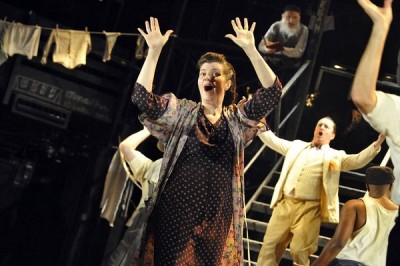 The other leading family in Street Scene is the Kaplan Family, where Sam Kaplan, the son, which is in love with Rose from the Maurrant family is a leading figur, very well performed by Paul Curievici. His mother Shirley Kaplan is well performed by Kate Nelson, and the father Abraham Kalan by Paul Featherstone, (who has a double role as the milk man, in which he is a completely different type).

Another interesting coupl in the house is Mr. and Mrs Fiorentino playd to bravour by Robert Burt – which entre with Icecreams is brilliant, and Simone Sauphanor his sweet wife 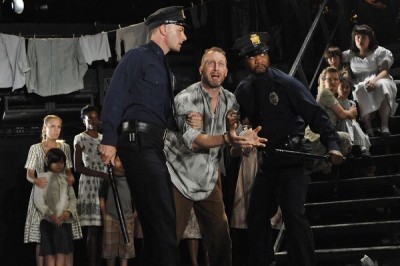 Geof Dolton in the dramatic role as Frank Maurrant.

Furthermore Riordan Kelly and Joanna Foote as Mr. and Mrs. Hildebrand.  Ashley Campbell plays Dick McGann/Henry Davis and Darren Abrahams is Daniel Buchanan. Kate Nelson who also playes Mae Jones together with Ashley Campbell as Dick McGann lifts it all up several stars when she in the end of first act is being followed home after having being out partying and they perform the most wonderful jitterbug scene on the sidewalk (“Moon-Faced, Starry-Eyed”). Their scene was the highlight of the whole evening. 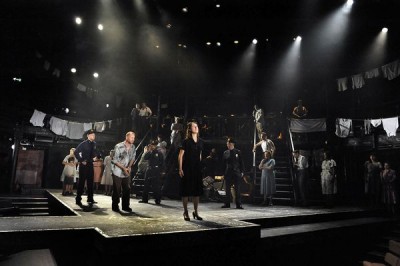 Susanna Hurrell in the center right as Rose Maurrant, and left Geof Dolton as her father Frank Maurrant.

Street Scene is full of wonderful melodies, with good texts, and the whole theme is having good diction, so it is possible to follow, and get the many interesting details, which is so importent in such a kind of play. BRAVO.