The European Night of Museums Saturday May 19th, 2012

EUROPE: The 8th European Night of Museums will be held all over Europe on Saturday May 19th, 2012. During this night thousands of museums across Europe will open their doors for special late night events, the majority of which are free.
The Night of Museums is an occasion for visitors to rediscover museums through treasure hunts, theatralised guided visits, sleepovers, special museums’ facade lighting, concerts and other surprising activities

Find all the details at www.nuitdesmusees.culture.fr

Cultural Spring Rendez-vous
First launched in 2005 as an initiative of the French Ministry of Culture and Communication, the European Night of Museums spread through Europe over the following years and is now one of the most popular events of the cultural agenda.
The event is held simultaneously in some 40 European countries with 3000 participating venues including 1300 museums in France.
The European Night of Museums is placed under the aegis of the Council of Europe, of UNESCO and of the International Council of Museums (ICOM).

Special Night of Museums events
This year, visitors can enjoy various activities designed specifically for this night. From kids to adults, music to theatre amateurs, and to adventure and surprise lovers – everyone will find something on Saturday May 19th
.
In France
− Fluorescent games at the Museum of Sport, Paris
− Photo workshop for young visitors “Oh My Ghost” at the Petit Palais, Paris
− Mauve Night with the artist Pierre Ardouvin at the Museum of Fine Arts and other museums of Tours
− Special lighting of the King’s Grand Apartments and the Hall of Mirrors at the Château de Versailles
− Medieval games and hide-and-seek at the Museum of Cluny, Cluny

In other European countries
− Disguised party “Pirates of the Baltic” at the Museum of the Sea, Riga, Latvia
− Sleepover in the Egyptian Gallery of the British Museum, London, Great Britain
− Flashmob at the Museum of Modern Art in Moscow, Russia 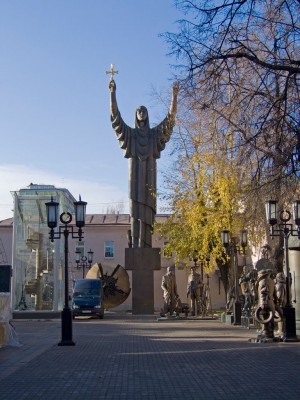 Museum of Modern Art in Moscow

− 1980s disco party at the Museum Satakunta, Pori, Finland
− Cutting edge contemporary music, installations and pop-up surprises at the National Museum of Scotland, Edinburgh
− Special events on the “100th anniversary of the Cinema in Estonia” theme in museums of Estonia
− Exhibition “Titanic, Reflections and Reactions, Queenstown 1912” at Cobh Museum in Cork, Ireland
− Treasure hunt and jazz music at the National museum of Art of Romania, Bucharest, Romania
− Jazz improvisations “Clic si suona” inspired by photographies at the National Museum of Capodimonte, Naples, Italy.

Image of the Night
For the 6th consecutive year Neuflize Vie, partner of the event, organised a competition among several artists to create the image of the Night 2012. This year the project of Le Gentil Garçon was chosen as an invitation to everyone to enjoy this European Night of Museums.