By Fabio Bardelli on 8/03/13 • Categorized as Festival,Opera 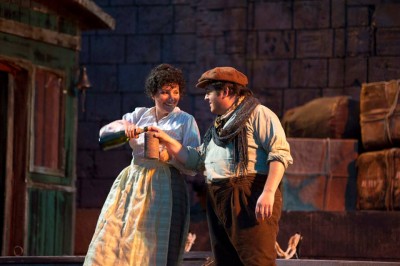 TORRE DEL LAGO: The unusual “diptych” Tabarro-Cavalleria Rusticana that opened the 49th edition of Puccini Festival in Tuscany’s Torre del Lago (birthplace of the great composer) was matched by a scarce public, certainly not filling the large Theatre built few meters from Puccini’s house, in front of Lago di Massaciuccoli
. This shows the poor interest for an undertoned opening that framed a grey performance of low level both musically and scenically
. 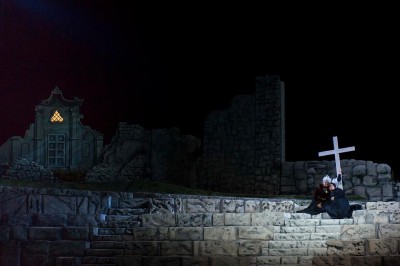 The choice of staging these two operas together is curious and almost incomprehensible, and marked from the beginning by the fact to perform Tabarro alone without the other two operas of Trittico (Suor Angelica and Gianni Schicchi), so going against Puccini’s desire
. Apart this, in this occasion the two works have unfortunately seen Alberto Veronesi conducting, and he has the biggest responsabilities of the low quality of the performance.
Modernity and great interest of Tabarro in Puccini’s production are quite vanishing under Veronesi’s modest, monotonous and uniform concertation. He shows neither pace nor timbrical or armonic research, and never puts in evidence the topic moments of the score, everything seems just casual, too much casual in Veronesi’s concertation. Things have gone a bit better in Cavalleria Rusticana where Alberto Veronesi expresses some typical Italian expressivity, but it is nevertheless unacceptable that such a conductor (who performs in many theatres and on records) can’t keep together orchestra and singers.
The singers must match Veronesi’s presence on the podium, and they did more or less what they wanted 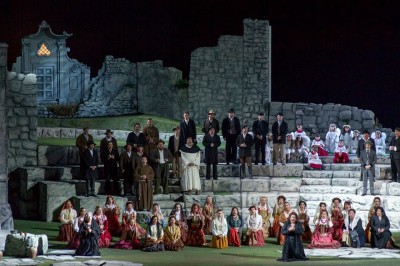 Bariton Alberto Gazale, whose voice seems to lose in volume and timbre, seemed more at ease in Cavalleria as Alfio than in Puccini’s infid vocality of Michele. He has anyhow a rather correct singing line that allows him to be well appreciated.
Tenor Francesco Anile sings generously but generically in Mascagni’s score, where he maybe felt sure of his vocality more than in Tabarro, where his Luigi was at the contrary vocally more convincing.
Chiara Angella as Giorgetta was rather appreciated in the whole, even if her voice has not a very charming timbre.
The other singers in Tabarro were on an average level; we must point out old bass Luigi Roni who at his age, and in his embarassing vocal form, yet dares to be on stage.
In Mascagni’s Cavalleria the more interesting artist was soprano Anda Luoise Bogza with her rather correct vocality, even if her phrasing is a little monotonous. Altogether her character was rather well depicted, quite following the tradition.
The other singers in Cavalleria Rusticana were on an average level, while Orchestra and Chorus were on a medium-low level.

The staging of Tabarro by director Antonio Calenda was essentially useless, there were no particular ideas but it followed more or less correctly libretto’s indications. In Cavalleria (the director was again Mr. Calenda) the scenography was generic and without temporal references, as a Greek or Roman theatre, so to demonstrate the atemporality of the cruel plot, but the staging followed the usual stereotypes with typical Sicily costumes and coppola hats, women’s shining dresses, friars, and children wearing wings as they would go always in religious procession
.
Singers’ acting was left to the personal experience, and generally rather scarce enough. A note on the “Siciliana” the aria that opens Cavalleria Rusticana, sung by tenor Mr. Anile on stage, instead of behind the scenes as it should be, and this without any dramatic reason.
The costumes by Stefano Nicolao were foreseeable and without any originality. Almost unexistent the light design specially in Tabarro.
Good success from the rather scarce audience. It is really a pity, a province grey performance and a wasted occasion.