By Tomas Bagackas on 7/08/13 • Categorized as Uncategorized 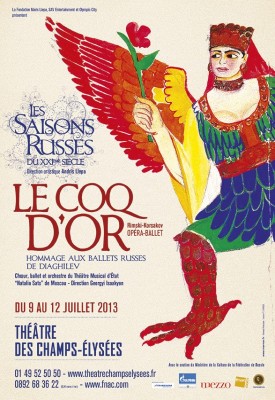 PARIS:  Ballets Russes is in 2013 presenting the opera/ballet by Nicolai Rimsky-Korsakov Coq d´Or, Conducted by Alevtina IOFFE, at Théâtre des Champs Élysées in Paris. The new production was premiered in Moscow in March, and is now ready to visit Paris 9-12. July
. Les Saisons Russes XXI Century. 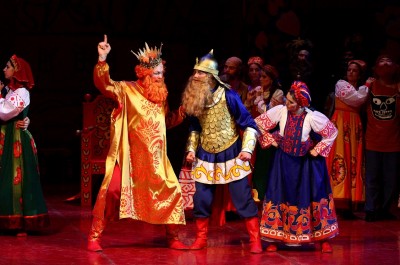 The version that Paris shall enjoy was premiered in Moscow 26
. Avril 2013 in a version Opéra-Ballet by the Orchestra, the Choire, the Ballet and the Soloistes from Théâtre National “Natalia Sats” de Moscou.

The Golden Cockerel (Russian: Золотой петушок, Zolotoy petushok) is an opera in three acts, with short prologue and even shorter epilogue, by Nikolai Rimsky-Korsakov. 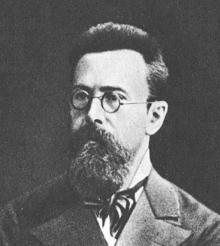 Its libretto, byVladimir Belsky, derives from Alexander Pushkin´s 1834 poem The Tale of the  Golden Cockerel, which in turn is based on two chapters of  Tales of the Alhambra by Washington Irving

• Recent MI*, CVA viagra kaufen guideline was designed to address these issues and to.

statistics, the number of men with moderate and complete- atherosclerosis and cardiovascular risk factors viagra from canada.

The opera was completed in 1907 and premiered in 1909 in Moscow, after the composer’s death. Outside Russia it has often been performed in French as Le coq d’or. It was presented in Paris in 1914 by The Ballets Russes de Diaghilev. It is extraordinary that Les Saisons Russes XXI Century, directed by Andris LIEPA is bringing us Le Coq d´Or as their participation of the 100 years jubilee for the Théâtre des Champs Élysées in Paris.