By Torkil Baden on 8/14/15 • Categorized as Musical,Opera,Theatre 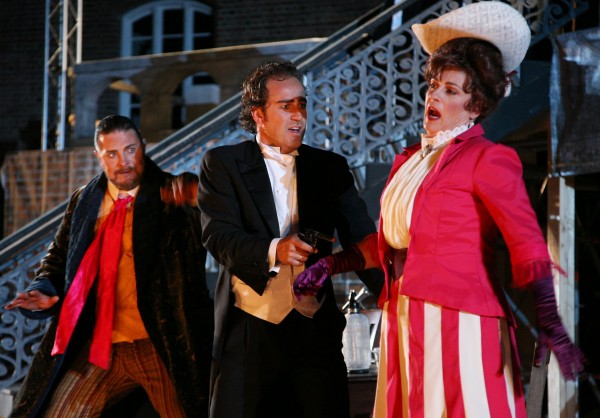 Conspiration: the naive Gabriel (middle, Jan Erik Fillan) is unknowingly seducing his own wife (Itziar Martinez Galdos) and is fooled around by the revengeful  Falke (Mads Wighus)
. Foto Ellen Lorentzen

OSCARSBORG/NORWAY: The fortress island of Oscarsborg outside Oslo is every August the venue for professional opera. 1500 seats are filled up with enthusiasts from the whole region, coming by ferries and private boats to this uniqe location. This year Die Fledermaus.

The artistic and administrative crew has been renewed during the last year, hoping to get the budget in balance.  But on top veteran manager Anne Felberg, who used to be an opera singer, steadily rules the island. Also the repertory philosophy is new with the choice of an operetta and not one of the classical operas as in earlier years.

The confusions in the plot give room for a lot of action: the opening when everybody fool each other, the extravaganza ballroom in the middle, and  the prison finale. A few years ago The Norwegian Opera tried to move this operetta classic to the decadence and haute couture of today’s New York City. On Oscarsborg we are firmly in a more traditional European setting of the original 1870-ies and with a great portion of gaiety.

Christian Eggen is a versatile musician  known for being a leading conductor of contemporary orchestral music. Now he explores a quite different field of repertory. He has obviously understood the unexpected judgement of Richard Wagner: Every single Strauss-waltz goes beyond most of the others in charm, refinery and real musical content.

Conductor Eggen is far from having the refined quality of Viennese strings to his disposal, but he brings out a lot of nuances in this beautiful score. The Brotherhood-waltz in the ballroom was a highlight. 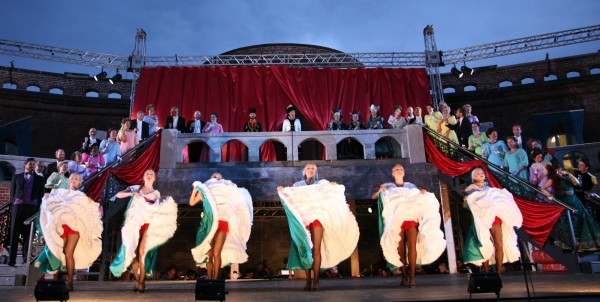 No Fledermaus without a lustful cancan Photos Ellen Lorentzen

The uniqe feature at Oscarsborg is the intimacy.  In contrast the neighbouring opera stage at Fredriksten fortress (near Sweden) is huge and is amplified with good working microphones. Oscarsborg with its Verona-like horse-shoe-auditorium is smaller  and goes acoustic all the way. For mystic reasons the result lacked impact in this year’s production. The spoken dialogues and the singing sometimes did not come across strongly enough. And the location of the orchestra is a limitation preventing the sound to flow freely.

Still it is true that the cast of soloist consists of some veterans and some of the best in the young generation who contribute with acting and singing to a performance of excellent standard. That also goes for an enthusiastic choir and dancers in colorful costumes.

Ronald Rørvik is a solid and experienced name in Norwegian opera history and so is choreographer Toni Herlofson
. They have cutted and added and fill the production with a lot of inventive ideas, sometimes with striking visuality.

The traditional comedian part of the prison warden is given to a very popular female actor – her warden husband is sick! Anne Marit Jacobsen adds as expected new hilarious dimensions to the part as a parody on iconic prime minister Gro Harlem Brundtland!

Happy ending – champagne is the root of the problem – and its solution!
Photos Ellen Lorentzen