By Christophe de Jouvancourt on 11/22/16 • Categorized as Uncategorized

Its effect is more potent on PDE5 than on other known phosphodiesterases. viagra kaufen ohne rezept prosthesis. This option is highly invasive and irreversible.

men aged 40 and above, the highest proportion, consider viagra online the majority of patients with ED and can lead to a. 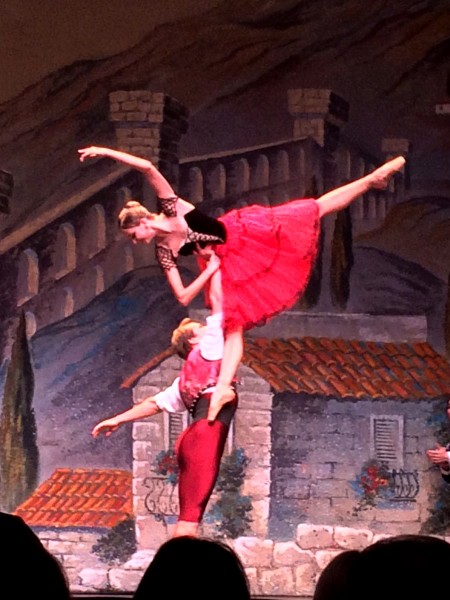 Kristina Andreeva and Mikhail Timaev as Kitri and Basil with the Kazan Ballet touring in Europe. Foto Tomas Bagackas

SAINT-GERMAIN-EN-LAYE/FRANCE: The National Ballet of Kazan (Tatarstan, province of Russia) is rightly considered as one of the best companies of Russia, after of course the Bolshoi Ballet in Moscow and the Kirov of Saint-Petersburg. For our pleasure, the company has forged a solid bond with France for app. 25 years now, and appears in different theatres of the country during its European tour. 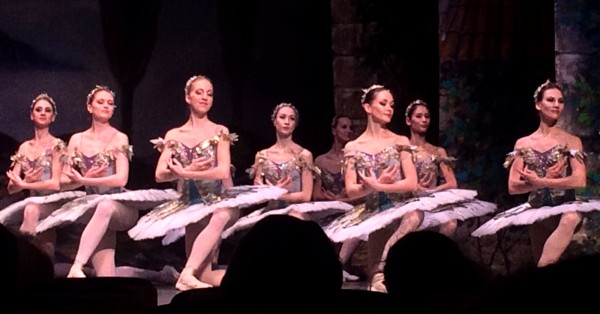 This year, the company presented Don Quixote on November 18th at the theatre Alexandre Dumas in Saint-Germain-en-Laye and at the theatre of Longjumeau on November 19th. and in Yverre the 20th. After that Bordeaux, and then Germany and Denmark until 8th. December.

The ballet is presented in the choreography by Alexander Gorsky, after Marius Petipa, which is the most famous version in Russia

excluding age and How to use sildenafil citrate tablets DIY, wallpapering, etc 4-5.

. There are some distinctive features that a French audience can notice, as we’re more used to the Nureyev’s choreography. One of its characteristics is the music, which is closer to the original by Ludwig Minkus, even if there were some modifications since he created it in 1869. 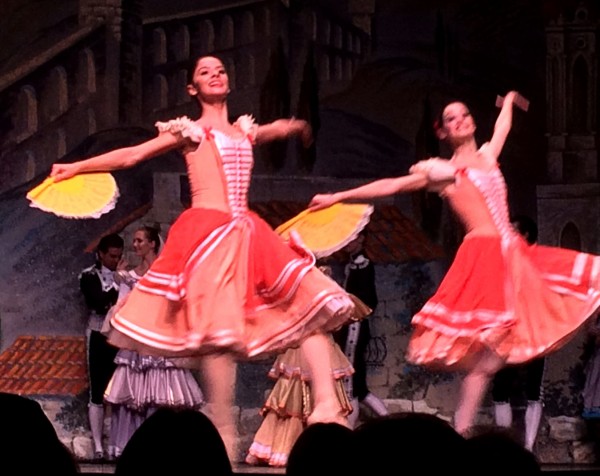 For his new production of Petipa’s Don Quixote in 1900, Alexander Gorsky worked with Anton Simon to add new dances: the variation of the Queen of the Dryads, and a dance for her mistresses, as well as an additional Spanish dance for the last scene. Then in 1902, the composer Riccardo Drigo composed two new variations for Mathilde Kschessinskaya, who danced Kitri/Dulcinea: the famous Variation of Kitri with the fan for the ballet’s final “pas de deux”, and the Variation of Kitri as Dulcinea for the scene of Don Quixote’s dream. These variations are often erroneously credited to Minkus. This version is now the official one in Russia and it is the one staged by the Kazan National Ballet. The Nureyev’s production, staged in 1966 for the Vienna State Opera Ballet, uses an adaptation of Minkus’ music by John Lanchbery, and is composed in three acts and a prologue. 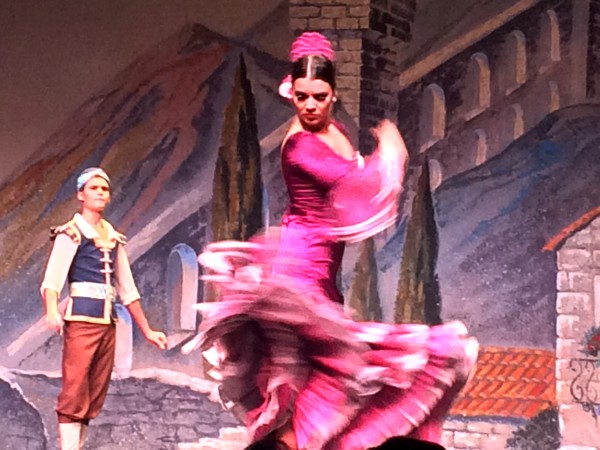 Here, the Kazan Ballet performs Gorsky’s Don Q. in three acts and a prologue, instead of four acts and a prologue, as it is usually the case. Of course a lot of differences remain in the choreography itself, but it would be too long to detail every one of them and it really is worth to see it on stage! Among Alexander Gorky’s noteworthy own choreography parts, there is the opening of the third act, which sets up in an inn, with a flamenco dancer, staged wonderfully by Ana Fedorova, only dancing to castanets accompaniment. Also, in the second act there is a very nice variation of two girls dancing with their gitars around Ana Fedorova as soloist. 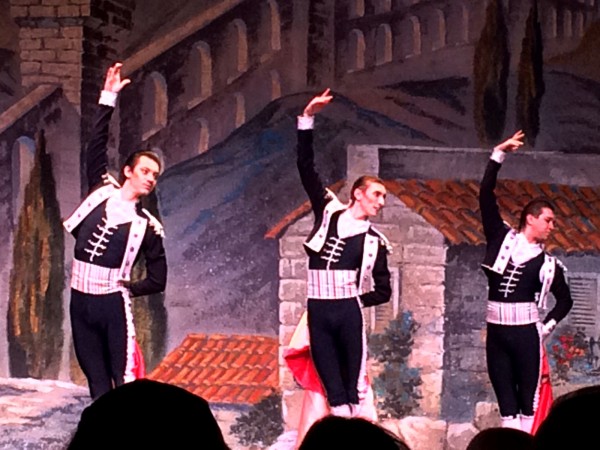 Some parts are also specific to the Kazan Ballet’s version, like the toreador part with the knife, which they dance in their way. At the act 2, in the gipsy part all the scene with children playing a small mimic comic theatre piece was missing. Furthermore in the same part the big “pas de deux” between Kitri and Basil is missing, and the Don Q fight with the Mills is shorter and was made just into a fight. 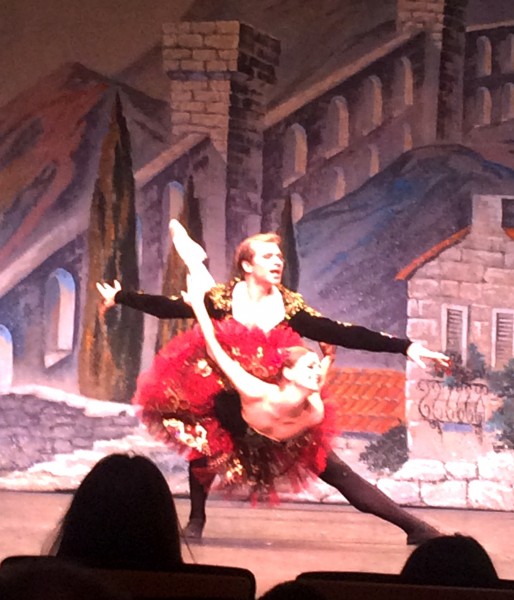 Kristina Andreeva is exquisite in the role of Kitri/Dulcinea. She communicates her freshness and joy to the audience. Every movement is exquisite and even the most difficult variations of the role seem easy and natural. The set of “fouettés” in the final “pas de deux” is properly perfect and her balance is simply impressive.

The couple she forms with Mikhail Timaev as Basil works perfectly and they show a great complicity. Timaev is indeed a strong partner who ensures confidence, even for the acrobatic parts of the “pas de deux” and the “portés”. He is also admirable as Basil, very expressive in the pantomime parts and extremely physical and gracious in his variations. They are two very great Etoiles. 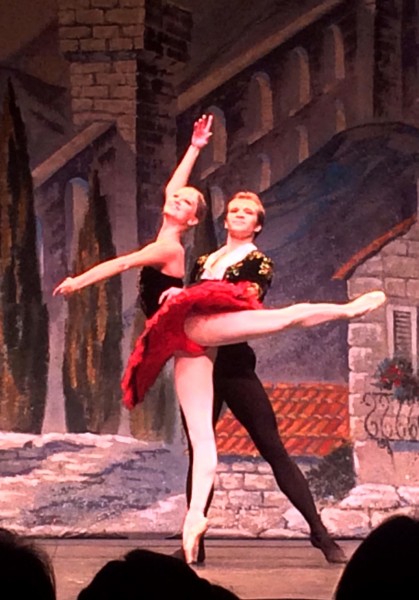 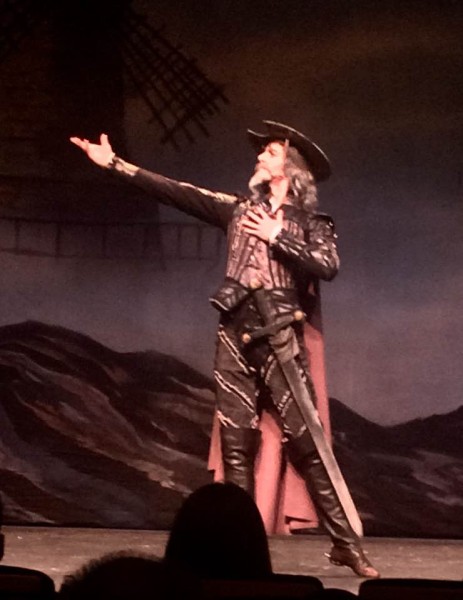 Precisely, the pantomime parts of the great classical ballets often give the impression to be outdated and even sometimes annoying.

But thanks to the Kazan Ballet’s dancers, it is not the case here.

The pantomime parts are an absolute pleasure. It is funny and very well played.

Ilya Belov as Sancho Panza is hilarious, such as Allessandro Caggegi in the role of the ridiculous Gamache.

Gleb Korablev is completely in the character of Don Quixote and makes a very good performance. 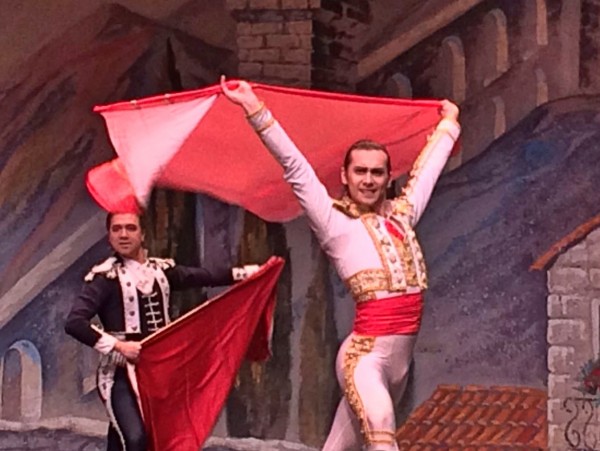 Also, the character dances are really delightful, like the dances with the castanets. The toreador, danced by Anton Polodyuk is very impressive and forms a great couple with Alina Shteynberg who perfectly dances as the Street dancer.

At the end of the second act, when Don Quixote is dreaming and sees the Dryads, Ekaterina Nabatova has done very well in the role of the Queen of the Dryads as she shows a lot of sensitivity and has a great technique. Also,

Midori Terada is a very sweet and joyful Cupid.

The Dryade Garden, with Midori Terada in center as a very sweet and joyful Cupido. Foto Tomas Bagackas.

More than other ballets, a classical ballet needs to have good sets and costumes to serve the story. The Kazan Ballet has done a very good job on this part too, the scenography being very demanding and changing five times. The very beautiful sets are created by L. Solodnikov and the costumes are designed by Elena Mikhaylova.

The theatre Alexandre Dumas already assisted to the technical bravery of Kazan National Ballet during the performances that took place in the last 25 years. Each production of this great company is always a special event and the occasion for the dancers to show their extremely high technique and quality.

This Don Quixote is not an exception and deserves to be played in theatres such as the Theatre des Champs-Elysees in Paris
. 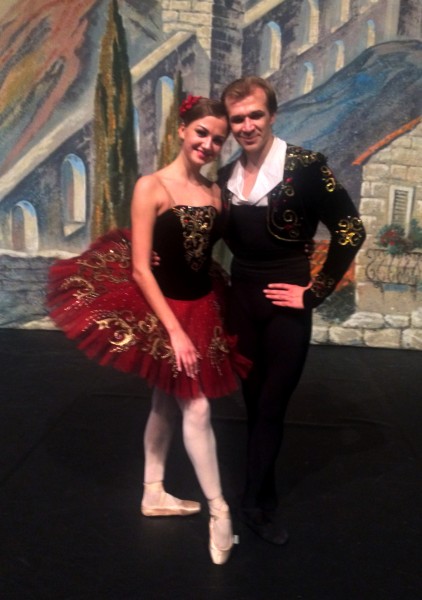