OSLO/NORWAY: Once again the incredible Eugenie Skilnand in a role which is like created specially for her and her outstanding talent. – Closely followed by her lovely young and innocent Vronsky – Douwe Dekkers. 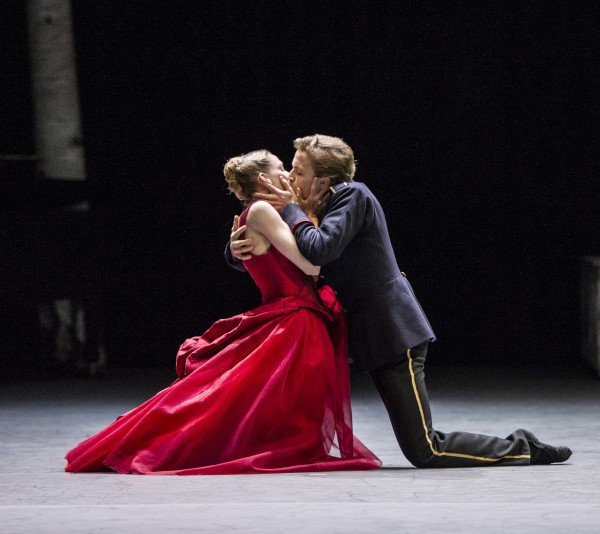 In 1873 Leo Tolstoy begins writing a contemporary novel Anna Karenina. This is the novel that begins with the famous words: “All happy families resemble one another, each unhappy family is unhappy in its own way” Many literary connoisseurs have over the years counted just Anna Karenina as their favorite works. 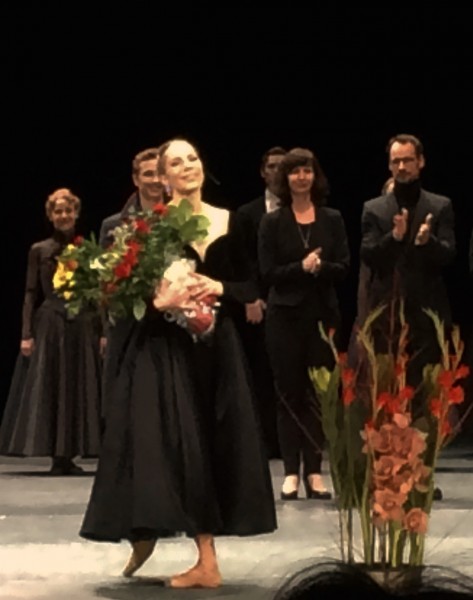 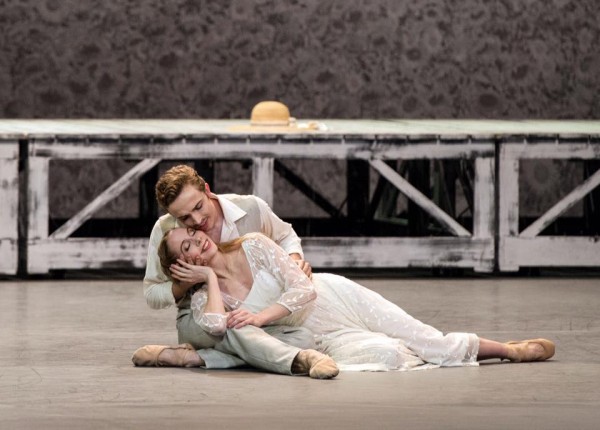 Through many different interpretations of famous roles Eugenie Skilnand has developed a masterful form to tell the most complicated role characters of completely different kinds, so that they become real for the audience. Combined with her virtuosic dancing elegance including outstanding toe technique and great formed details when she is lifted, this makes her performances into something quite extraordinary. Her expressive language is rich, from the innocent young girl, the happy happy amorous woman, to the dramatic, depressed, grief filled woman who is about to give up her life because of life’s difficult and excruciating pages. This whole registry Eugenie Skilnand brings  on stage in hers roles, she performs it with great virtuosity and deep empathy, so that the audience, which in this case also are including Rachmaninoff magnificent music surrounding this Anna Karenina production with Håvard Gimse at the piano and the well playing Opera-orchestra conducted by Paul Connelly, gives the audience an unforgettable experience of this Christian Spuck production, who is a co production with Ballet Zurich, where it had its first production inOctober 2014
. 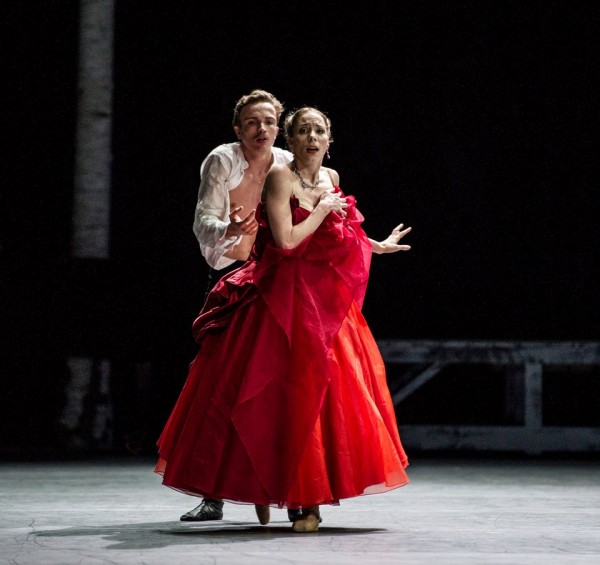 Ballet Ingrid Lorentzen told us before the premiere, that all performances of Anna Karenina is sold out even before the premiere. One extra performance will be set up a on March 18. This is quite extraordinary in Norwegian ballet history, and is something that almost just happened year after year with Dinna Bjorns Nutcracker and perhaps Anne Marie Holmes Swan Lake. This underlines the important place that the National Ballet gradually has developed into a quality filled ensemble, which has conquered an important place in the hearts of  the Norwegian ballet audience, that have become emphasized. That has too been giving internationally attention to the company and its productions, so that international stages has begun to invite the National Ballet with its own productions on guest performances. Recently with a Kylian program at the prestigious Theatre des Champs Elysees in Paris, and shortly Ghosts will guest Berlin. It is clear that the National Ballet has had a long way to go from its humble birth as the Norwegian Opera Ballet in 1953, later changing its name to the National Ballet, which properly began to make its mark internationally with Glen Tetley’s  The Tempest – in 1981 to Arne Nordheim‘s groundbreaking music, who for decades was Ballet’s trademark, where Ketil Gudim created the first role of Ariel, a role which was later taken over by new generations of male dancers. Along with a wide range of the Ballet Company’s other foremost dancers. 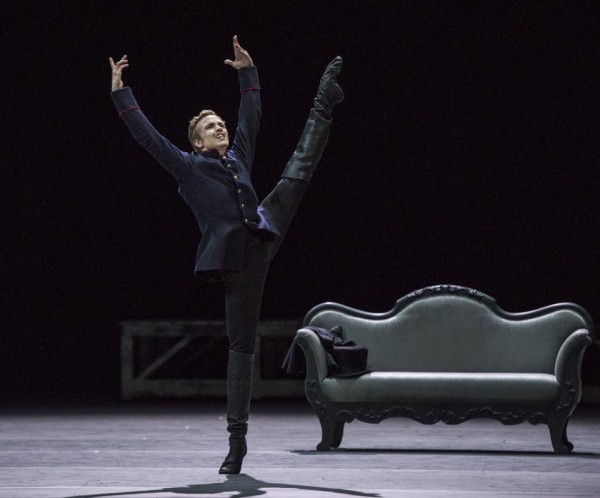 their ED. viagra for sale VCD therapy include their cumbersome utilization and.

. Primarily Douwe Dekkers as her great love Vronskij, which is one of the most importent part of this journey. His presentation of his demanding role, which through his and hers big “love adventure” drag Anna Karenina away from her husband, who retain their son, and did not allow her to see him anymore, but also as the person who fails her when he gets busy with other great women. In this tricky role play Dekkers makes an outstanding role, he is young, celebrated his 25 years birthday on Sunday after the premiere. He has a great charisma, young, beautiful, stylish, and with dance profits that makes him well suited for the role
. He can move quickly, great leaps, details and finishes, secure and virtuoso. A dancer who we already have rejoiced in numerous leading roles, not at least as Lenskij in Onegin, and as Prince in Cinderella, Benvolio in Romeo and Juliet, des Grieux in Manon, and last but not least as Don José in Carmen. He is not yet a soloist in the company, but the crowd is waiting for him being a soloist. He has the right talent. 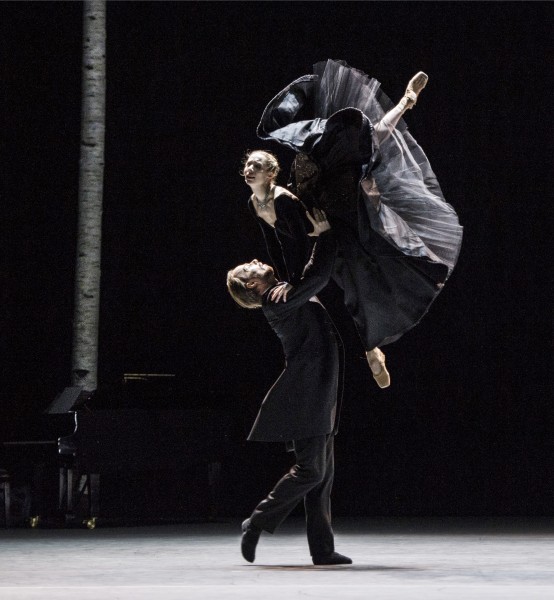 In other roles we enjoyed Dirk Weyershausen, the company´s danseur noble, as Aleksej Karenin, the husband of Anna, he is forming his demanding role splendid, giving it the nobility that it demands, and in the pas de deux parts with ES and in the pas de trois parts with DD showing his elegance and charismatic stage power. 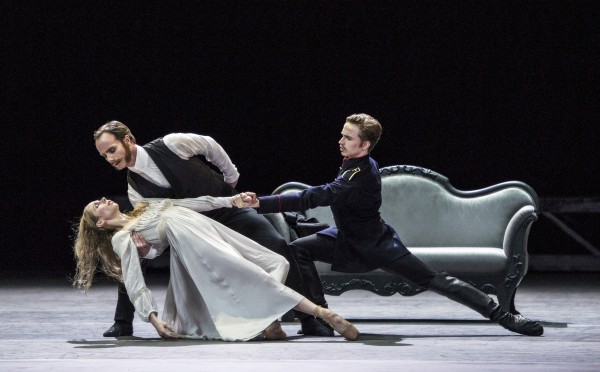 In this production of Anna Karenina, the Ballet continues three major conflicts: As already mentioned between Anna, Vronskij and husband Karenin; Annas brother Stiva and his wife Dolly;  and Kitty and Levin. 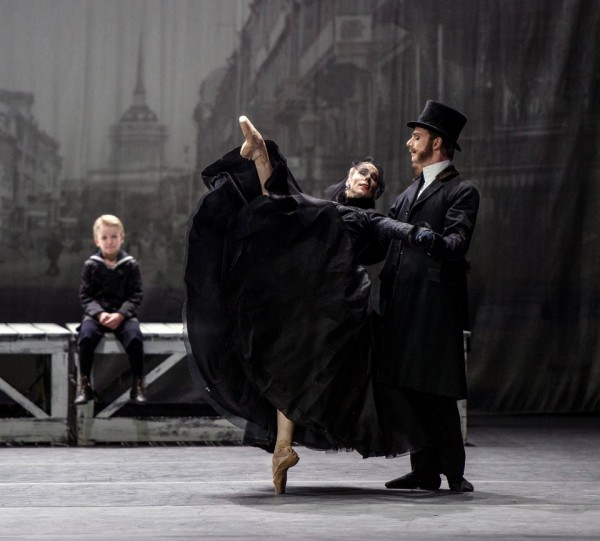 The two other leading couples are  Stiva and Dolly, a problematic couple well performed by Yoel Carreno and Melissa Hough, and Levin and Kitty, well performed by Lucas Lima and Emma Lloyd. Kristoffer Ask Haugland was the little son of Anna Karenina. 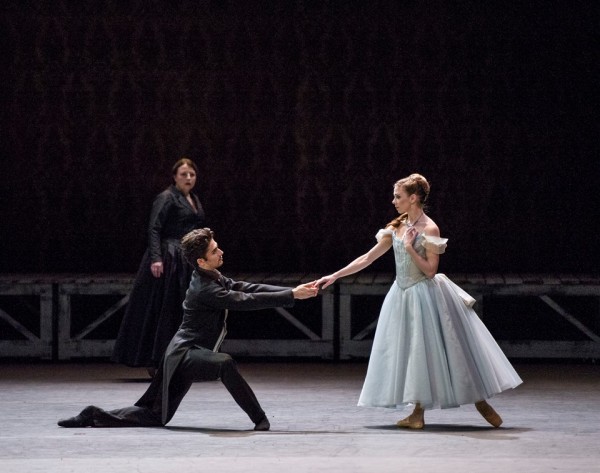 Osiel Gouneo and Sonia Winograd gives us a lot of beauty, brilliance and virtuosity in their dance in the roles as Betsy and her partner. 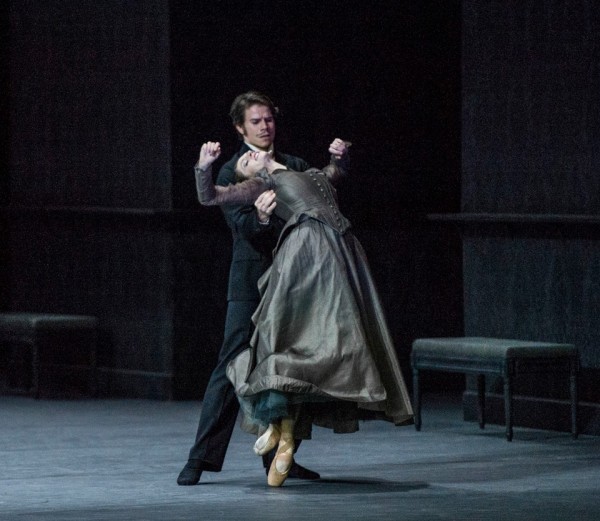 Yoel Carreno and Melissa Houg as Stiva and Dolly in Anna Karenin with the Norwegian National Ballet in Oslo. Foto Erik Berg 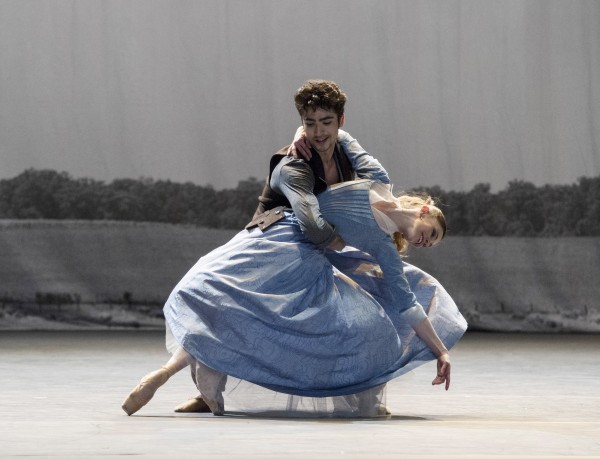 Unfortunately, the really only week part I notice in this production is the scenography, this is, for my opinion too simple. The problem is the large number of stage shifts, and to make these shift without interrupting the progress where the expressive music is part of a longer work, which fortunately has many variations, as much wealth emphasizes action and brings out details, then the choreographer a difficult task. By pulling up a second backdrop, like a curtain creates one powerful and barely excellent background blankets for this. Such as when to experience race, one sees this in a video, while we rejoice exceedingly audience in the stands watching this, but we’re not good enough until the drama happens when Vronskij hems of the horse, because, there is no one, except Anna Karenina, who reacts, who can see that this is Vronskij, he is not visible, neither visibly damaged by hemmed. These back stage carpets are the best basic for the country scenes, first for Levins work with farmers, and later as a backdrop for the beautiful romantic and long, but also for the demanding pas de deux between AK and Vronskij when they have moved to Italy together
. – Where the Choreographer Christian Spuck intelligently is using the Rachmaninoff music from his 2.Pianoconcerto – the long demanding 2nd movement. 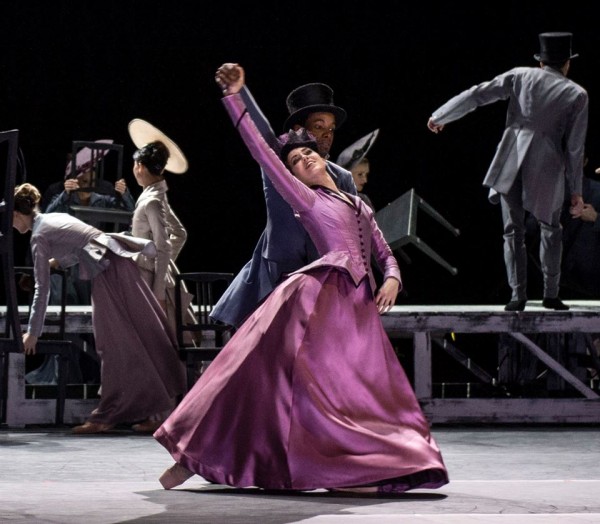 Osiel Gouneo and Sonia Vinograd as Betsy and her Cavalier. Foto Erik Berg

However, with my experience from different Anna Karenina productions, among them Boris Eiframs from Riga and guesting in Paris, and Aleksander Rathmanskijs with Rodion Shchedrin s original music from Vilnius, where Mikael Melbye has created the well functioning scenography, where the stage design is a strong and positive contributing partner, including the racing scene, which is one of the highlights in this romantic drama. The scenography could have been much better, and still made in the way that it was possible not to stop the music for stage changes.

Emma Ryott is responsible for the costumes. For the female dancers, they are wonderful, a lot of beautiful materials in many delicious colors, and in the middle Anna Karenina in Red, White or Black. Delicious. Some of the male costumes are good, specially in the horserace scene, and Vronskijs costume when he together with AK are in Italy. Good for Levins costumes when he is at the country side, but not in the opening scenes. Serjouas costume is good for the little boy. But the costume for Stiva is clumsy, and dont give this beautiful dancer any help to underline his position. The rest of the male costumes are ordinary.

Christian Spuck has choosen an interesting and very well functioning selection of music, which helps his dancers very much to get the many different scenes to function, and some times to lift it to another higher level. From the very romantic and musically beautiful Sergei Rachmaninoff, the contrasting Witold Lutoslawski chooses, and lighting it all up with Paganini. Waking us all up with Martin Donner, Sulkhan Tsintsadze and Josef Bardanashvili is good.  To let the famous Håvard Gimse play all the demanding piano parts is a hit for this production, and gives an extraordinary lift for it all. Last but not least: In addition Spuck picked out some of Rachmaninoff folkesange. They are romantic songs about the faded flowers, loneliness and love that no retaliation. They give us a sense of the Russian national soul, he believes. 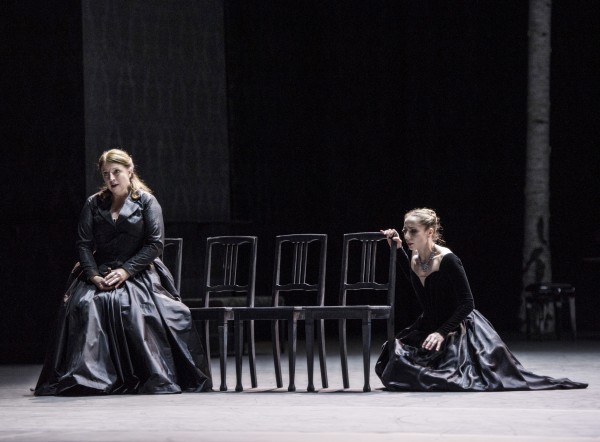 The songs sung by National Opera’s outstanding mezzo-soprano Ingebjørg Kosmo, which onstage shows up as a kind of death – figure. It is Spucks opinion that she should look like Anna Karenina would have done if the female is not killed himself, poor and tired and on the outside of society, says Spuck. She is singing beautifully, and her participation underlines the fact that the cooperation between the opera and ballet parts in the Operahouse is of great importance and gives each their performances something extra.

The soloists, and the choreographer Christian Spuck and his staff. 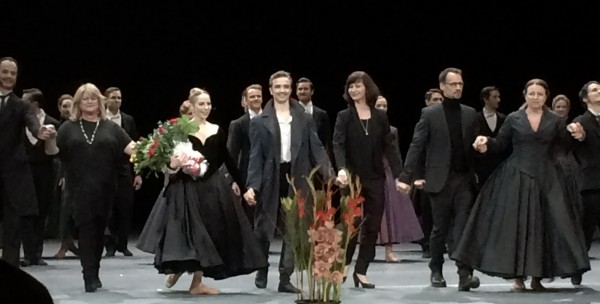 In the center Eugenie Skilnand as Anna, Douwe Dekkers as Vronskij. To the right choreographer Christian Spuck and Ingebjørg Cosmo and a glimpse of Yoel Carreno, left a glimpse of Dirk Weyershausen. furthermore Emma Ryott (costumes) and Birgit Dehired, responsible for the staging.Behind members of the Norwegian National Ballet. Foto Tomas Bagackas