By Henning Høholt on 8/16/13 • Categorized as Festival,Opera

SALZBURG:  ARTE continues at the Salzburg Festival bringing cutural highlights out to many corners of the opera world through television transmission, with the ‘Don Carlo’ by Giuseppe Verdi, under the baton of Antonio Pappano, staged by Peter Stein with Jonas Kaufmann in the title role. A masterpiece combining subtly intimate and political.

This is the war between France and Spain. The marriage of the Infante Carlos with Elizabeth of Valois to seal the peace treaty. What was unexpected happens: they fall in love with each other. 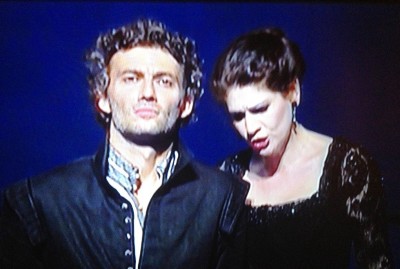 And as, King Philip II decided that he will marry the princess of France. The loved Elisabth becomes stepmother to Don Carlos, and love feeling prohibited.

The version shown in Salzburg is sung in Italian, and happily yet it is the 5 acts version. As the audience also know from the famouse Don Carlos coproduction from 2008  between the new operahouse in Oslo, Metropolitan Opera on New York and Covent Garden, London.

In this first act we meet Elisabeth and Don Carlos and regard that they are falling in love, and looking forward to be happily together. Jonas Kaufmann in the titelrole together with Anja Harteros as Elisabeth does this importent scene briljant, so we trust in the history. 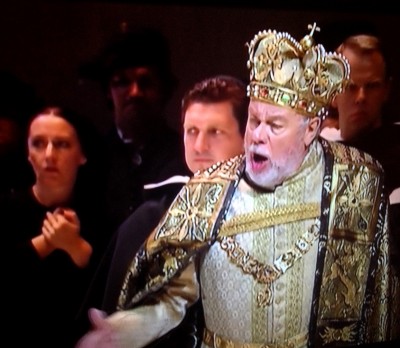 The first act, known as the “act of Fontainebleau” actually belongs to the French version, the version of the world premiere of 11 March 1867 in Paris. For me the first act is of the greatest importence, as in this lays the background for all the conflict later, since elisabeth first was planned to marry Don Carlos, son of the Spanish King Philippe, to make peace between Spain an d France, but then in stead King Henry of France deside that  his daughter Elisabeth shall marry King Philippe and not the son Don Carlos. This cames as an enormeouse chock for the two young lovers.

Among other details, in this Salzburg production we also notice the seldom shown introduction to the third act, where we see some of the gardenparty, which ends up with the catastrophic meeting where Don Carlos believe that he is meating the maske Elisabeth, but in stead it is Princess Eboli,  (Ekaterina Semenchuk) who has got the golden/black lace cape, veil and mask from Elisabeth.  This gives big problems in this affaire, and Rodrigo, Marquis de Posa  (Thomas Hampson), arrives to help Don Carlos. 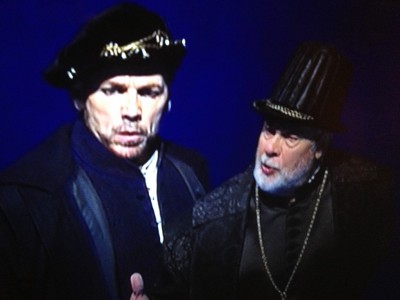 The old, world famouse bas Matti Salminen (born 1945) sing Filippo II with still powerful voice, he is an outstanding example for the deep voices who keeps it going on for a whole life. Matti Salminen knows the role as King Philippe extremely well, he sung that at his debut when he was 24 years old in Helsinki.

Ekaterina Semenchuk, takes godd care of the famouse role as La Principessa Eboli and Eric Halfvarson is the Grand Inquisitore. his deep bass (basso profundo) is impressing.
Anja Harteros is impressing as Elisabeth, as we remember when she sung the same role in Oslo in 2008
. She has lately participated in the new Don Carlos production in Munich.
Jonas Kaufmann has a beautiful voice and he looks real in the titelrole, every one understand the love between him and Elisabeth. However his tenor is more in the direction of a Helden tenor, and  is not italian an “Bel Canto” tenor type, well it is also difficult as in Don Carlos, is needed a voice who can reach out over the big orchestra. These newer styles of singing had arisen as a result of 19th-century operas growing increasingly dramatic, pitting performers against louder and denser orchestral accompaniments in bigger theatres. 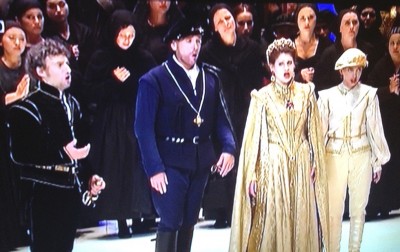 We enjoyed also Robert Lloyd as the old Emperor Karl V, who appears in the Monastery. Thomas Hampson received extra applause, as it is his time no 25 to participate at the Salzburg Festival.

Peter Stein´s regi works very well, good details, an active staging, with good details, that sometimes makes the history touch our hearts. Beautiful costumes by Annamaria Heinreich, spite in that I in the Fontainebleu act was a bit confused, since the style not was particularly neither French nor Spanish.

Antonio Pappano knows the music well, and is controlling the whole music splendid, he still reminds me of our first many meatings, whe he was music chief at the Norwegian Opera in Oslo and together with the famouse danish soprano Inga Nielsen (1946-2008) gave the Norwegian audience many great opera evenings. 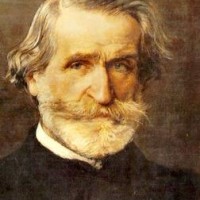 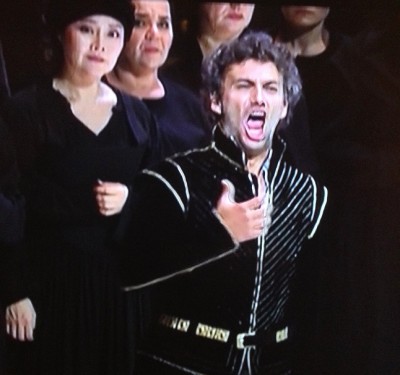 Jonas Kaufmann together with members of the Choir. Foto Henning Høholt

A compliment to the casting departement, who has done a good choise for casting of Don Carlos for this jubilee year of Verdi. It cant be better than this.

This story alone would provide a good subject for an opera. But Don Carlo is more than that: a political drama which face the monarch Philip II, the Grand Inquisitor who embodies the Church and Rodrigue, the voice of the Enlightenment. The latter has a very different politics from the king who nevertheless held in high esteem and lavishes affection. But he can no longer withstand the pressure exerted by the Church … Giuseppe Verdi has made a masterpiece on the dramatic poem by Friedrich Schiller a moving lyrical work, a dark masterpiece that is recognized as the most ambitious and most complete opera .

For the Salzburg Festival in 2013, Peter Stein and Antonio Pappano chose the Paris version of 1867 – the most developed and the most intense – but without the Italian ballet. Thus hear some passages that the composer had to cut. 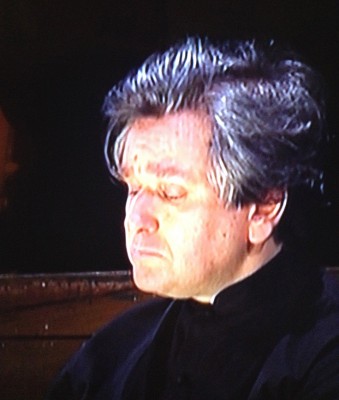