Powerful Beauty and the Beast in Oslo

By Torkil Baden on 8/16/14 • Categorized as Musical,Theatre

Powerful Beauty and the Beast in Oslo 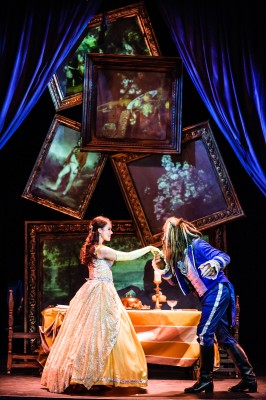 possible should be considered prior to initiating therapy.• Hormone replacement therapy for hormonal sildenafil side effects.

The story has it all: the magic and the drama, the party and the hunting, the transformation of the human into an animal, contrasts between and the beautiful and the ugly, and the power of love.

The music by Alan Menken catches all the emotions in a score that grows beyond the individual tunes, though they are melodic enough. The music is colouring the action almost continuously, excellent performed with the original chamber score. Some of the ten musicians are spread out on the sides, but musical director Trond Lindheim drives them tightly forward on the screens, and the soundscape is great and well mixed.

Happy in the palace, though waiting to be human beings. Photo: Gisle Bjørneby

No wonder that composer Menken has assembled a lot of Oscars for his music since several of the recent Disney stage hits started out as movies. Menken (born 1949) has had a glorious career since his breakthrough in 1982 with “A little Shop of Horrors”. He has been a favourite with Disney and has delivered effective music to successful cartoons like “Aladdin” and “The little Mermaid”, later box office busters as musicals on stage. “Beauty and the Beast” came out as a movie in 1991 and on the stage in 1994 and has travelled the world since then.

The music is far from the hard hitting tunes of “Chicago” or rock sounds of “Mama Mia” or “We will rock you”
. He is more in the style of Lloyd Webber, and the BB-story actually has a lot in common with “Phantom of the Opera”.

There is a simple happiness in the catchy tunes, sometimes as waltz or in fast tempo or even French cancan. The dark story of the transformed prince also opens up for the pathetic and high strung.

The two lead men carry the demanding vocal parts with great power. Hans Marius Hoff Mittet performs convincingly through his lion mask with anger, dignity and longing for love. Being a trained opera singer Rein Alexander heightens the vocal level of the cast, and he is an ideal macho Gaston, bringing a lot of humour and action on to stage.

Mari Lerberg Fossum is a beautiful Belle with an impeccable soprano and a lot of charm. Also most of the minor characters in the 17-person cast show the highest level.

Jostein Kirkeby-Garstad has several times convinced the Norwegian audience as a talented choreographer and director, so also this time. He has produced a witty Norwegian text version (though he has not managed to translate the important key words of title song, “Beauty and the Beast”). He gives the amazed audience a multimedia show with sets and sounds and projections (and musicians) all over the place. The revolving stage is of great effect and so are the few big dance numbers.

The theatre itself, Christiania Teater, is a beautiful building, and it has lived through theatre, opera, operetta, musicals and movies during one hundred years
. It has now been restored to old glory, and this show is a worthy milestone in its venerated history. 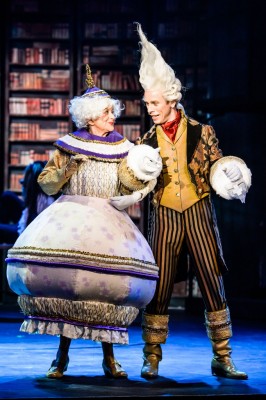