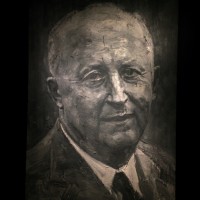 PARIS/FRANCE: The Musée des Arts Décoratifs is celebrating the 70th anniversary of the creation of the House of Dior.

This lavish and comprehensive exhibition invites visitors on a voyage of discovery through the universe of the House of Dior’s founder and the illustrious couturiers who succeeded him: Yves Saint Laurent, Marc Bohan, Gianfranco Ferré, John Galliano, Raf Simons and, most recently, Maria Grazia Chiuri. 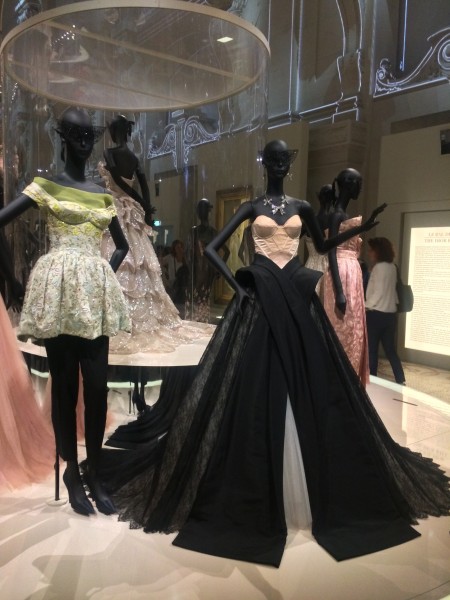 As international critic it is always a pleasure to enjoy and write about the expositions at this place, as the professional presentation, and following up, is of the highest possible niveau. 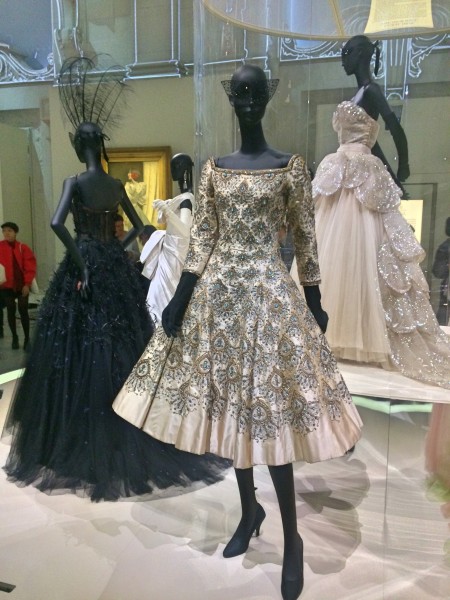 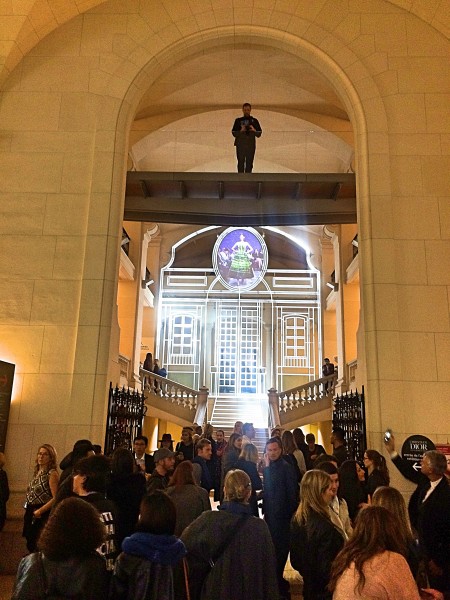 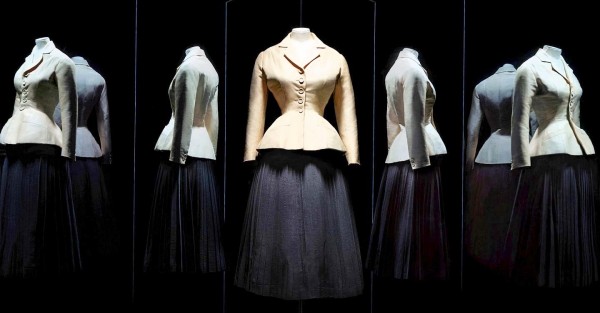 70th anniversary of the House of Dior

The Musée des Arts Décoratifs is celebrating the 70th anniversary of the creation of the House of Dior from 5 July 2017 to 7 January 2018. 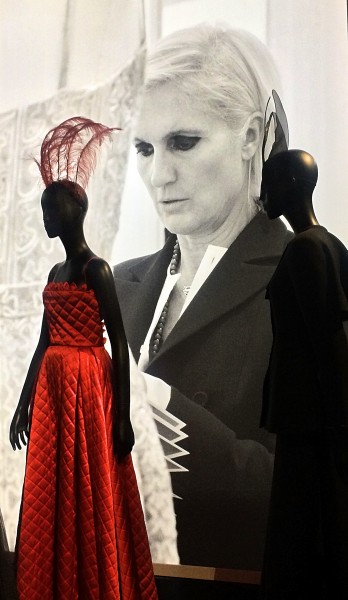 This lavish and comprehensive exhibition invites visitors on a voyage of discovery through the universe of the House of Dior’s founder and the illustrious couturiers who succeeded him: Yves Saint Laurent, Marc Bohan, Gianfranco Ferré, John Galliano, Raf Simons and, most recently, Maria Grazia Chiuri.

The selection of over 300 haute couture gowns designed between 1947 and the present day has a unifying thread of emotions, life stories, affinities, inspirations, creations and legacies. Alongside the dresses is the most wide-ranging display to date of atelier toiles and fashion photographs, as well as hundreds of documents, including illustrations, sketches, documentary photographs, letters and notes and advertising documents, and fashion accessories, including hats, jewellery, bags, shoes and perfume bottles
.

Reflecting the fact that Christian Dior was also a knowledgeable art lover who adored museums, designs from over 70 years interact with a selection of paintings, furniture and objets d’art. 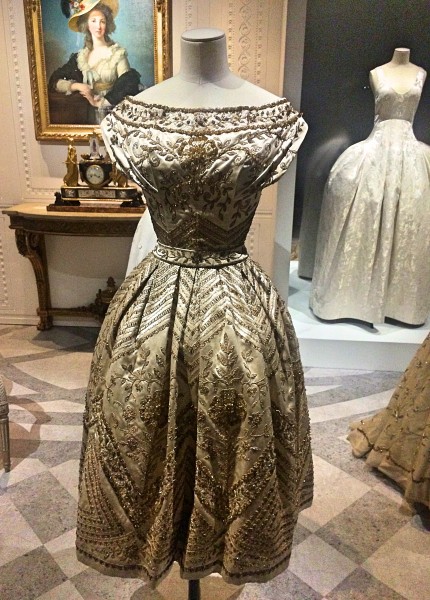 These works highlight and develop Christian Dior’s outlook by exploring the ties he forged between couture and all forms of art, defining the House of Dior’s enduring influence
. 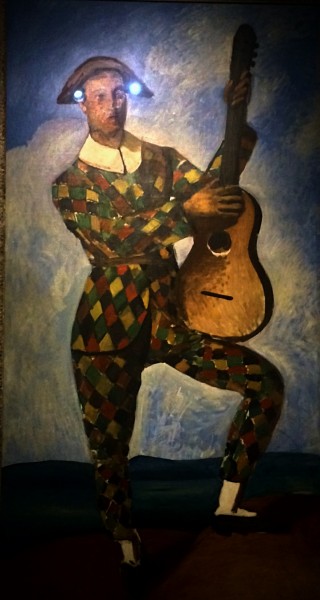 Harlekin, one of the art pieces from Diors house. Foto Tomas Bagackas

The two curators, Florence Müller and Olivier Gabet, convey their message with a chronological and themed exhibition design that inhabits and brings together the museum’s fashion areas and the nave for the first time, a space of almost 3,000 square meters. 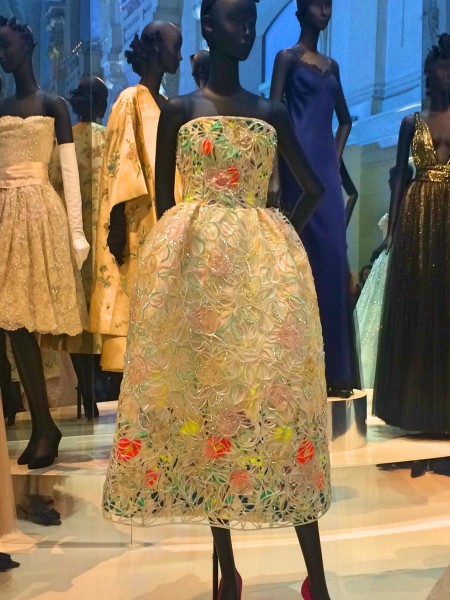 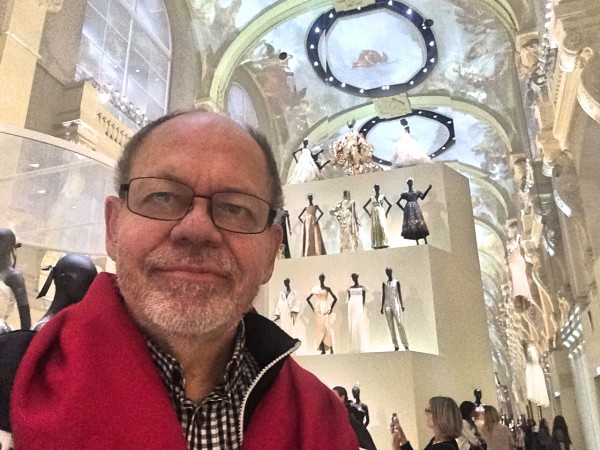 To celebrate the House of Dior’s seventieth anniversary, the new retrospective shows how Christian Dior and the six artistic directors who followed on his heels devised the brand and built up the influence of a name that is the very embodiment of haute couture in France and throughout the world. 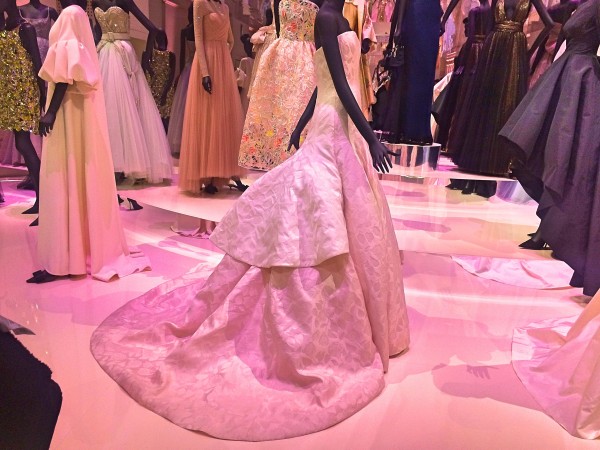 Yves Saint Laurent, Marc Bohan, Gianfranco Ferré, John Galliano, Raf Simons and today’s director, Maria Grazia Chiuri, have all drawn on their own creative sensibilities to formulate a style and a vocabulary that stay true to the original concept and to help define the House of Dior’s identity through the prism of its relationship to its era. 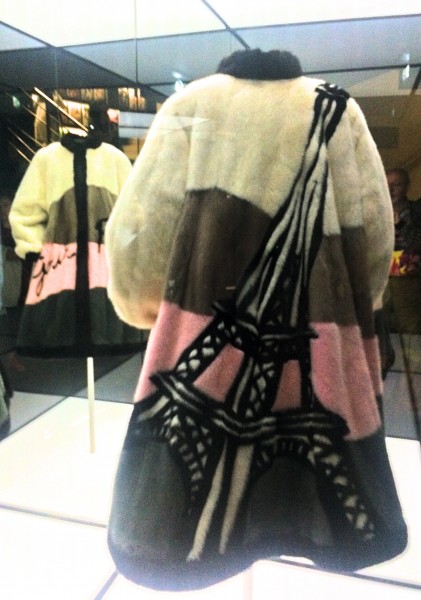 This exploration of haute couture is enriched with Frédéric Castet’s fashion fur designs, beauty creations by Serge Lutens, Tyen and Peter Philips, as well as perfume creations by François Demachy. 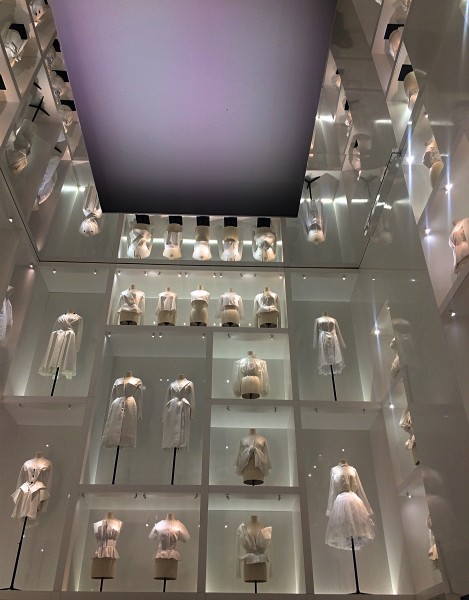 In all the important couture houses the staff starts working in toile, so that they can start on the models, without starting cutting in, and in the worst case, eventually spoling expensive materials. This is taken care of in a whole room in the exposition, which is full of toile pieces.

A toile model, on which the developing of this model is sketched with a black pencil. Foto Henning Høholt 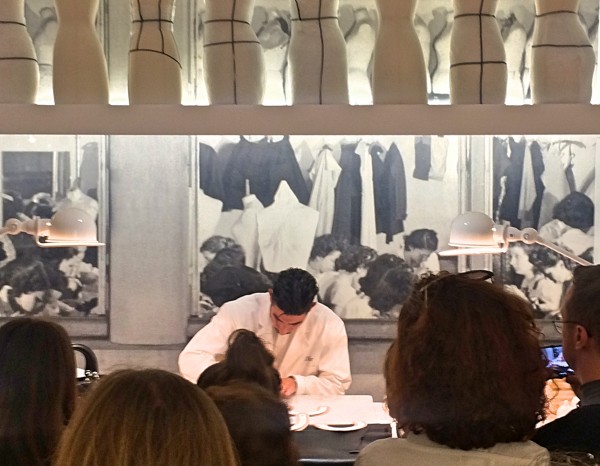 In connection to the Toile part, a handworker is presenting the audience, how he works with leather goods. Foto Tomas Bagackas

A leading figure in the world of 20th-century fashion once he launched his New Look spring/summer collection in 1947, Christian Dior took the feminine shape in a totally new direction, relegating the masculine silhouette of the war years to the past
. 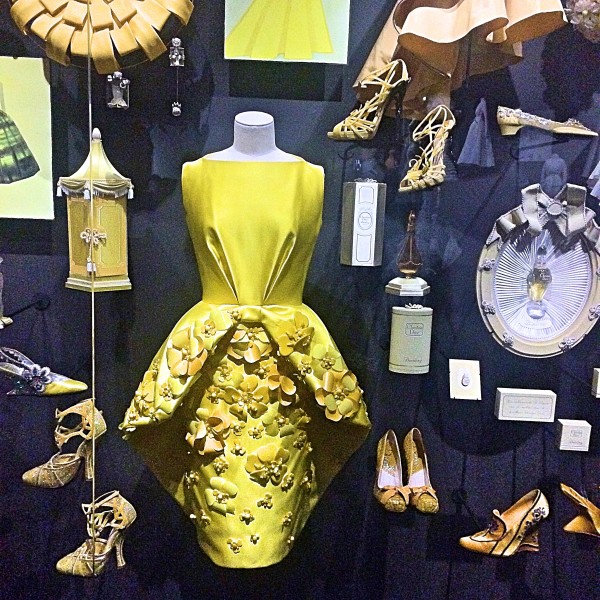 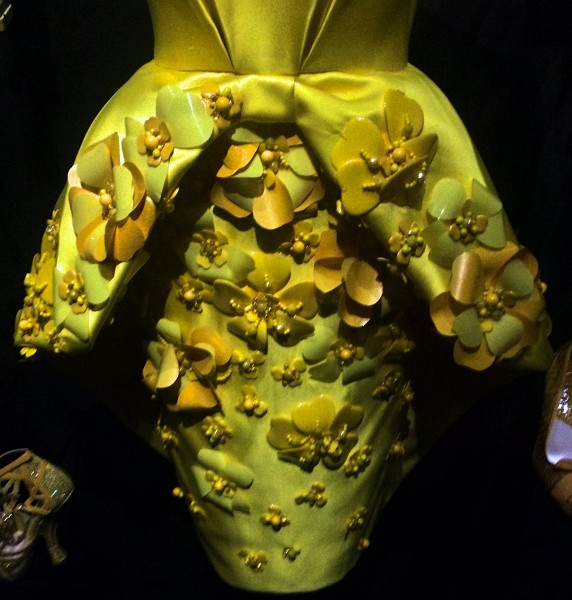 His dresses expressed a modern femininity, incarnated by his flower woman and producing a shape characterised by flowing curves and the bearing of a classical ballet dancer. 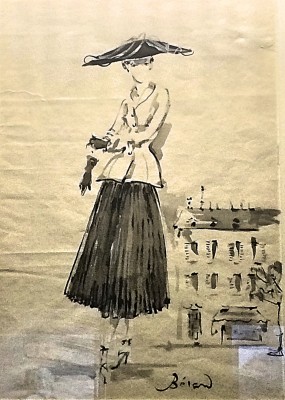 Christian Dior relaunched the textile industry with his insistence on the use of great swaths of fabric, a controversial move after the years of shortage under the Occupation.

He succeeded in breathing new life into the couture tradition, giving a central role to embroiderers and craftspeople making costume jewellery and accessories.

He invented an internationally-focused couture that put Paris back in the spotlight as the capital of fashion. 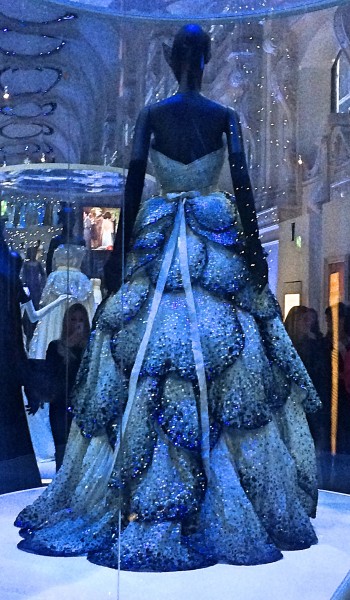 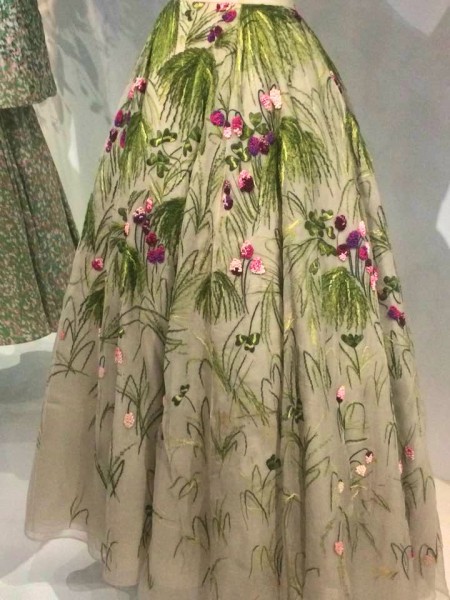 The visit continues in the nave with a chronological display spanning the 70 years from 1947 to 2017, showing the energy that set it all in motion and the legacy of the Dior spirit down the years. The iconic shape of the Bar suit that embodies the New Look opens the door to this voyage through time. The black-and-white ensemble demonstrates every aspect of the innovation Dior introduced with his new aesthetic, triggering a golden age of fashion. The suit has continued to haunt the imagination of the fashion world and many of its couturiers and designers ever since.

If they were not famouse when they arrived to the Dior house, then they became famouse, of course, as we all know, some more famous than others. The daring choice of the very young Yves Saint Laurent was followed by Marc Bohan’s more rational appointment. Next came the flamboyant arrival of Gianfranco Ferré, the dramatic era of fashion punk John Galliano, the minimalist statement of Raf Simons’ appointment and, lastly, the choice of a woman, Maria Grazia Chiuri, and her feminist vision of fashion.

The expertise and techniques that are the lifeblood of haute couture are presented in an atelier where seamstresses are at work, surrounded by models, dressmakers, sketches and toiles. One of the galleries provides an overview of how the Dior line and allure have developed since 1947, illustrated with gowns and extracts of films and catwalk show videos.

Developing of the Dior line:

One of the galleries provides an overview of how the Dior line and allure have developed since 1947, illustrated with gowns and extracts of films and catwalk show videos. The exhibition ends in the lavish setting of the nave, transformed into a ballroom for a presentation of a series of truly sumptuous ball gowns, including several glittering creations seen together for the first time in Paris.

The Dior house of course cooperated with a lot of outstanding photographers, Please enjoy a charming elephant picture, photographed by Jean-Paul Goude. 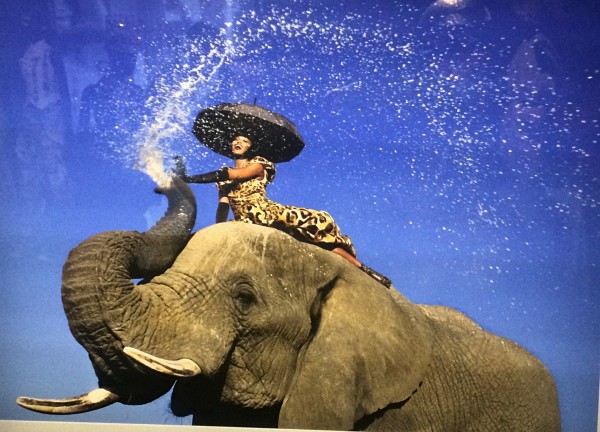 Some of them have been worn by famous customers who have helped to build the success of the House of Dior, including Princess Grace of Monaco, Princess Diana, Charlize Theron and Jennifer Lawrence.

Most of the works that feature in this ambitious project are from the Dior Héritage collection and have never before been seen in Paris. 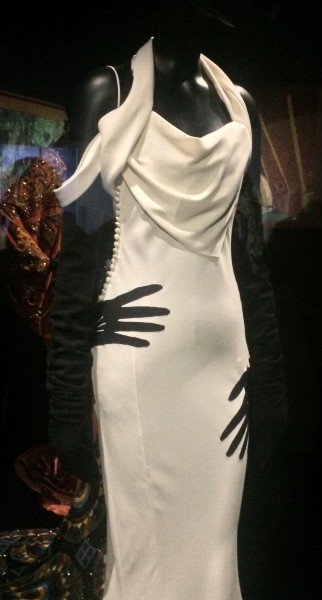 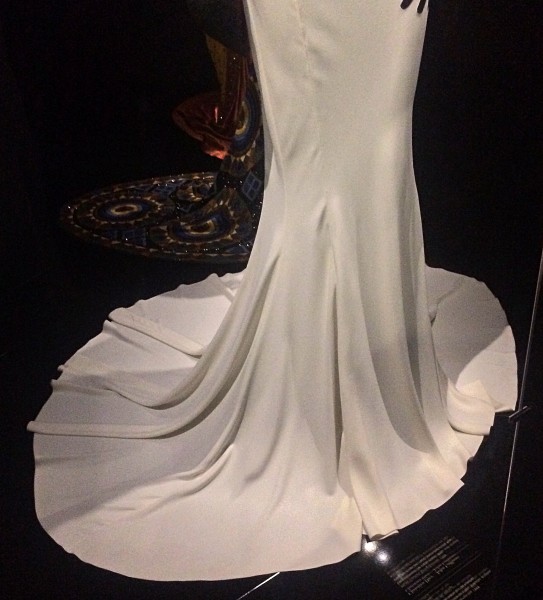 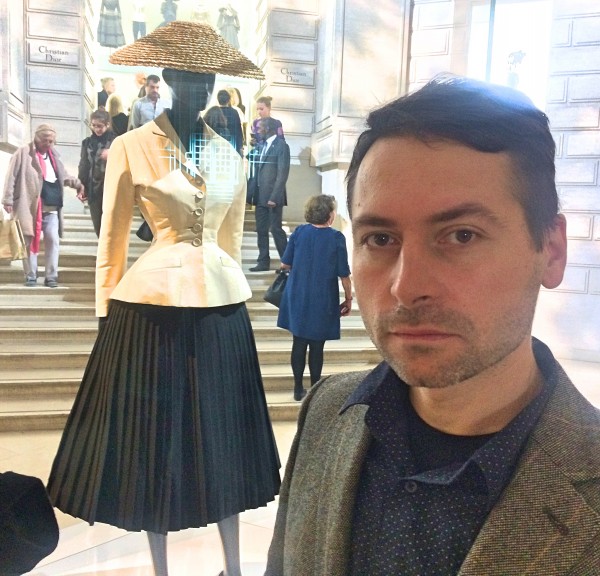 Tomas Bagackas and New look at the Dior exposition 2017