and much more of Spanish pearls

COSTA BRAVA/SPAIN: Girona is a central city in the famouse area, Costa Brava, near to Barcelona is a beautiful pearl for holidays in the North Eastern part of Spain, where we in sunny October days had the pleasure of visiting Girona, inclusive the places, in the old part of the city where parts of Game of Thrones has been photographed. 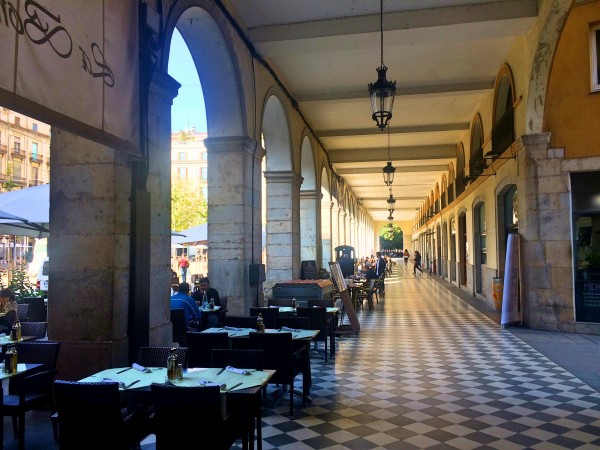 Girona. Its medieval walls, Romanesque and Gothic landmarks, along with its baroque buildings and Jewish Quarter – which is one of the best preserved in Europe – invited us on a pleasant stroll. Enjoy exploring the streets and seeing our reflection in the river Onyar, which runs through the city centre flanked by multi-coloured houses and straddled by charming bridges. You won’t be able to resist the temptation to take a photo! 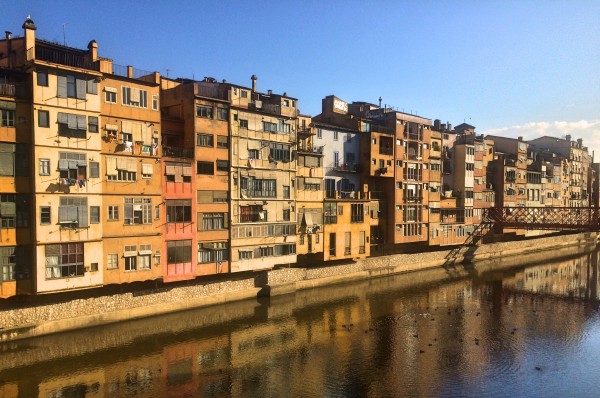 It was an impressing meeting with the beautiful city Girona, app. 100.000 habitants, Girona is located 99 km northeast of Barcelona
. Girona is one of the major Catalan cities. Where we enjoyed our first meeting with the real Spanish Tapas at a delicious restaurant situated out to the central square in the city, and with the picturesque canal just behind. 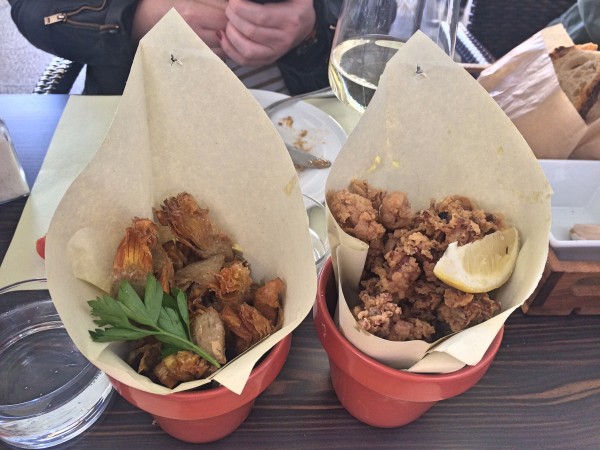 Around the central square The Plaça de la Independència, which refers to the War of Spanish Independence against Napoleon Bonaparte is one of the best known and most frequented places in Gerona where app 20 restaurants and cafés are situated, where the favorite drink ae being sewer every where – Calomucho, which is rewind with cocacola. Lunch is the main meal of the day, dinner is smaller. We tasted an excellent Tapas lunch inclusive Chaperon – small octopus.. 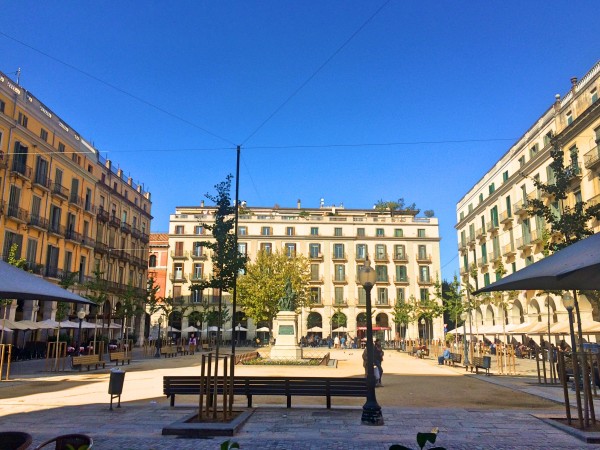 – Onyar river but in the center formed like a canal. Characteristic of Girona are the picturesque houses overlooking the river Onyar. These were built over many years and give the flavour of a small Mediterranean city. 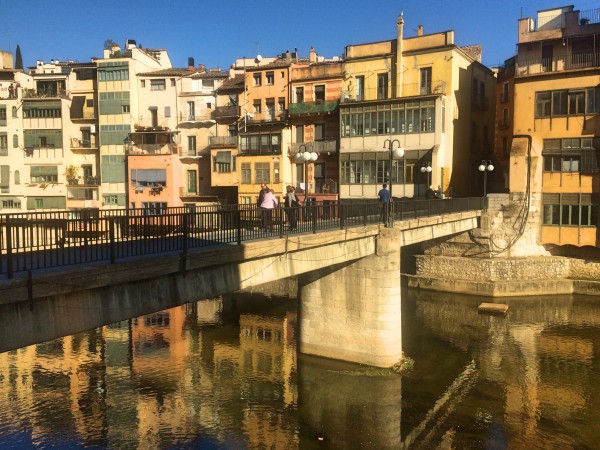 The façades are painted according to a palette created by Enric Ansesa, James J. Faixó and the architects Fuses and J. Viader.with houses directly to the canal, but unlike in for example in Venezia, Italy, the entrance to the houses is from a tiny street, and not through a seaside entrance. The city is called the city of the four rivers. Big Carpes are seen in the river.  – 25 year ago Gerona got its own University, and it is now home to 18.000 students, studying information, robot-tics. There are many Erasmus students, and there campus. 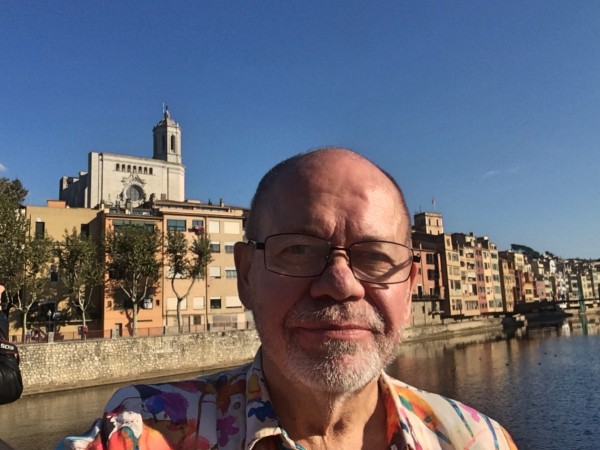 Another view, with selfie of the editor,  of the river with the Cathedral, situated in the city part that was used for the famouse serial “Game of the Thrones. Photo: Henning Høholt

From the central square only a short promenade towards the river/canal to cross the bridge to the magnifique old part of the city which has been center for filming the famouse TV serial: 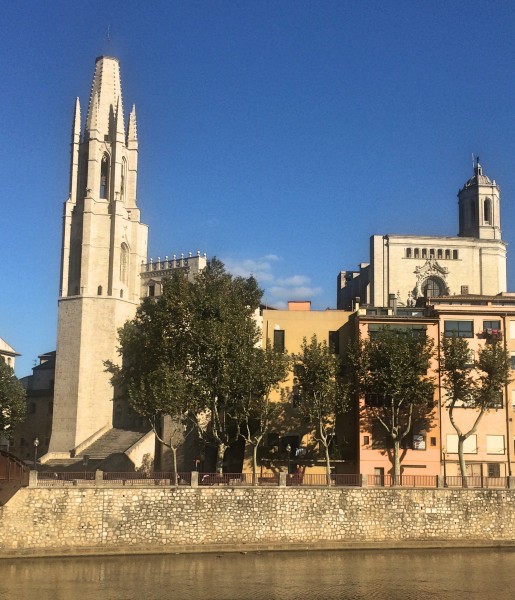 The Collegiate Church of Sant Feliu, as seen from the river Onyar. Right is Tower of the Cathedral. Photo Henning Høholt

There is a tradition of kissing the sculpture, then you will for sure return to Gerona. And a long queue of tourists and press, and others was enjoying to be photographed by their friends and colleagues

We will return to present photos of some places in the Old City part which were used for TV serial “The Game of Thrones”. 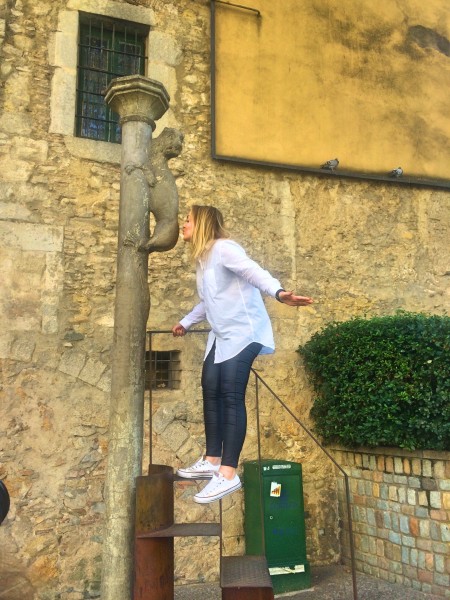 It is said, that if you kiss this sculpture, you will be sure to visit Gerona again: Therefore People kissing the sculpture.